A Total Conversion for Unreal Tournament 2004

I’ve spent this weekend being reeducated to the fact that simulations aren’t just in the air. Some of the best of the current generation model land combat, such as the acclaimed T-72 Balkans In Fire and the excellentSteel Beasts series. But we really haven’t seen this applied to the ubiquitous first-person shooter. The vast majority of these cater to a crowd that’s alien to simmers. In most FPSs, the player becomes John Rambo, the killing machine. You don’t get the “feel” of a true military reenactment. Have you ever seen military re-enactors? Civil War buffs have been doing this for years. They collect period-correct reproduction uniforms and weapons, and reproduce the feel of fighting in the Civil War. They also have a lot of fun doing it, unlike the real thing. We can’t all afford to do this; military reenacting is really expensive and time consuming.

We’ve all seen the explosion of first-person shooters and multiplayer FPS style games. I lump games such asEverquest and World of Warcraft into this genre along with World War II Online and Operation Flashpoint, because the main things separating most of them are the period of time they’re involved in and whether magic is or is not a feature. Unreal Tournament is such a game. Unlike the subscription-based multiplayer-only role-players such as EQ, though, UT is all about – I should say ONLY about – killing your enemies in style. It is highly developed and has a lot of fans. Unlike the traditional RPG / FPS games, there is no subscription fee, making it attractive to gamers on a budget. It has modes ranging from deathmatch to cooperative squad-based fighting, and I think it was probably inevitable that military simulation fans would discover its potential. Military simmers all over would like to get into a realistic and persistent first-person world that encourages use of real-life tactics and teamwork. Don’t believe me? Take a look at the phenomenally successful Operation Flashpoint. Many industry-watchers think that OFP is the model for future military games. Unreal Tournament, as a sci-fi shooter, has potential out of the box for using actual squad-based tactics in the game environment.

Making UT even more attractive to military gamers is its potential for modification. Recently, video-card manufacturer NVIDIA even had a competition called “Make Something Unreal,” where mod-makers using the Epic Games provided SDK for UT were given the chance to compete for a one million dollars prize for best mod out there. Thanks to the above-and-beyond efforts of Red Orchestra team PR mogul Alan Wilson, I’ve spent the weekend taking a look at the winner of that competition. 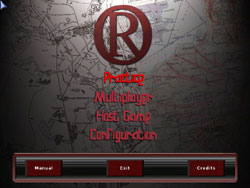 Did you like the movie Enemy at the Gates? You will love Red Orchestra: Combined Arms. RO is a total-conversion mod of UT, and it has so far been more than two years in the making. Versions of RO came out for the award-winning Soldier of Fortune and Medal of Honor FPS games, in fact; military gamers have been wanting a team-based, objective-based combat game for an awful long time. The original idea for RO was a single-player role-play type-game, based on the activities of a Soviet spy ring operating in German-controlled areas up to about 1944. It morphed after that into an infantry fighter, and has expanded farther still. In its current incarnation, RO follows the Eastern Front fighting of World War II. As you will see, the team has modeled period-specific soldiers, weapons, and even vehicles into very realistic maps. It’s an enormous amount of professional-grade work.

We’ve included a link to the well-done trailer based on the Krasniy Oktyabr (Red October) map within the game, that the team sent me as part of the press kit. Download the trailer here from their web site and take a look. I defy any corporation out there to do a better trailer for a game. This is actual in-game footage and it’s better than any FRAPS movie I could give you.