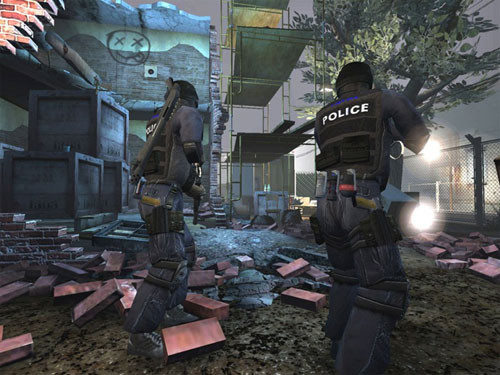 The optiwand is your third best friend; the first is your partner/team and the second is your primary weapon. Every single door, every single corner, every single room should be mirrored. If the element leader says “Red mirror the door”, Red One (w/o the optiwand) covers in case the bad guy opens the door while being mirrored. Red Two (with the optiwand) checks the door and should respond to the team, something like this, “Large room, long wall on left side, 2 more doors on right, 1 armed subject next to hostage.” Then the element leader orders how the team will enter.

Every door is a new entry, a new situation. After getting the optiwand report, the element leader decides on entry, “Stealth entry, pick lock” or “Dynamic entry, breach with C4, bang and clear.”

You should already know if someone’s in the room, (but don’t assume there isn’t a bad guy hiding there) and already have a general idea of the room layout, walls and doors from the optiwand users report. You already know your element leader’s orders for entry. So when it’s time to enter, the element leader should say “Element (or just red/blue team) prepare for entry, Blue team breach, bang and clear… go when ready” The blue team will be up against both sides of the door, with the two red officers behind each of them. Blue One would prep the door for blasting or breaching; Blue two would prep the flash bang. As the door blows open, Blue One switches to his weapon immediately, Blue Two tosses in flash bang then immediately switches to his primary weapon. BANG… Blue One enters. Blue Two enters, moving down the left and right sides, while Red One enters to the left. Red Two enters and moves to the right. In order of entry, you report “all clear”, or “subject down”, or “subject surrenders”. (ie: Blue One: “Clear!”, Blue Two: “Subject down!”, Red One: “Clear!”, Red Two: “Clea!”.) Then the element leader walks in like the king and orders the officers to restrain, report, or cover the next threat/area.

a) Old school, Button Hook: When two officers each stack up (setting up) on both sides of a closed door, once the door is opened or breached, officer 1 enters and clears from 12 o’clock to the position he was in outside of the door. Meaning if you stack on the left, you go in and turn left to be on the left side of the room and vice versa on the right side.

c) New school, Wall Flood: When either 2 or 4 officers stack up even on each side of the door, then once opened or breached they all enter in order: 1, 2, 3, and 4… 1 moving to the left, sliding down the wall, 2 moving to the right, sliding down the wall, then 3 moves to the left half way downl, then 4 moves to the right half way down… All officers then move in line formation to clear the rest of the room.

d) New school, Penetration: When a team of 4 officers enter a room simultaneously and move to the middle of the room facing outwards to cover and control a quadranl.

You should be working in pairs (NEVER leave your wingman) when moving down a hallway or an open danger area. One 2 man team stays back to provide cover across the danger area or one side of a hallway. The other two man team moves across the danger zone quickly to their destination. When going down a hallway, one officer should be duck walking (kneeling) while the other is standing behind him, two weapons downrange. You should also stay on one side of the hallway so your back up team has a field of fire.

Always reload before entering a room or before stacking (setting up) on a door. ALWAYS go in a new room with a full mag.

If your moving through a danger area, or hallway while engaging and you need to reload, yell “Reloading!”. Kneel down and reload, while your number 2 officer, your best buddy, is covering or firing over your head down range. When done, yell “Ready”. Do not move while you reload, stop, kneel and reload, while your buddy covers you and vice versa.

Practice, Practice, and Practice. Train so that when you do these missions you and your team work flawlessly and smoothly. Never leave your best bud ever, and never go running after someone on your own, or without clearing areas first.