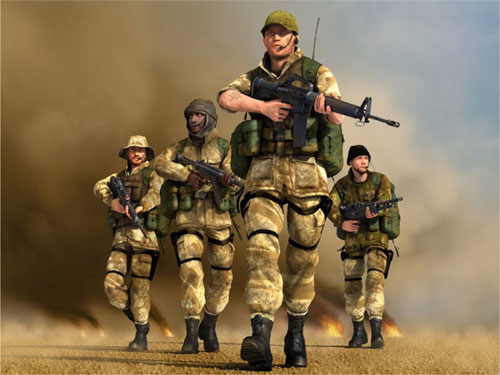 Whether you’re playing the most realistic military shooters, like America’s Army and Ghost Recon, or the latest Run and Gun like Joint Operations or Battlefield 2, the team with the best tactics, along with the best skills will usually win. Here are just some basic tactics to know and use. Working as a team, even in a run and gun, will reward your team with more wins and less failures. More guns downrange working together will almost always beat a single gun – no matter how good that gamer is.

The key to good teamwork is communications. You can use the in game comms if you wish, but the best way I have found to communicate with my comrades in arms is via a team speak server or similar program.

You need some discipline when using the communications server. If everyone is talking at once, then no one can hear orders. The squad leader (or team leader) is the one who should do most of the talking. The soldier should be listening and carrying out orders. You should only be reporting mission critical information back to the leader, or calling out enemies you spot or are engaging. (While alive only, once dead it’s called ghosting, and not proper.)

Either before your team joins the game or while your picking servers, sides or teams, or waiting for a game to load or start, discuss a plan. Once again the guy who has either been picked as the leader or the guy randomly assigned as the leader should get to select the plan. If it’s an objective, assign teams or members to move out as a unit. If you want to keep it as real as possible, then the best way to organize teamwork is by assigning members to teams. The leader would be the squad leader, and then you can have 2 to 4 separate teams, usually referred to as Alpha team, Bravo team, Charlie team, and Delta team. You could also have a sniper team which I like to call Sierra team. A sniper team consists of a sniper and a spotter. Your teams should ALWAYS stay together, never separate; they need to operate as a unit. You might say something like, “Alpha team approach objective from the south, Bravo team move out to the right and flank objective.” Whatever the plan, have one, share it, and keep it simple stupid, KISS. No need to have a detailed plan because most of the time things don’t work out as planned and there’s a need to be flexible. That’s where your leadership skills come in. When a plan starts to fall apart, change it even if you have to retreat, go defensive, and then form a new plan for the objective.

A little side note: even if you’re not playing with a group that you know, or have contact with, no one should ever be alone. If you see another player running off on his own then team up with him. No solider should ever die alone.

Also, if you’re planning a game with a mission goal, never forget the goal. To play the game the way it was designed, you and your teammates should strive to reach the assigned goals. So many times I’ve heard and seen gamers tell everyone to stay away from the mission so they could get more kills If that’s want you want, then I would suggest another game or maybe a single player game for you.

Know your equipment and how to properly deploy it. If it’s your assigned primary weapon like the M16, M14, G36, or AK47, know how the weapon fires, how it recoils, what modes of fire it has, and what type of sites you have, (iron sights, red dot, or other.) You don’t want to waste ammo so you should strive to control your burst. If you’re a sniper, or laying in ambush over a nice big area target, then maybe a single shot will work best for you. Remember one shot, one kill, (usually only in the head in computer games, otherwise it may take a couple of shots). If you’re on a suppression team then automatic should be your mode of fire. You want to keep rounds going downrange, to keep the bad guys ducking for cover. If you’re on regular patrol, or walking through the streets, mountains, or jungles then a three round burst should be the rate of fire choice. You get more control on automatic, and get more rounds at the target then with just the single round of a sniper. A little gaming note: if you have a slow connection to the Internet then automatic or at minimum, three round burst should be used. Because of the nature of pings and lag, if you shoot one round at a target, that target may not be there by the time the other player or host server gets the round projection.

Also know how to use your alternative weapons. In some games you may have a pistol as a sidearm; most that I play give you access to grenades. A fragmentation grenade is a killer, when it explodes friends and foes within a certain radius will be killed or seriously wounded. Know the range of the grenade blast and warn your teammates that a frag is going out, so they don’t decide at the same time to run into the blast radius. A flash bang is used to stun people in a room or closed in area and once thrown your team can enter to clear a room or to engage bad guys. A smoke grenade is used to provide concealment for your team to move to a new location. It is especially useful when you and your team need to cross a danger area like an open area. Toss a couple of smokes, wait about 20 to 30 seconds, and then move from point A to point B. Just remember to keep close to your team mates for proper support and engagements, but not too close that one fragmentation grenade is going to wipe out the whole team.