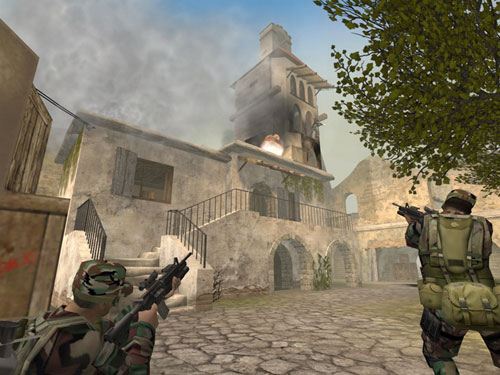 Previously I said that the most important part of teamwork is communications. Probably the second most important part is playing the role you are assigned. Too many times I have joined a open multiplayer game and as soon as the game starts, people start running off on their own to do their own Rambo action flick. If you’re going to do that, then I recommend Doom or Half Life. If you’re going to play a great team game like America’s Army or Battlefield 2, then follow your assigned role as part of a squad or team. If you’re the Sergeant in Charge, (usually called the platoon sergeant or squad leader, depending on the size of the team) then take charge and start issuing orders. If you’re the private in the group, shut up and listen to your orders. Then follow your orders out to the best of your ability. Even if you don’t agree, let the player who is assigned the task of leader lead , you’ll get your turn soon enough. I’ll break down the most common roles and try to explain which task is assigned to each.

In a squad, there is a squad leader and usually 2 to 4 teams.

In a team there is usually a team leader, a rifleman, a grenadier, and a machine gunner. Each team should operate as one, supporting each other.

A squad leader is usually a Sergeant with a number of years in service. He is in charge of a squad which normally consists of 10 to 12 members. He receives the mission from above and then determines how best to utilize his squad members to accomplish the task. He is the one that forms the overall plan for the mission at hand. In computer games, it’s always nice to rotate who will be the squad leader either each mission, or each round of missions. That way every gamer gets a chance to show his leadership skills. If you receive an order from your squad leader, you should do everything in your power to follow those orders to accomplish the mission, even if you think you have a better way. Wait your turn to lead.

The quotations below were taken from the America’s Army description pages, all released in fan kits to the general public. I found these while researching after I wrote my similar paragraphs.

“US Army soldiers work as a member of a squad. Squads are lead by the Squad leader, who has the rank of Staff Sergeant (SSG). Armed with the same weapons as a rifleman, he is fast and maneuverable. Additionally all SSGs are equipped with binoculars. SSGs also can use the squad radio to issue commands.

Your primary responsibility is leadership in combat, requiring competence, character and skill. Squad Leaders take charge by synchronizing the efforts of their fire teams. Armed with the M16A2 rifle or M4/M4A1 carbine, the Squad/Team Leader accepts overall responsibility for the success or failure of accomplishing the mission.”

“Each squad is divided into 1-4 fire teams each having their own purpose. The leaders of these fire teams are Sergeants. Their purpose is to lead their teams to execute a command given by the squad leader in order to complete a mission. Since they are also armed with a rifle, their capabilities are the same as the SSG and rifleman. SGTs also are issued binoculars. This soldier is a fighting leader, assisting the squad leader by taking charge of a 3-person fire team. Armed with the M16A2 rifle or M4/M4A1 carbine, the team leader controls the actions, movement and placement of fire of his fire team.”