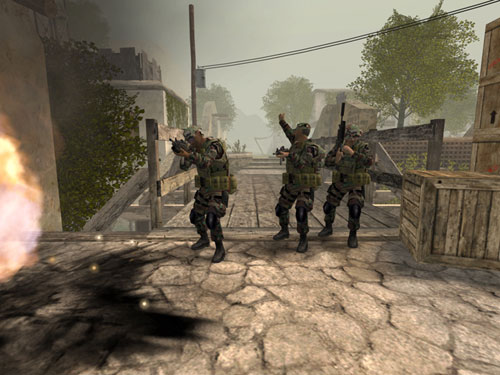 The machine gunners carry the heavy weapons. One should be assigned to each team, but if you only have one then assign it to the main team that will suppress any enemies encountered. The machine guns like the SAW or M60 are used to throw as much lead as possible downrange. If you have the machine gun then use it. If your team is moving to an objective and you get ambushed or start taking fire, the machine gunner along with his team should dive to nearest cover and get that weapon rocking. Even if you don’t know exactly where the fire is coming from, just a general direction, and then lay down some fire. The other team should then be flanking left or right, to pin point and destroy the enemy while there hiding from the awesome hail of bullets coming from the machine gun.

“Armed with the M249 SAW, the automatic rifleman combines awesome firepower with quick maneuverability. The automatic rifleman is essential in providing overwhelming volumes of suppressive fire from medium to long range. No fire team is complete without the Automatic Rifleman. The Automatic Rifleman provides a fire team with a belt-fed machine gun. The M249’s high rate of fire and large ammunition capacity gives a squad/fire team a weapon that maintains a consistent rate of fire to provide cover for the unit. However, this weapon has its drawbacks, particularly weight. Due to this, the automatic rifleman is the slowest among the classes available.”

The grenadier usually has a M203 grenade launcher attached to his M16. He uses his weapon just like any rifleman, but when a little more power is needed he switches to his secondary fire mode and lobes a couple of 40 mm rounds into certain areas. You need to be a good shot and practice with the 203. If you miss your target, you could end up killing or wounding your own fellow soldiers. Most of the time you would use the M203 to clear out a window where there is enemy fire, or a place where the enemy has bunkered into and your regular riflemen can’t reach.

“The grenadier is a key member of the U.S. Army fire team. Armed with an M16 and M203 grenade launcher, the grenadier can deliver explosive fire at point and area targets from medium to long distances. The grenadier is capable of sending 40mm high explosive grenades a great distance away, providing support fire for the fire team / squad. Additionally grenadiers also have a fully functional M16A2. Each fire team has one grenadier. Since their role is support, grenadiers also carry a larger inventory of smoke and stun grenades. However, their fragmentation grenade inventory is greatly reduced, since they already carry 40mm grenades.”

The rifleman is the backbone of the team or squad. While the sniper team is usually off on their own, and the machine gunner and grenadier have their own roles, the riflemen provide the detailed fire on targets and cover their fellow soldiers while they employ their tools of war. There will be more riflemen in a squad then anything else. If a grenadier or a machine gunner goes down, then a rifleman should pick up that weapon and take over the role.

“The rifleman makes up the bulk of the infantry squad. To make the rifleman more versatile in all types of combat environments, they are equipped with a variety of rifles and grenades. The purpose of the rifleman is to complete his mission, give covering fire and act as a maneuver element (when organized into fire teams) to execute the squad leader’s plan.”

Like I said, sniper teams consist of two members. One is the primary sniper, while the other is the spotter. The Sniper is the one who decides where to go and set up, based on the mission and the overall plan. The spotter sticks with the sniper for protection, and to take his place if he is injured or killed. While the sniper sets up and takes out the assigned targets, the spotter should be watching the rear and flanks so the team doesn’t get surprised and shot execution style.