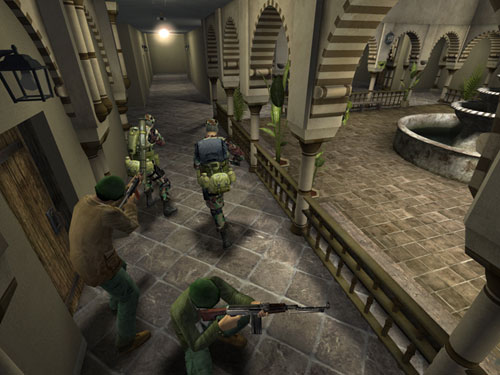 Moving as a Team

When you move as a team there are a number of formations to use in land combat. The decision is dependent on the likelihood of enemy contact, and the type of terrain the team or squad will be moving over or through. You can move in file formation when enemy contact is less likely and the terrain is difficult. When you follow in this single file line formation, maintain some distance in case of booby traps or a surprise grenade attack.

A line formation is when the team or squad moves up in a single line – say a ridge line to engage an enemy on the other side. It is effective when you’re moving up to engage an enemy or to concentrate maximum firepower on a target. You’re arm and arm next to each other; it’s like a wall of soldiers advancing.

The wedge formation is the best formation when moving from point A to point B as a team or squad. If you’re a squad then there will be at least two teams, (two wedges). A wedge will have a point man positioned ahead at the tip of the wedge; the team moves at his pace. If he stops then the team stops. If he approaches a danger zone or an enemy that hasn’t seen the team, he would report back and the team leader (usually in the middle of the wedge to direct his soldiers) would issue the orders to either engage or go around the danger area.

You can easily start in a wedge formation, come up to an enemy patrol or post, and then move up to line formation to begin the engagement.

When you come across a danger area like a open field or courtyard to cross, your team or squad would stop. You should set your two outside soldiers to watch the flanks, after popping smoke if needed, (remember smoke may give your position away) your soldiers will run across the danger zone and set up on the other side. Once all have crossed then you can continue on in the normal fashion.

When you’re moving up on an objective or getting closer to an enemy for engagement and not out in the open, you should always follow the 3 to 5 second rule. Run from cover to cover for only 3 to 5 seconds. If you stay exposed any longer than, an enemy can sight and shoot you easier.

The first land maneuver that I want to explain has been around since the beginning of warfare. It was one of the first team movements learned in mass warfare. In the flanking maneuver a unit or part of a unit swings around to the left or right side of an enemy to engage.

I’ll try to explain it in story form: Your squad is moving through a lightly wooded area in a duel wedge formation. Suddenly you come under enemy fire from the front. The front wedge, Alpha team immediately drops to cover, and positions themselves in a line formation facing the enemy. Alpha team then opens up to engage and lays suppressive fire. While the enemy is suppressed the rear wedge, Bravo team, splits left or right on the direction of either the squad leader or the team leadert. Bravo team tactically runs left or right a good safe distance, then moves up parallel to the enemy line of fire and come in on the flank in a line formation. If it goes as planned, the suppression team is keeping the enemy pinned, creating a nice flank by the second team. Communication is key for timing and signaling the suppression team to shift fire away from the flanking side. The flanking team comes in and kills the enemy.

For example: two teams are part of a squad. The squad needs to move from point A to point B. Team Alpha gets into a nice safe position to cover team Bravo’s movement. Team bravo moves to a safe covering place, gets into position and team Alpha moves out to bound over the other team. This goes back and forth till the objective is reached.

Cover is something you can hide behind that a round can’t penetrate like a wall. You are better protected behind cover than hidden (concealed) in the tall grass or behind a bush from observation by the enemy. If you’re spotted while concealed, you are still susceptible to enemy gunfire.