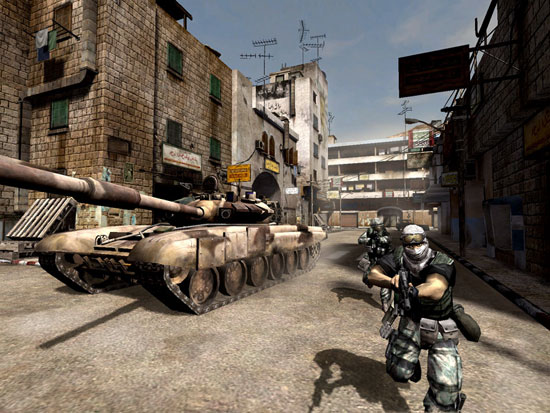 In my opinion, the sole purpose of single player in Battlefield 2 is to practice and learn before making a fool out of yourself on a multiplayer server. In single player you can pick 10 different maps. AI teammates and AI enemies will then be spawned to conduct your warfare with and against. You can still take over the squad leader and commander roles in single player to practice those modes. The AI is better than in the past Battlefield series but still predictable and pretty much idiotic.

What I don’t like about single player mode is that you can’t fly helicopters or fast movers. I don’t understand why that wasn’t allowed in single player. Maybe because flying is too advanced for the AI? TIP: If you want to practice flying, you can start your own LAN server, join it and practice all you want with the different aircraft. You won’t have anyone to battle with, but you’ll manage some “seat time” in the air.

You can use your flight sticks or HOTAS in Battlefield 2. I have programmed the helicopter and fast movers with my Saitek X52 axes, and they work well. Not simulation well, but well enough to do a little flying. Because the maps are small when going high speed over them, you still have to use care that you don’t end up off the map as was the case in BF42 and BFV.

Multiplayer, again like it’s predecessors, is the heart and soul of Battlefield 2. Once you click on “Multiplayer”, the list of servers appears. The in game browser gives you the name of the server, the map, the number of players, whether it’s password protected, whether it’s a ranked server, and the average ping. Click on one and join. Thankfully, you can also join by IP if you’re looking for a specific server.

There are 12 different maps in three different sizes, giving you an option of 36 different maps. The size of the maps are determined by the number of players: 16, 32, or 64. Multiplayer can range from boring to exciting. I have joined a couple of servers to find no teamwork whatsoever and people simply running around doing their own thing. I would call for assistance but no help would ever come. I would spawn in and see a transport truck rolling out of the gate, then run to join up only to be left behind. On the other hand, I have been on servers that require you to join a squad and listen to squad leaders directives otherwise you would be booted and banned from the server. These people understand the concept of the game, and the teamwork and soldier roles among the gamers on these servers truly enjoyed the game. So what am I saying here? Basically whether you enjoy the game or not all depends on what you want from this multiplayer game, who you play with, and what type of teamwork cooperation you find.

I like run and gun computer games — they have their place. Personally I prefer more squad orientated games like America’s Army and SWAT 4. I have to admit to being very surprised to find that with the in-game voice communications, squad leader roles, and commander roles, I’ve used more teamwork in Battlefield 2 than in any other game, even my beloved America’s Army.

When you join a squad, all your squad members are then shown on the map in green, and the labels over the head are green. It makes them easy to locate. With the built-in comms and a headset with microphone, you can talk with your squad by holding the “B” key down. Only your squad can hear you, so there is no confusion on who is saying what. The squad leader can talk with the commander by holding down the “V” key. Only squad leaders can talk to commanders so the chain of command is really modeled well here. The commander talks to the squad leaders, giving them orders, while the squad leader talks to the squad in a plan to carry out the assigned mission. It is just so cool for your squad to be moving to an objective, and see another squad moving either to their own goal or too assist you, knowing that there’s a “big picture” to this battle and that other squad is following the orders of their squad leader — just like you are.