How the game works

War in the Pacific is a turn based strategy game that simulates the entire conflict in the Pacific Theatre during the Second World War. This is wargaming at its oldest and most original, the hex based wargame. These games have their roots in the old board games like Squad Leader and Pacific War. In fact, WitP is essentially a modern interpretation of Gary’s original Pacific War which came out over 10 years ago. This is considered a classic of wargaming from the glory days of computer wargaming. Back then games like Steel Panthers, Achtung Tiger and Pacific War sold copies by the thousands.

So to play the game you choose a side, order your ships/troops/aircraft to do this or that, and then run the game through a turn cycle. In essence you stop the game every day (if you want) to recheck and give new orders. If things happen (like your warships encountering an enemy task force) then during the action phase you get to see what gets shot up. I am simplifying the entire thing for brevity’s sake but in essence you prepare, and then execute. The results of your actions are based upon how well your troops are trained, the ability of the enemy forces against you, and the odds of your completing what you want to do. As I said, this is simplifying but in essence this is how the game works. 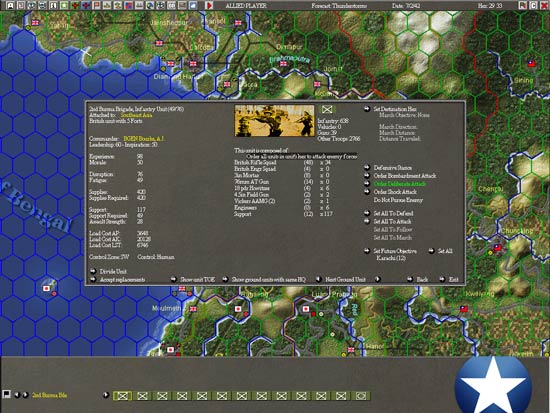 This is a tried and true method of resolving conflicts in wargames. In the old days you would have a table and a pair of dice that would resolve the actions. Today the computer does that part for you. What is nice is that the computer resolves things much more quickly (and much more impartially) than the old roll the dice and see what happens method. The bad thing is you sometimes get results based upon odds that seem to not correspond with reality.

WitP has three major components; air, naval and land combat. Each method is resolved in separate ways and each has it’s strengths and weaknesses. More on that later. The goal of course is to wipe the enemy forces off the map, or to at least force them to say ‘uncle’. Just like in the real war, the goal of the Japanese Forces is to take over as much territory as possible early on and then hold out in the hopes that the Allies will tire of the conflict and sue for peace. The goal of the Allies is to withstand the hammer blows of the Japanese forces and keep as much territory as possible while readying themselves for the counter attacks that will drive the Japanese forces back to the home islands.

War in the Pacific Page 7