The most interesting part of the game is the Grand Campaign. You can literally set the game up so that the US is aware and prepared for the Pearl Harbor attack. You can get your ships out of port and even try to stage an ambush of the Imperial Fleet with your battlewagons. Of course everyone tries this but most will find that the night fighting ability of the US fleet is so bad that even if it finds the Japanese main body it can’t hit anything. The game can also vary the possibility of finding a US carrier or two either in port or close by Pearl, setting up a more decisive battle earlier in the conflict. The main goal of the Japanese, of course, was to take out the carrier strike force in Hawaii and if they had taken out the Yorktown and Lexington in the first few hours of the war, the outcome might have been completely different. Of course these two ships were on transport duty to Wake and Midway so they missed out on the attack but that was more due to luck than anything else. 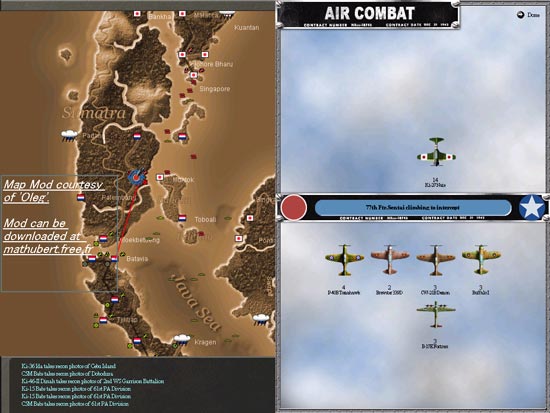 Overall the game is somewhat scalable to make things slightly easier for the gamer. You can assign zones of control to the AI, making it easier for you to concentrate on one theatre or another. You have to be careful with this; the AI can get you in trouble. Just like real life, your AI commanders don’t always make the decisions you like and if you don’t pay attention, you can get in a lot of trouble. You have the option to assign resupply convoys, subs and upgrades to occur automatically or you can pick and choose where to go and what to update.

So the game is scalable to make things a little bit easier for the player but by no means is this a game for the beginner wargamer. The scope of the game is huge and the knowledge you have to have to be successful is amazing. As complicated as Uncommon Valor is, War in the Pacific is doubly so. The manual that comes with the game (in PDF format) is full and concise and in general will tell you what you need to know to be competent, if not successful, in the game. I highly suggest that it be printed out and read thoroughly if you want to play the game. I suggest this even to Uncommon Valor vets who think they know the system well. Trust me; there are a lot of things added to WitP that were never in Uncommon Valor.

Graphics, what graphics? If you went out and bought a new GF 6800GT for this game then you wasted about 400 bucks. This is a game that would look just as good on a 4 meg 2D only video card as it would on one of the 256 meg super jobs that every flight sim nerd seems to want these days.

Graphically this game looks and feels dated. This may seem like a gripe but in all honesty slick graphics would probably take away from the feel for the game. This is a game that went deep into the dugout for gameplay and felt the looks department was something that really wasn’t that important. Basically this means that all that fancy stuff that you see in many new games, even wargames, aren’t seen here.

You can see the lineage of Battle of Britain and Bombing the Reich in this game. In fact, in one of the more interesting bugs I have found in the game, I played BTR for an hour and then fired up WitP only to find that all the icons seen in WitP had been replaced with all the icon figures used in BTR. A reboot fixed this but I was quite surprised to see such a thing. There has to be some shared code between the two games.

Graphics are 2D and generally vanilla. Aircraft and ships are rendered in 2D drawings and damage done is not actually shown specifically. Instead you get a damaged or on fire sprite that goes over your ship that shows it is damaged. Again, I don’t expect top of the line graphics from the game. Fancy 3d graphics in this game would be about as useless here as it would be in solitaire. If you like fancy little graphic crap then this is not the game for you.