As most of the readers here know I love the SWAT series of computer games. I still have SWAT 2 and SWAT 3 installed on my computer but admit I rarely play them now. I do play, almost daily, the latest release in the series, SWAT 4.

SWAT 4 in my opinion is the best in the series and probably the most realistic, squad tactical shooter released in the last couple of years. Sure it has a couple of minor problems, mainly the AI in your fellow SWAT officers, and the unrealistic use of force policies, but overall it’s a great game.

Those of you that know me, or have read either the SimHQ Preview or Review for SWAT 4 know that I gave this game extremely high marks, especially on the surroundings and environment. If you go back and look at the screenshots in the beta preview article I did, and then in the screenshots in the review of the game, you’ll notice a key difference in those shots compared to the ones on the next page.

You see, either the developer or publisher (I haven’t found out who made this ridiculous decision yet), decided to add a small, hidden application within SWAT 4 that is installed with the latest patch. This program activates “dynamic ad support”. What is dynamic ad support? Well it took a few days to find out because neither Sierra nor Irrational Games was saying. Dynamic ad support downloads different “real world” ads every time you connect and play on a multiplayer server, and then those ads appear in-game. Reportedly on different SWAT 4 related forums, this application also records how long you look at an ad, at what angle, and then sends that information back to someone, No one knows who, well except for maybe Sierra or Irrational Games, but they’re not saying.

At first when I heard about this, I didn’t really take any offense to it. I didn’t think it was a big deal. So what? Their adding real world things like maybe a soft drink bottle or something similar in the game will make it more realistic. That’s cool. 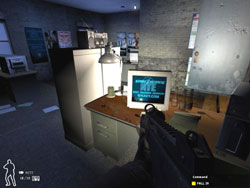 But then I joined my gaming groups SWAT 4 server, and to my surprise — and complete disgust — I started seeing all these posters on all sorts of walls. Even walls that no one would ever really put a poster on. Or in locations like a closet or storage room. I’m not talking one or two posters per level… I’m talking 3 to 5 posters per room, per level. By adding all these poster ads the great environment and atmosphere I bragged so much about in my previous articles has been ruined.

In my opinion, Sierra or Irrational Games stepped not only over the line, but into the next room with this ridiculous and unnecessary hidden ad function. What has me more upset about it is the fact that they conveniently left this hidden application out of the release version. Then incorporated it into the one and only patch they released for the game to date. To throw more fuel on the fire, they didn’t even give us, the consumer of their product, an option to turn off these ridiculous ads.

You can tell by the screenshots on the next page how this hidden ad program has ruined an otherwise great game. There is a way around it. Whoever hosts the game server needs to have some command lines in the system folder. But should we consumers, who paid the average full price for SWAT 4 have to do this? No, it should be a menu option. It should be allowed — and easy — to deactivate the ads.

So what can we do about this? Many people have posted their opposition to this hidden function in the popularSWAT 4 forums. But all either Sierra or Irrational Games has said so far is that the application will stay. We could all agree not to buy the add-on coming out in 2006, but I know I don’t have the discipline for that (and I’m sure Sierra or Irrational Games is counting on that). When the SWAT 4 add-on comes out next year, I know where I’ll be at 10:05 AM on release day.

I still love SWAT 4 — especially since I’ve found a way to block those ads. But I don’t like the direction this is taking, and now I expect to see this kind of crap to start popping up in other games.

I just can’t help but wonder what the companies pay for those advertisement endorsements in our games? Who gets the profits, and what will the price be for the add-on? In my opinion, if you’re going to force us to see your advertisements, while you make a profit on it, a little of that should be shared with the consumer base, like a reduced price for the add-on. But frankly, I would prefer to pay more for a version without the ads.