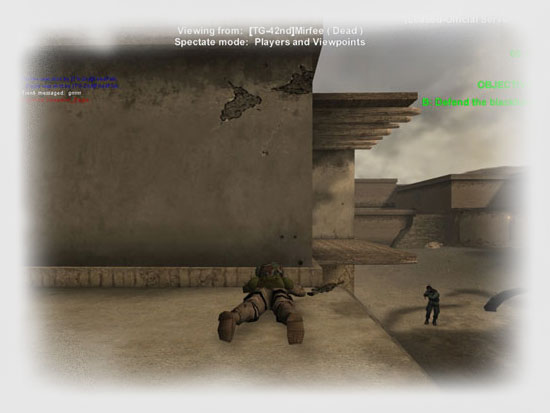 Another thing about America’s Army. You are always the good guy(s), no matter what side you are on. And youalways see the enemy as, well… the enemy.

Later in the game more training opens up and with success come more weapons. First is the sniper qualifications. That is hard to get. It’s followed by airborne training, with airborne missions opening up for you. Then the medic training, which gives you the chance to select playing a medic in game, and getting points for “healing” fellow soldiers. Finally comes the Special Forces training. After completing the training — including a difficult and time-consuming escape and evasion test — Special Forces positions make available new maps. Of course you also have to be an honor 15 (or above) to be SF. As an SF soldier you could customize your own weapon (SOPMOD M4 Carbine) with a lot of real world extras like special sights, attachments and silencers.

The game HUD is laid out well with all the information you need. You have a compass up top which shows direction, objective waypoints, leaders, and location of the medics. On the top right it tells you your current location on the map, and what your rank is and what fire team you’re assigned to. The objectives are just below. And your weapon, ammo count, and grenade count is displayed at the bottom of the screen.

A hidden treasure in the game, that most players are aware of but many new players don’t know about, is the communications menu. You can set key binds for radio traffic, whisper, yell, and hand signals. Then when needed you hit your commo key and send out commands like “cover me”, “enemy spotted”, “enemy down”, and many more. Of course if you’re playing with a clan or gaming group then a communications program likeTeamspeak is better then fumbling with the comms keystrokes. The communications menu is a nice feature — if you can’t or won’t use team speak.

So, the squad leader will usually develop the plan and order the fire teams to implement it. It could be something like “Alpha team, move to objective B towards the North, Bravo team, move East then North to flank the objective, Charlie team (the sniper team or support team), go high ground for cover”.

The fire teams move out towards their objectives with the fire team leaders reporting status and contacts. If one team makes contact or gets ambushed on the way to the objective, the squad leader should adapt and overcome, by changing fire team orders. The possibilities of real world small team tactics are unlimited. If you find the right group to play with, then practice and learn, you’ll end up loving this game.

When you’re a member of a fire team, you play the role you’re assigned. You could be the team leader or a M249 SAW gunner. You could be a grenadier with your M203 (40mm grenades) or a simple but valuable rifleman. Each weapon fires and handles differently and proper reloading procedures including weapon jams are modeled. So, if you’re assigned to suppress an enemy location or choke point, then you need to know how to handle the M249 SAW machine gun for proper suppressive fire (3 to 5 second bursts) if you’re assigned to suppress or clear windows, you need to know how to fire the M203 grenade through the window. The rifleman is usually supporting or watching the flanks of the specialty with his trusting M16A2.

You also get a number of military toys to deploy. You have the typical fragmentation grenade which has a 5 second throw fuse. You can cook it off for a really good timed kill but be careful. If you get shot and drop it at your feet, you may just take out your whole team. You also have smoke to conceal your movements and flash bangs which come in handy when trying to clear out rooms. You also have explosive cord for blowing in doors. The explosive cord was introduced just a couple of updates ago.