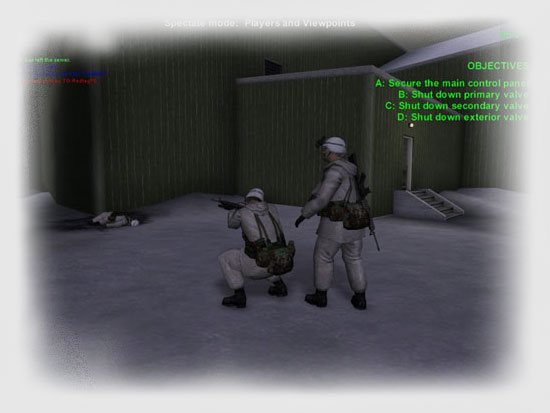 America’s Army simulates a small squad in today’s type of small unit warfare. The missions vary in many ways with many objectives. In some you simply have to make it from point A to point B, while others you have to infiltrate a compound to retrieve data from a computer. Or rescue a POW. In later missions you have multiple objectives. For example, one of them being to make contact with an informant, then your objective changes to locating a briefcase, then finally culminates in getting away to a certain point with the brief case. All along, the other team is usually tasked to stop you, or protect the vital information. There are so many missions and maps that you can’t get bored with this game once you’re into it. Updates arrive about every six months.

The downside of America’s Army really isn’t the fault of the game, but more the fault of human behavior. As I mentioned earlier, since there’s no AI characters and everyone you work with or do battle with is a human, humans can ruin this game more than bugs or in game problems. Sure, the programmers need to find a way to stop some of these exploits, but humans will always find a way to cheat the system and ruin the game play. America’s Army is protected by Punkbuster technology. It works well, but humans are always one step ahead so Punkbuster needs updating almost every few days of play. Like I said, you have the “Rambo” type of player that is just so good that he doesn’t want to work as a team player, or go for an objective. He wants to virtually hunt — then kill — the enemy. Then you have gamers who know the map too well. They know the spawn points of the enemy and they enter the game by throwing fragmentation grenades or shooting M203 rounds to the known enemy spawn points (or the known choke areas).

The newer maps/missions have addressed this problem somewhat by adding random spawn points. But sometimes the spawn points are so randomly close to each other that an engagement begins within 10 seconds of the game’s start. That does not give a team the time to develop or start a tactical plan. I would love to see more open, larger maps, with many avenues of approach to an objective. This would give the assault team more options for proper military tactics, and force the defense team to actually defend the objective instead of going out on there hunt. Remember, on most missions you’re not supposed to know what direction the enemy is coming from — but you do — and naturally you play to that advantage.

I also have a problem with the suppressive fire. The game supposedly models that if you’ve taken fire near your location. Your ability to stabilize and return fire is reduced. However, many times I will see an enemy in the open and will engage with suppressive fire with my M249 SAW. I watch them stop, turn, and shoot me dead. Suppressive fire needs to be addressed a little more in the next major update or upgrade.

Two new features in the latest version are long overdue. A server administrator can make certain players “player admins”. These guys can bring up the server information and settings with the “F12” key. They can then change the rules, server settings, kick or ban players. They can also change the maps and number of games in a round. They can instant message other players in the game. I use this to tell the “Rambos” to play the game as a team — or leave. They usually comply… or they get booted off the server. It’s a fantastic tool as long as it’s not abused by the player or admin(s).

The second feature is the new tournament mode. You put the server in tournament mode using the “F12” key, then select your maps and number of games per round. Then two clans or gaming groups can join each side with there own password. The game starts with a 60 second “free tour” of the map, so your team can do it’s planning, again usually over Teamspeak comms. Once the free tour is over, the match starts. It changes sides automatically, and then outputs a log of the tournament results. An incredible tool for clans and competing groups.