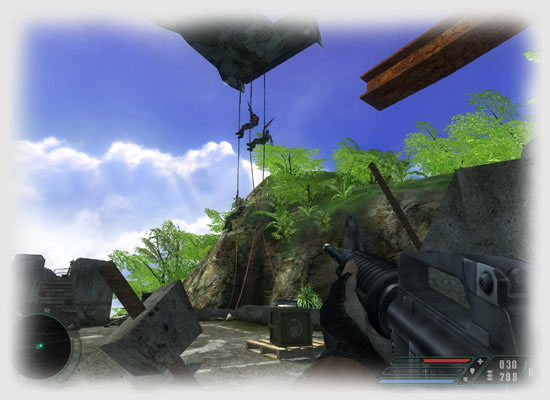 You are stranded and without weapons, so it’s time to find some. As in most first person shooters there is a quick training mission presented on how the game works. Mostly just jump or crawl under a few obstacles and then you are contacted by a mysterious person named Doyle, he knows a lot of things about what’s going on and he will give you your mission objectives and valuable information through out the game. The story is not the best one ever conceived; an evil scientist, Krieger, is doing some controversial genetics research on primates, and even humans, and then (of course) something happens and these mutated beings are set free and runs around the islands creating havoc. In the middle of this we have the mercenaries on the island providing security led by an American soldier of fortune, Richard Crow. It’s set for some intense action in your effort to save you, the lost journalist and Doyle from the mercs and the mutants. Usually the story is driven with cinematic sequences, and some are rendered nicely with the engine, while some are not. There’s a noticeable quality difference, but mostly it will be from the first person perspective.

The campaign covers twenty levels on several islands, mostly outdoors but you will be fighting indoors as well (bunkers, caves, research areas and so forth). The game is open-ended, there’s not just one way to accomplish a goal, there are usually tons of different ways of doing it with multiple routes. You can sneak past entire groups of enemies using the environment to your advantage or you can take them on. There can be a lot of frustrating moments if you walk into a trap, which usually aren’t necessarily programmed. You might have been unlucky and taken on an area with bad guys from the wrong direction, or maybe you were not careful enough. You will have the ability to enjoy the game over and over again, the game has a lot of replay value.

To your disposal you have a set of binoculars with 24x zoom with a built in motion tracker that allows you to find — and with the radar/compass — also track enemies. It also comes with a mike so you can hear noise and conversations at a great distance. You will also get a flashlight attached to your clothing and a set of “CryVision” goggles with a special viewing mode. They’re a cross between low light and termographic imaging (similar to the vision modes in the Splinter Cell games). On the radar, all known enemies will have several color codes. At green the enemies have not spotted you and you are safe, at orange (or yellow) they are suspicious and at red they’re aware of you. Mission objectives are shown in blue. You will have a “stealth-meter” that will show if the enemy has spotted you or not. It’s safest to use the binoculars to spot the enemy from a distance so you know where they are and then plan your route.

Of course, what is a first person shooter without an arsenal of weapons? There are eleven of them in the game; a machete, a Desert Eagle (called Falcon 357 in the game), a P90, an MP5 with a silencer (although with different ammunition in real life, the two SMG’s share ammunition in game), an M4, a G36 with scope and a grenade launcher (called AG36), a OICW which also comes with scope and grenade launcher, a semi-automatic shotgun, a sniper rifle, an M249 and finally an rocket launcher. Hand grenades, flash bangs and smoke grenades are also available. There are also mounted weapons, a mortar and a mini-gun. Oh, you will also have an infinite supply of rocks which you can throw to confuse the enemy.

Because of the great distances on the islands there will also be vehicles available and most of them have mini-guns and rocket launchers mounted. A beach buggy with a mini-gun, a HUMVEE with both a mini-gun and a rocket launcher, and a big slow (unarmed) utility truck. By sea you will have an unarmed inflatable boat and a patrol boat with the same armament as the HUMVEE. You can also fly around on a hang glider and drive a forklift. The enemy will use these vehicles as well as an MV-22 Osprey (for insertion of troops) and a Blackhawk gunship. These two can’t be used by the player. The third-person view — which can be enabled when driving a vehicle — is cumbersome. The hang glider is very cumbersome to fly. It’s heavy, and strange to fly. In comparison, the vehicles in UT2004, or the Battlefield series, are much better.