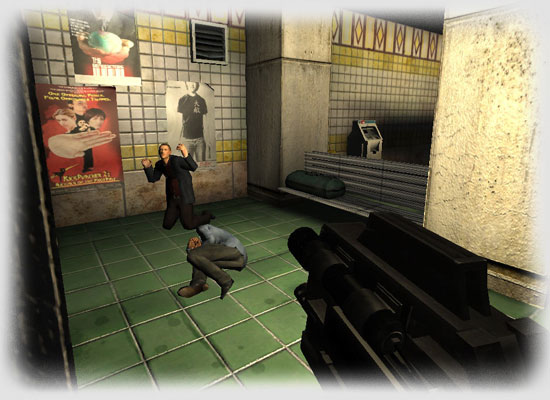 Last year Sierra/Vivendi Universal released SWAT 4, the much anticipated follow up to the much loved and respected SWAT 3. I did a preview and a review of SWAT 4 and gave it very high marks in almost every category. There were only a few minor complaints I had about the game. In my opinion SWAT 4 is one of the greatest, most realistic, and most tactical computer games I have ever played.

I was happy to hear about the expansion pack, and now it has been released and I’ve spent more then two weeks playing every aspect of the game. I’ve completed the single player campaign twice, and experimented and tested all the different multiplayer modes, but most of all I have played a lot of cooperative play, mostly with dedicated SimHQ members as my partners. 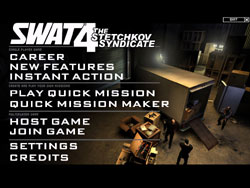 “Your team’s got powerful new weapons and equipment. You’re gonna need them. The Stetchkov Syndicate is putting big guns in the wrong hands. But now you’ve got bigger guns in yours — along with upgraded equipment. Real-time voice communication tightens coordination in multiplayer. Co-op multiplayer teams can now be up to 10-players. Whether you’re online or on your own in single-player, you must employ all the SWAT® tactics you know to bring down this deadly new menace.”

What that means is that they tried to incorporate a story into the add-on, kind of like they did for SWAT 3. I for one understand the purpose or idea, but disagree from a SWAT tactical stand point. SWAT responds to calls when the road patrol police get into deep water. They respond to barricaded subjects; they respond to snipers, they respond to hostage takings, and many other high threat situations. But rarely are these crimes connected, sure there might be the same bad guy involved in two or more situations, but the chance of a “crime syndicate” where SWAT needs to constantly respond is unlikely.

That being said, luckily the story doesn’t interfere with the game play, and if you don’t read the briefing, you would really never know of the “story”.

You get a whopping 7 new maps/missions with the add-on, and yes, I’m being sarcastic. This to me is a big disappointment. Why? Because SWAT responds to calls, and though the tactics and procedures are usually the same, the locations rarely are. For a proper add-on, I would have said no less then 20 new maps/missions — my opinion.

Heck, the H.S.M.E. v2.0 map pack contained more then double the number of maps then this official add-on, and all very well done I might add.