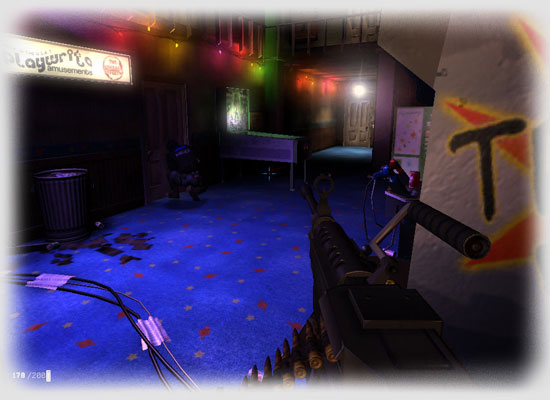 The SWAT 4 add-on brought a lot of what gamers were asking for, some at the cost of realism. I thank the developers for this add-on because it is well worth the 20 bucks, but I can’t help thinking that there are at least three modifications for SWAT 4 out in cyber space that give just as much, if not more then this official add-on.

This add-on appears to be geared for the multiplayer community. Sure it has a 7 mission single player campaign, and a few extra command and control features but most of the add-on is for multiplayer.

The missions are harder, the bad guys badder, and the maps bigger but I noticed the AI seemed to get a little dumber. I don’t claim that the developers dumbed down the AI, but I don’t think the default AI is up to task on the newer hard maps. More then once a team would call a room clear, I would walk in and a bad guy would pop out behind a door, not clear. More then once I would witness a bad guy pointing an AK47 in an AI officer’s face; meanwhile the AI officer is ordering him to drop the weapon, nope… Trigger pulled, officer down. The use of force policy is still ridiculous and unreasonable. Understand that the idiot AI isn’t that bad, it’s not perfect but at least it isn’t the same AI as showcased in Lockdown. SWAT 4 is still playable, Lockdown, due to the AI, is not.

The new multiplayer mode is fun, but where SWAT 4 still shines is in the online cooperative mode. The number of officers has been bumped up from 5 to 10, and you will need that many with the new, larger maps. The new voting and command features are great and a real welcome. The new weapons are good for your other game modes but co-op really doesn’t benefit from too many of the new weapons and toys. The light sticks are nice, but with the new SWAT 4 bad guy AI, they get up and move, flee, or hide in other rooms so they really have no use except to remind the player where he’s been.

I tested the VOIP feature included in the add-on and to me it seemed a little too low in volume compared to the rest of the game. I still stick with team speak, but am glad they added it in anyway for those who want it.

I was disappointed to see they didn’t get the picture about in-game ads, they’re still there on multiplayer servers, (and can still be blocked.) But look on the bright side, at least there’s no StarForce.