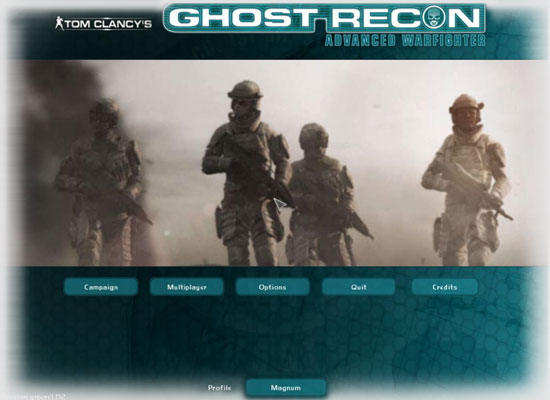 You get a lot of fun stuff with GRAW. You have primary assault rifles which have been updated with the latest look, pretty much like G36s and other advanced models. You get the advanced SAW type machine gun and a couple of advanced sniper rifles. Essentially the basic squad weapons made to look — you guessed it —advanced.

One really nice feature is that you can go into the inventory screen and select different weapons for yourself and your team. You can pick different grips, silencers, and aim sights. So weapon customizing is there, to some extent. You can also get fragmentation grenades, but oddly no flash bangs or smoke grenades. When you’re fighting in a huge city like Mexico City, you could be doing some house-to-house fighting and a few flash bangs would come in handy. I can forgive omitting the flash bangs, but I cannot forgive the inability to utilize smoke. Heck you even see them using smoke in the splash screen introduction, yet you can’t get it in inventory. So many times I wished I had smoke to conceal my squad’s movements in an open and deadly area. But nope… no smoke.

It’s the future, so you have new state of the art uniforms, and some incredible ballistic protection gear. At first when I saw a team mate take a round or two in the body right next to me, then fall down only to get up again, I thought “What’s with this arcade crap?”. Then realized it was because the body armor is made to take the blunt of the hit. It’s realistic that you would fall down, but then be able to shake it off and get back into the fight. (If you watch the bonus DVD I mentioned, you will see this is a “real” feature.) 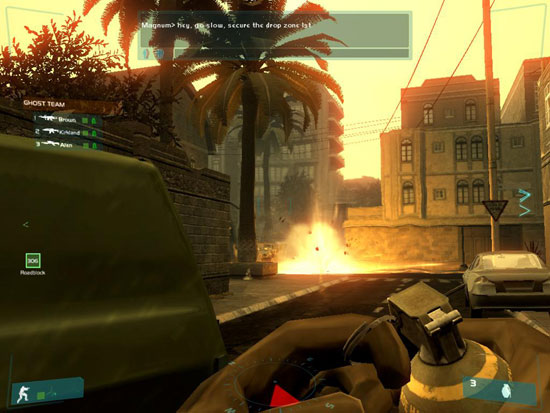 You start off with a new campaign in GRAW. Your first mission is the in game tutorial. In this first campaign, you find yourself in an airplane. The ramp lowers, and you and your squad of four are out the door.

Let me comment on the squad for a second. I cannot believe that in the future a military squad is downsized to just four soldiers. There should be a proper squad of 12, and then you control the teams of 4 each. The teams would work together for the good of the squad. In the game, if you want to flank a group of bad guys, you would usually lay suppressive fire with your gunner, and send one or two of your team mates around for the flank. A squad of four is too small, and because of this, a lot would die. In my opinion, a proper 12 man squad would have been more realistic and better for proper tactics in this game.

Okay, back to topic. You then find yourself doing a HALO drop during the day into an enemy held city, not realistic, but it was fun and a great add. Of course, as luck would have it you are separated from your team. A guy pops up in your Nar-Com, which is a small window in the top right of your screen (it’s the future remember) giving you live video feed while out in combat, and he instructs you on how to move and check your equipment. Once you get that part down, you’re sent to find your men. You meet up with them one-by-one till you have your team of four. Now the tutorial is over and the war is on. It’s a pleasant, easy tutorial so no complaints from me.

You then begin receiving your mission orders through your Nar-Com. You carry out your orders the best you can. Once you do something semi-important, the game Auto Saves for you. If you die as the leader, the game is over and you’re forced to reload your last Save. This is fine unless you have spent almost an hour on tactics and stuff with your team, only to take a bullet right before mission complete. You then have to Load from the last Save and do it all again. This would be OK once or twice, but I’ve found myself reloading and doing things over and over again about 10 times per mission. It gets old quick.

The single player is fun and very addictive. I really enjoyed playing it even with a few problems — mostly with the artificial intelligence (AI), isn’t that always the case.

On some of the missions you have a nice drone that flies overhead, giving you a bird’s eye view of the battlefield. Hit the “G” key to bring up the big picture. You also have other support elements in different missions like armor tanks, Apache helicopters, and artillery. As a matter of fact most of the missions revolve around getting to a position and calling in one of these support vehicles for the final assault, and then getting out.

This is a first person shooter, and so you will spend most of your time moving from cover-to-cover, while you engage the enemy. But there is also a very nice tactical game within the game. You bring up this very nicely done 3D tactical map that shows your men, any enemies that are seen by your friendly units and the objectives of the mission. You can then order your team individually to move to locations, cover a spot, or engage a target. It’s really fun to sit back and issue your members short, bounding over watch movements through a certain map. You’ll see the firefights on the map, and can order another member to flank and attack. The makers did a very nice job with the tactical map. I found that your AI team mates work smarter and better via the tactical map. When using the in game middle mouse command, they never seem to go where you order them. 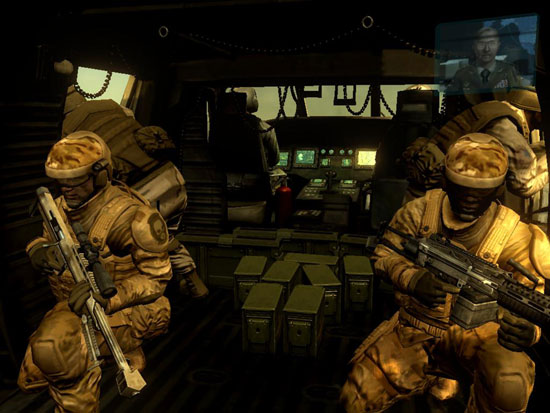 There are only two modes of multiplayer that ship with the retail version of GRAW. One is the much loved and anticipated Cooperative Mode, where you and up two 3 friends can get online together either via LAN or through GameSpy and do any of the single player campaign missions. The other is Domination Mode, which is a “join in” anytime type game with the purpose of force-on-force capturing and holding control zones.

There are a number of reported problems with multiplayer. The first is you have to sign up with a new GameSpy account, and half the time you can’t connect. Some report that they’re getting CD usage errors, while some report that there is a memory leak that ruins the game before long. In Cooperative Mode, if the leader dies the game ends, and most of the time I get disconnected, and have to reconnect again to start over. I’m sorry, but the Ghost Recon series has been famous for it’s online games and cooperative play, the multiplayer, as is, is a joke. Grin/Ubisoft have thrown another potential for a classic away with their decisions. Multiplayer is fun as hell — when you can play — and as long as the leader stays out of the fight. Unless the multiplayer is fixed, this game will fade away quickly. Did members of the development team ever play the original Ghost Recon? Not from what I can tell. It’s a shame.

Update: One day after writing the multiplayer part of this review, Grin release a patch that addressed most of the technological aspects of multiplayer, but no game play corrections or add-ins yet. That is a good sign to me. It shows that Grin/Ubisoft just may be willing to support and bring GRAW to where it should be. I do know that they said in public forums that a patch would be released in June, fixing and adding a lot of multiplayer stuff demanded by the GR community. A “stability” patch is reportedly due in the next few days.