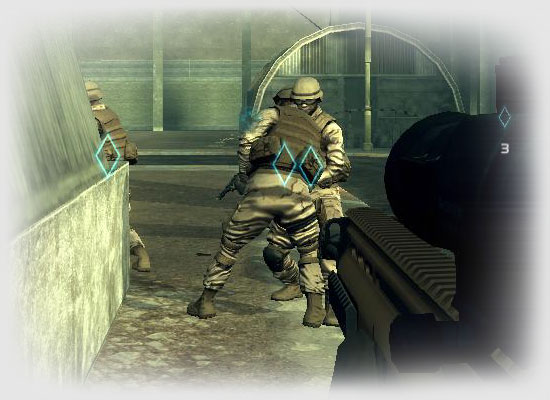 Right up front, GRAW artificial intelligence is not nearly as bad as that other game that I don’t want to mention anymore — but there are still some issues. Not game killing issues, well really, sometimes they are…

The enemy AI doesn’t bob up and down like we’ve seen in other games, but it’s still not human like. They do a good job of spotting you then firing, and if you spot and fire on them first they will take cover, sometimes diving or sliding for cover. The enemy AI seems questionable, sometimes it’s a slaughter where you and your men can easily dispose of a couple of dozen bad guys, then other times there will be one or two super bad guys that will keep you pinned down or pick off you or your team. Especially the snipers that you don’t always see till it’s to late. I have seen incidences where the enemy AI would attempt to suppress and flank you, but this seems to be more dependent on how that part of the map has been programmed. It’s doesn’t appear to be random. The enemy AI is definitely doable, but still a long way off from realism. Sometimes they stand there and do nothing, other times you wonder how they spotted you low crawling in the dark, in the dark shadows of a building.

Now your teams AI are a little more sub-par then the enemy AI. They do the job but more then once they get themselves or you easily killed by not watching their assigned area. You have the option of using your mouse and clicking on the virtual world where you want either your team or an individual member to go. They rarely go where you want. If you click at the corner of a building, they will go too far out into enemy fire. Not all the time, but at least half of the time. If you send them to a point on the virtual world, say behind a car facing enemies, they may or may not go behind the car, and they may or may not face in the direction of the enemy. 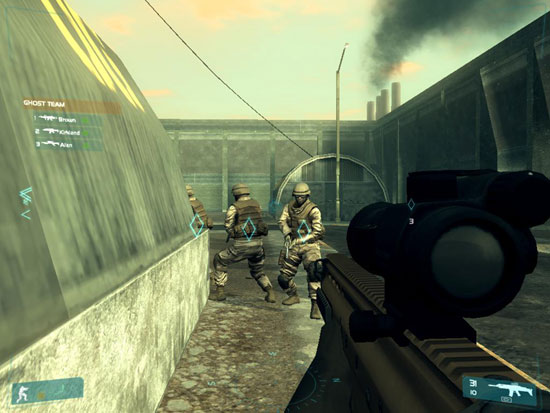 Now if you use the tactical map they seem to do a lot better, but again, not always. I’ve ordered a soldier to follow a small number of waypoints, not too far or long, but down the side of a building, then maybe across a danger zone, then behind cover like a rock or a car. When using the tactical map, most of the time they follow. But there have been times — for no reason — they would take the long way around to get to a spot, and sometimes walk right into enemy fire. I found that if you use the tactical map by issuing each member a certain order, baby steps at a time they will follow military protocol a little better, but if you try and make them move too far or around too many objects they will get lost, stuck, or killed.

Use the tactical map and one soldier at a time, send one up around a building, and then issue the next to bound then over watch. It can take a long time to accomplish the mission this way but it’s the safest for the AI.

I also noticed that the friendly AI doesn’t see too good either. I have issued an order for the sniper to move to a location over watching a hostile area; he would get there and do nothing. Even with a fire command. I would use the Cross-Comm screen, to see what the sniper sees, and sure enough he’s staring right at a bad guy. I would then yell at my screen “Shoot the MF already, dammit!” This is really when you realize that the developers should have allowed the player to jump into any ghost to take that all important shot — just like the original Ghost Recon. But they didn’t and that’s a major bad decision in my book. That one feature could solve most of my reloads of the last save.

You know what else I noticed? The friendly AI never goes prone. I have never seen them go prone, not even the sniper who should always try and fire in the prone. I have never seen them throw grenades either. I don’t know if they have the capability. I’ve played through the whole campaign and have never seen it. I’ve also noticed that the Ghost carrying the AT4 never uses the damn thing. When I have the mission to take out the enemy armor blocking our exit, I have to go to the top, meet the Blackhawk, get an AT4 and take out the tank myself. Why doesn’t the guy with the AT4 do that?

What I’m saying here is that the game is definitely playable. More playable than that other one, but for a bunch of highly trained, special forces soldiers, they’re pretty stupid. 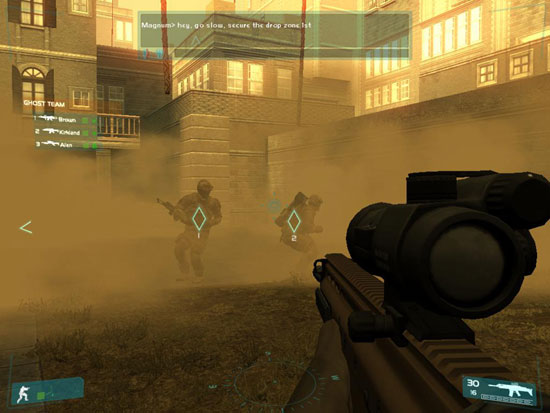 The game is reasonably stable. I had one crash during a mission where I was suppose to plant some C4. I simply restarted the game, loaded up the last saved game and was off again.

Then there was one game loading problem. I finished a mission, exited the game, then when I came back it would load a much earlier mission save, so I had to go back one more save and redo what I finished. Never saw that problem again. And finally, just this morning during a Domination multiplayer game, it froze on me during a major firefight. I had to “Ctrl, Alt, Delete” out of the game. When rebooted all was good again. So I have encountered some stability problems. But not many in all the time I’ve played GRAW.