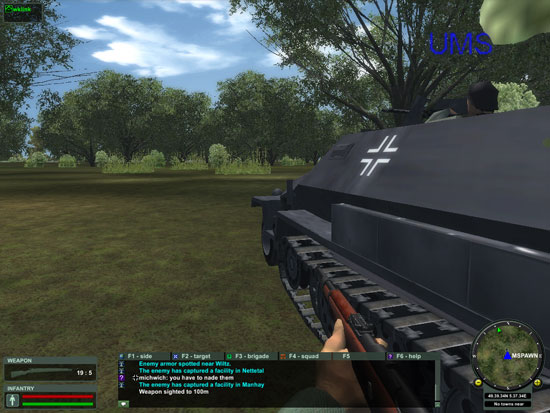 Vehicle and Other Graphics

Vehicle and individual graphics vary between pretty good and just fair. Soldiers are depicted by a couple of different graphical representations. Leaders have special uniforms that supposedly make them more recognizable although most people would recognize them from their icon. The graphical representation of infantry is only so so; they look okay and their running and crawling graphics aren’t bad but they have the same problem I see with all fps style games, the characters have a jerky, almost unrealistic look to them that screamsartificial. This isn’t a slap at BE’s representation, it is as good as any of the others, more it is a generalized realization that we aren’t quite there yet. Some of the newer games are a lot closer than Battleground Europebut still not there.

Vehicles look pretty good. There was some real attention to detail when it came to creating these individual weapons systems and look a lot like the real world systems. You can certainly tell the difference between a PzKw IVE and H in this game. I think there are only two complaints (and minor ones) I can make about the vehicles. The vehicles look too clean and new. The vehicles should be a little bit dirtier, especially as they see wear and tear. In addition it would be nice to be able to ‘skin’ your vehicles so you can personalize your armored ride. The other complaint is more tactical. Tanks left tracks in real life but in the game there is no tell tale marks that a Tiger was here. I would love to actually see these vehicles leave a trail behind them but this would require some changes that probably isn’t high in the priority for CRS software. Nor should it be I suppose.

Sound is fairly good, and immersive. It is really cool to hear that tank come up on you from your rear left side. You can hear rustling in the brush and sometimes can get the drop on an enemy trying to sneak into your area. There are ambient sounds in the game, like birds chirping, which add to the immersion of the game. Vehicle sounds are well done and some of the better veterans can tell the difference between vehicles just by their sounds. I can’t but they sure can.

From the crack of the rifle to the thud of the bomb going off near you (the ground shakes btw) the sounds do bring you into the game. They are engaging without being overwhelming. The only real problem I experienced was the sound of the phantom planes that mysteriously show up without warning – it did scare the crap out of me from time to time and I would like CRS to figure out a way to have that not happen.

Most people can get by on two speakers with this game but in reality you would be better off with a full surround system with this title.

This Game Screams for In-Game Communications

One of the best features of Battleground Europe’s major competitors, Aces High II is its built in coms which are as good, if not better, than any other in any game yet released. If there is a game that screams for in game communications it is this one. Instead players either have to meet up on Teamspeak or Roger Wilco (mostlyTeamspeak these days) or deal with the archaic typing system that is a descendent of the old Air Warrior days. This is directed at CRS, put some coms in your game, it really needs them.

So overall I would rate the graphics as fair and the sounds as above average. Graphically the game has improved substantially from its initial release but now it is getting further and further behind the times. While there are new things in the pike I don’t see any major changes that will totally revamp the engine. I know Unity II is supposedly on the way but from what I understand these changes will be incremental, not revolutionary. I fear that what this means is that a game that is now outdated will be outmoded before all the ‘changes’ get into place. Throwing in a new building here and there, new uniforms for officers and such is nice but CRS had better get on the stick because the game looked dated in 2001 and it really looks out of date now. 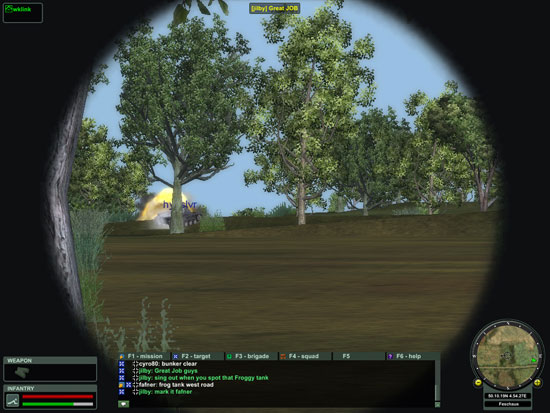