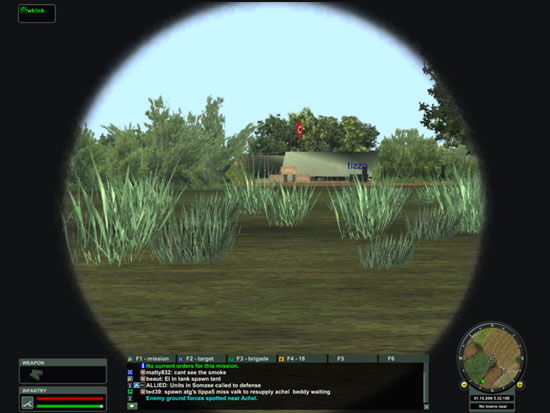 CRS has come a long way from the absolute junk that was the first release of WW2 Online. The redeveloped game Battleground Europe is very playable, very enjoyable and very darned close to what I think CRS wanted to do.

Too bad it took them five years to do it. By this time most people thought that the game would have progressed to a point where we would be fighting on multiple fronts against more than just the Germans, French or British. Italy has been a rumor for a long time but I don’t see it coming for a while. North Africa is supposed to be the next theatre but I don’t see that coming for a while either.

Personally, I am not particularly thrilled about this whole idea. North Africa isn’t the best place for the infantry and without the ability to ‘dig in’, lay mines or call for artillery support the game will devolve into a running tank battle. While armored nuts may find this entertaining I think a lot of the infantry fans will be turned off by the arena. I could be wrong, I hope I am but this is my biggest fear.

So overall, do I recommend the game?  Yes, for the most part I do. Battleground Europe isn’t perfect but it is close to what the original designers wanted. It is ultimately a fun game for those that have the time to play a long wargame. People who want instant gratification, the BF 1942 crowd may not find this the game for them. It requires a commitment of time and effort for success. It also requires playing with other players, something not found in many box games.

Ultimately this is the best combined arms simulation currently on the market. This is a game where all aspects of the WW2 battlefield (except artillery) are in place and almost completely run by players in that game. This means that the battles and ultimately the war on the continent is governed by decisions made and individual groups success. One person won’t change the tide of the war but a decision to attack here or there could create momentum changes that could impact the course of the war. That is what makes this game different from any other game out there.

If you haven’t played the game in a long time, it might be worth trying it again. If you are an initial player of the game and left in disgust, you really should take a look. The game isn’t perfect, nor will it ever be but it is much closer to the dream that CRS tried to put forward five years ago.