Note: Armed Assault is a work-in-progress by Bohemia Interactive. This AAR was based on the E3Expo press demo CD-ROM that was only ~ 75% completed. The final Armed Assault shipping product may be different than what you see in this article. In my second article covering the Armed Assault press release demo (that I got my hands on due to a few new best friends), I will cover the second supplied multiplayer mission, Capture the flag..

Capture the flag is simple and in almost all tactical shooter games you have a team of 4 soldiers against 4 on the other team. This is multiplayer, but since only LAN is supported in the demo, I am controlling the 3 other AI soldiers on my side against the 4 enemy AI soldiers on the other side. I am not sure if more than 4 per team would be supported in the final – I would think so, since OFP does support more. You have options but I go with the default 30 minute time limit and 5 capture victory conditions. 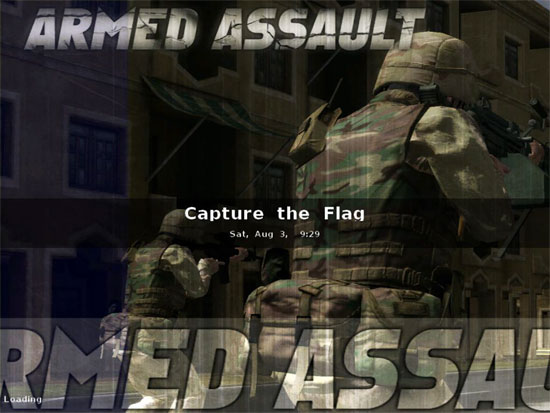 The map displays two town-size areas on opposite ends, with a nice, large opening in the middle. Each team has a flag in their respective town, and the enemy must infiltrate, retrieve, and return the enemy flag to their flag pole on the opposite side. There is a mission zone area and if you exit out of that area you will be instantly killed. 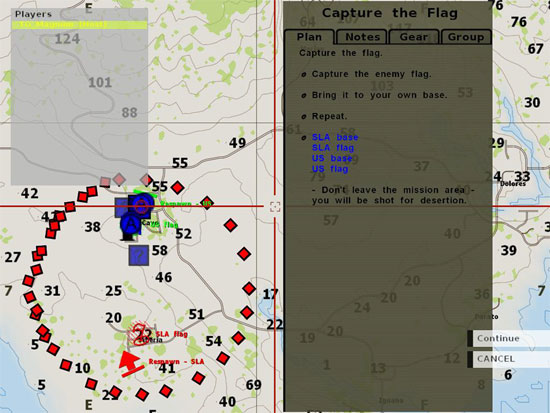 I study the map and like the rolling hills on the left side of the map as a starting position. I decide to take my team on foot along those rolling hills, around the open danger area, and into the flank of the enemy town. We set off in wedge formation (since that’s all the entire demo allows right now). 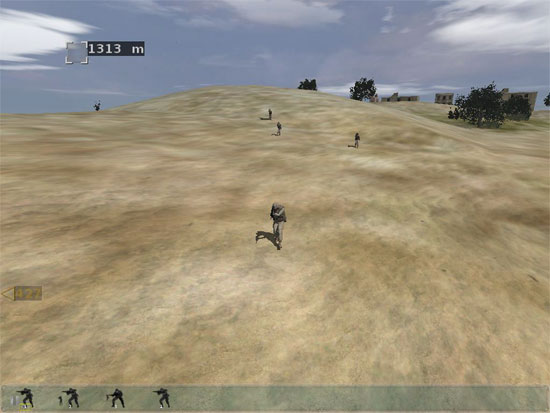