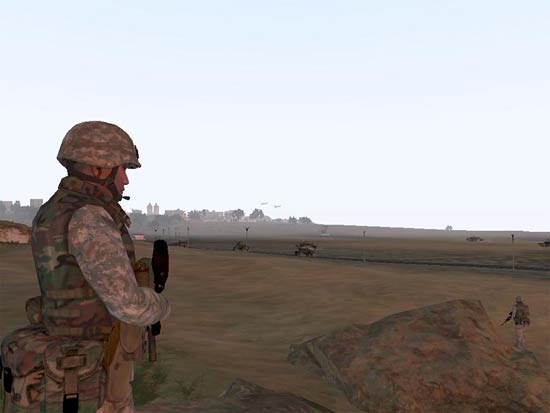 Armed Assault is a work-in-progress by Bohemia Interactive. This AAR was based on the E3Expo press demo CD-ROM that was only ~ 75% completed. The final Armed Assault shipping product may be different than what you see in this article.

Since I got my copy of the much anticipated Armed Assault press release demo, I’ve shared with you readers many screens, a number of video clips, and a couple of after action reviews.

I’ve read your comments in the forums and comments from other readers from different web sites interested in the information. Most have been positive and uplifting, letting me know that my “work” has been appreciated, but there has been a few who demanded to know more, and complained that it was nothing new.

I agree it’s hard to make something new out of a relatively small press release demo. A demo with a four mission single player campaign, and three multiplayer modes. Not to mention that the demo is only 75% complete and has a lot of place holders and missing sounds and textures that will be in the completed product.

Well in this final article, I will take you through the included single player campaign, I will attempt to use any and all available platforms and weapon systems, I will try and answer the many questions posted in the many forums I visit, and my hope is that you will know most of what I have learned with my time playing the Armed Assault press release demo.

I will now focus on the included single player campaign. It goes in mission order, where you start on the opening mission and unlock the other missions as you go.

The single player campaign is called “Armed Assault Promo”. You start the campaign with a nice cut scene showing the many troops, vehicles, and aircraft advancing towards the battlefield. There are fires burning in the distance, signs that you didn’t just walk here, but had to fight your way to this point.

I take a look at the situation map which gives you an overview of the main friendly force army and enemy force army push and eventual collision. It also gives you part of the story so you know why you’re there and what your army as a whole is doing. The situation report is more of a strategic map with a briefing. It shows the movements of Armies, and you can decide what battle to fight, or not for that matter. If you want to fight a battle you click on the cross swords, if not you click “Next” to advance to the next stage.

Once you click a battle, you get a mission briefing/plan. It explains what is going on and what your mission in this certain battle is. Click “Start” and you’re off.

I start with the Battle of Somato. I take a look at the detailed briefing. This mission is a combined force mission; we have to attack, seize, and hold a town littered with enemy forces. All enemy forces must be killed. I am a member of Alpha squad, and we are leading the assault, we have support from two other squads, Bravo and Charlie. We have to attack the town, enter and destroy the enemy anti air units, and then friendly choppers will come in to assist. After we take over Somato, we have orders to continue to another nearby town, Yoro, and take that one as well.

The notes, gear, and the group list remain the same. The press release version has all the gear boxes disabled. That’s why I’ve never tried the other weapons or changed anything in the past. 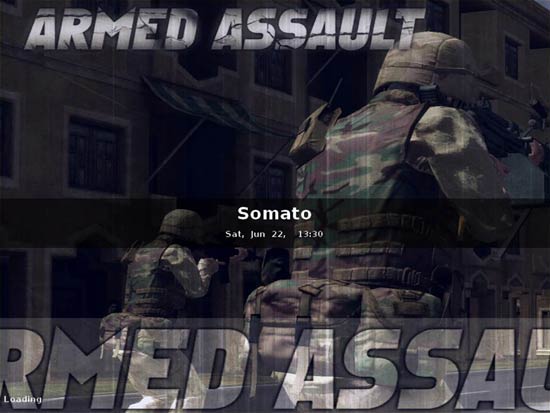