For air combat sim pilots, at first glance there really shouldn’t be much in common between their preferred flight sim and Steel Beasts Professional (Personal Edition) or “PE” for short. There’s no intimate maneuvers to master in an armored vehicle… no High Yo-Yo or Immelman to counter an opponents’ moves. The maximum range of a tank’s cannon is just about the distance of the close-in aerial ‘knife fight’ today; the notion of a main air combat weapon with a range of 3,000 meters would be quaint today in the era of 100km-range air to air missiles. While today’s airborne radars can find and track dozens of targets at once, the best today’s tank commander and gunner can hope for is a clear visual sighting on an enemy tank in the distance, and the Mk1, Mod0 human eyeball. Tanks move at maximum speeds that would cause virtually any aircraft from the last 50 years to drop out of the sky for lack of airflow over the wings. And with the exception of specialized aircraft like the A-10, the notion of armoring an aircraft is foreign… the skins of most modern aircraft can be punctured by any number of basic hand tools.

All those differences are true, but there’s also much for flight simmers to enjoy in PE, which is, in my opinion, quite easily the best tank simulator made. Some of that enjoyment can come from employing similar tactics from your favorite flight sim into PE’s world, where they may have great relevance. Once you move past many superficial differences, flight simmers will find much in common with their virtually armored comrades.

To illustrate that point, and teach a little about tactics, let’s combine some lessons in how to survive and succeed in PE with quotes from the classic book, Robert Shaw’s Fighter Combat: Tactics and Maneuvering (Naval Institute Press, 1985) and available here from Amazon. We’ll also pull a little from the US Army’s Field Manual 17-15 “Tank Platoon.” While FM 17-15 has been replaced with FM 3-20.15, there’s an advantage to the former… it’s available online here and is probably even more relevant to SB Pro PE, since it focuses on the older M1A1 as featured in the sim. In fact, it’s a testament to PE’s reality that so much of FM 17-15 is in fact relevant. Lastly, we’ll pull in some information from SimHQ member “Textanker”, a US Army tanker now back from deployment to Iraq. 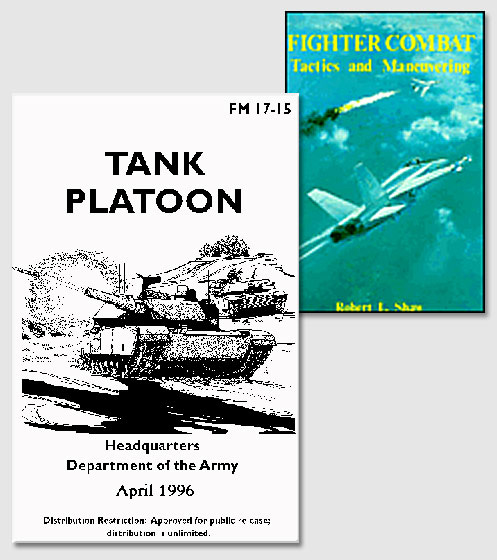 “In nearly all cases where machines have been downed, it was during a fight which had been very short, and the successful burst of fire had occurred within the space of a minute after the beginning of the actual hostilities.”

If you want to get philosophical about modern tank combat, try some Hobbes: life is nasty, brutish, and short. Unlike your modern winged peers, there’s no RWR in your tank, screaming at you when painted by radar. There’s no jammer on western vehicles, no fancy defensive electronics. You have your vehicle-produced smoke to blind the enemy, and your armor to protect you, along with whatever tactical skills your cranium brings to the fight. That’s it. Your life on the battlefield ends with the molten blast of a HEAT round slicing through your armor, or in a burst of flaming metal as a penetrator round wins the battle between itself and your armor. Nasty, brutish, and short.

In the majority of battles, I’ve found that it’s only in the debrief (PE offers a GREAT debriefing tool, by the way) that I understood exactly the true nature of the fight. Quite often, my vehicles are killed by something I either didn’t see or didn’t prioritize correctly.

Find the enemy, lay your cannon on him, and kill him. Do it using terrain, tactics, and your capabilities before he does the same to you. It’s really that simple. If you are faster than the computer opponent by just a few seconds, you’re actually in a different league than he is; first shot generally wins.