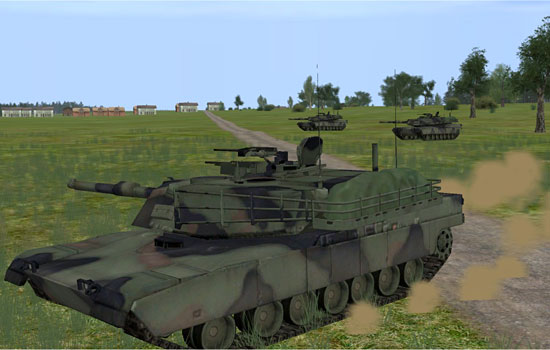 “Nothing succeeds like boldness, and [the enemy] is usually taken aback when boldness is displayed.”

Whether commanding an M1 or a Leopard, you have access to a tremendously powerful engine that can propel your beast along at near-highway speeds. Use that speed and acceleration to your advantage… cross clearings purposely and quickly, and use the speed of your tank to exploit weakness in the enemy’s situation. Particularly when broken into two elements (more on this later), use the speed of your vehicles to quickly flank the enemy and kill him off, then move to safety.

Whether you’re on the offense or defense, a stationary tank is little more than an expensive pillbox that will soon have a date with incoming artillery and direct fire. Use the mobility that you have. The prepared fighting positions that are allowed in PE are great, and do a good job of offering cover for you to go hull-down in a defensive fight, but there’s a ramp at the back of them for a reason…

“The best approach to a battle…is surprise, make your attack and disappear and start a new attack.”

Anyone who says that you can’t hide something that is 60 tons, 26 feet long, and eight feet high has never sweated through the task of peering through a gunner’s sight, searching in vain for a hidden enemy tank who just took out your platoon leader. While aircraft rely on technology for stealth, armor relies on the lay of the land, and the lay of the land in PE is filled with countless gulleys, woods, hills, inclines and other features that must be used to your advantage. True to the nature of military history, PE battles are sometimes greatly influenced by a slight, almost imperceptible, terrain feature. You can often maneuver an entire platoon unseen by reading the terrain correctly.

How do you do this? Well, it’s somewhat a matter of instinct, but it’s also a matter of planning….use the Line of Sight tool extensively in your briefing to cover likely enemy approaches, defensive positions, and key terrain features. Make notes, and rely on those notes in the battle.

Battle space has applications in all phases of mission planning, preparation, and execution. During the planning process, it is a critical factor in the selection of routes, tentative positions, and potential engagement areas. In the preparation phase, battle space information aids in the synchronization of tactical movement and overwatch. Once mission execution begins, the platoon leader’s knowledge of his battle space is critical to his ability to issue timely and effective orders as the situation changes.

The importance of battle space demands that the platoon leader direct most of his battle command effort toward managing and enhancing his space. He must be aware at every moment of how battle space is changing as friendly and enemy forces move and as terrain and visibility conditions change. As the operation progresses, the platoon leader must take active measures to shape the battle space to his best advantage.

As for the act of movement, some general tips are never to crest a hill and, along those same lines of thought, ‘move like water does.’ Successfully exploiting the terrain for stealth typically requires laying low, finding natural routes that bypass enemy positions, and moving with terra firma between you and the enemy. Think like a river and move similarly.