“With an inferior weapon system you cannot fight a superior one. You can have surprise success but not success for a long time.”

You wouldn’t seek a dogfight against a Spitfire if you’re in a Bf110… don’t get into a mano-a-mano tank fight with a Bradley or Marder. Referencing the above quote from Galland is perhaps unfair…the Bradley and Marder certainly are not inferior weapons, in the sense they’re useless on the battlefield. Their autocannons, particularly the one carried on the Bradley, can wreak havoc on lightly armored vehicles and even main battle tanks in range. The ATGMs carried will destroy any vehicle in the Steel Beasts world. The infantry or scouts they carry provide immeasurable flexibility, and decent firepower on their own merits.

However, put face to face with a main battle tank, the Bradley and Marder will end up losing nearly 100% of the time. Their armor is not up to the challenge of brushing off main gun fire, they can be easily penetrated and damaged by virtually every enemy on the battlefield and at least in the case of the Bradley, it’s a pretty large target to begin with.

Scout vehicles like the HMMWV TOW are essentially in the same class; while they certainly can destroy the heartiest threat with their weapons, they are not equipped to handle tanks (or really anything) head-on.

How best to use them, then? Just as an “energy” fighter aircraft seeks fast, slashing attacks against a more maneuverable foe, so too should these vehicles seek to engage in combat under their own terms. Slashing attacks from the flanks are ideal….using terrain for cover and concealment, exploiting an enemy’s blind spots and going for the kill – and then heading back for cover!

Scout vehicles offer a mobility advantage….use them to harass, probe and strike at vulnerable enemy flanks, and then get out of Dodge to repeat at a later point. The value of scouts is their eyes, not their firepower. 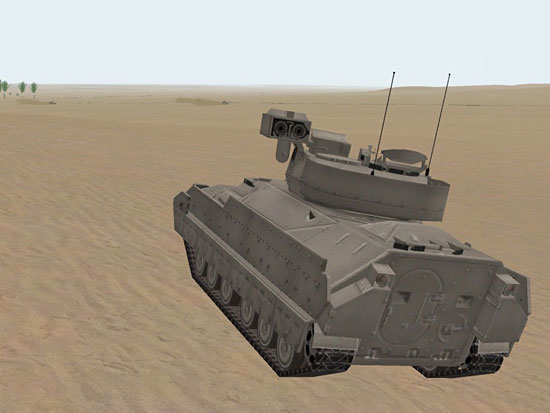 The God(s) of Battle

There are, of course, some lessons of air combat that simply don’t apply to tank warfare, and vice-versa. The ones that immediately come to mind with PE are the role of mines and artillery. While I suppose on some levels, aerial flak is similar, artillery and mines are really in their own league.

Other than to say, “use them wherever and whenever you can,” there aren’t many secrets of success that I’ve found. Effective use of artillery requires good scouting and an even better ability to read the land. Anticipate the enemy’s movement and call for fire where you think they will be when the rounds start falling. Artillery-deployable mines are a phenomenal force multiplier…use them to seal off areas of transit or set up kills zones, forcing the enemy into a situation of your advantage.

Steel Beasts Professional (Personal Edition) is an extremely advanced sim that brings much of the nature of modern armored combat to the small screen. In doing so, it benefits greatly from the real-world tactics used by tankers around the globe today. Some of those tactics are actually not too far different from those employed by fighter pilots, and for those simmers who have spent a great deal of time in the virtual clouds, PE offers a chance to apply the same type of lessons on the nasty, brutish, and short world of modern armor combat.