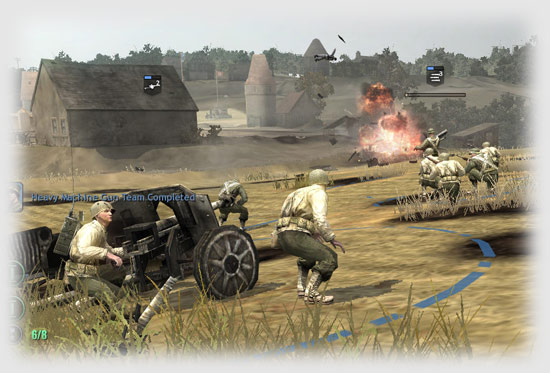 The campaigns open with a nice cut scene, and then slide into the briefing with the tactical maps. The screen fades in and you begin. Like I said earlier, each mission may be different. For example, one will require you to ambush an enemy convoy, another take out a complex, and another to rebuild a bridge under fire and retake a town. The missions are different, but the game play is basically always the same. Near the end of the single player campaign, I was starting to get the feeling of “been there and done that”. My love for the game was beginning to wear off by the single player campaign’s ending. Don’t get me wrong — it is a great game — but eventually you get tired of the same task over and over. 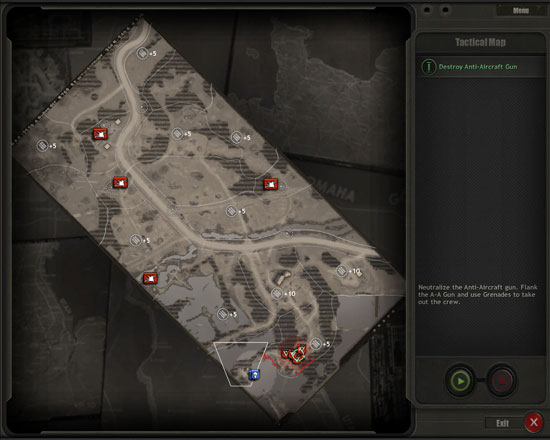 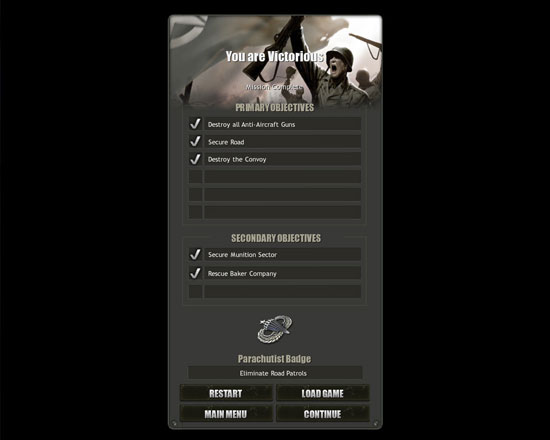 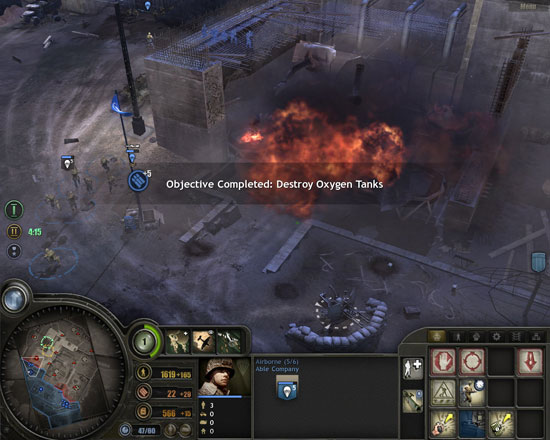 Besides the single player campaign which is only played by the sides of the Americans. There is a skirmish mode. This mode is great for practice and great for checking out units. The best part in skirmish mode is playing as the Germans with a bunch of new equipment and special commander powers. You can play on 2 vs 2 maps or up to 4 vs 4 maps. All against, or with, the AI. This isn’t too bad, but of course it’s never as challenging as playing against a human. 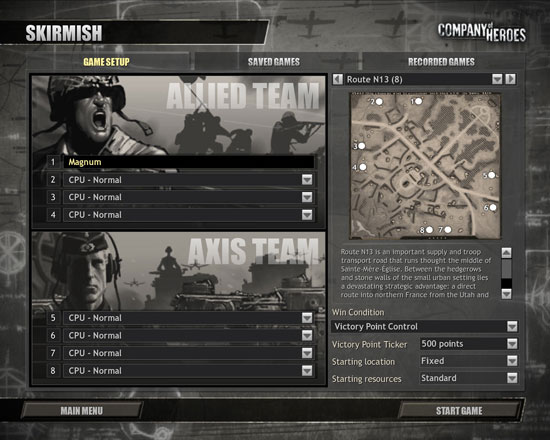 Multiplayer consists of the same skirmish mode mentioned above, but of course online with real people. You have to sign-up an account with Relic’s online service. I personally don’t like this and wish companies would stop it. Just give us direct IP connection capabilities. I don’t want anymore damned online accounts. But to play their game, you have to play by their rules. Relic tracks your stats, your wins, looses and drops. Gives pretty good statistics also for your games played.

You can play both as the Germans and Americans. You can play with partners or alone, or with partial AI. There are two types of online game modes. “Total Annexation” where you must destroy your enemies completely, or “Control Points”, where you capture as many strategic and resource points as possible. Multiplayer runs well and is a blast. I still get smoked a lot and don’t make a good opponent because I can’t think or click fast enough in my old age.

By the way, the skirmish mode — both online and offline — have a saved replay feature that you can replay and watch from all sides. This is an incredible feature and a major game plus.

The audio and video in this game is second to none. Command and control is easy in this game compared to other RTS games I’ve played. Your units react to fighting on their own to a point, so there’s not so much micro-managing, but to win you still have to get involved. Overall the AI is pretty good, but then I’m never fully satisfied with the AI in games.

The missions are well done, but not completely realistic. I guess game play issues had to be implemented to keep the balance. Though the missions are varied, it’s still much of the same thing over-and-over, capturing and defending control points and supply points. The tactical map and the camera controls are incredible. The tactical map shows you the overall goals of the mission and shows controlled territories so you know what you need to take and / or defend.

In my opinion, if you love WW2 combat and / or RTS games in general, then don’t miss this fantastic RTS. Even if you’re a little sick of all the WW2 games, this one is worth the price and time to play. Relic did a fantastic job with this game and I’ve already got my monies worth. I’ve spent more time with this RTS than any other I’ve played.

I’m hoping they do an expansion. How about the Eastern Front? Yes, I know, I’m sick of WW2 Western and Eastern Front war games too, but I still want it for Company of Heroes. It’s that good, that different, and that worth it. Simply put, Company of Heroes is the greatest RTS game I’ve ever played.