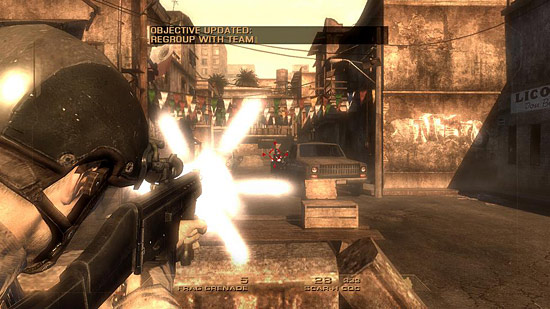 In order for me to have something to compare it to, I decided to buy copies of Rainbow Six 3 for the Xbox (it’s backwards-compatible to the 360) and Lockdown for the PC. After spending an hour or two with Lockdown, I could see why there was such a hue and cry from the purists. The Xbox version of Rainbow Six 3 borrowed heavily from Raven Shield, but it lost a lot in translation.

Rainbow Six: Vegas had a lot to prove.

The Rainbow Six pedigree is thoroughbred counterterrorism operations, heavily armed, well-trained operatives who specialize in high-risk situations. If you’re looking for a return to the Rainbow Six of yesteryear with a full roster of at least two dozen operatives, a full planning phase, and an arsenal of firearms that rivals Charlton Heston’s private collection, you’d better hang on to that old copy of Raven Shield. 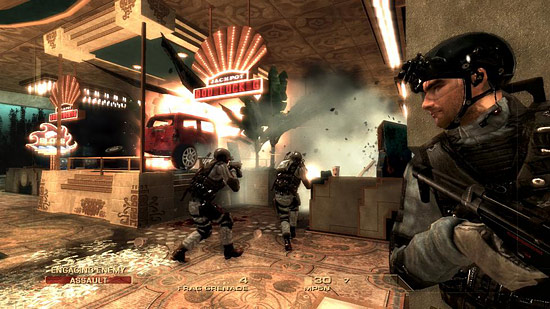 However, what Vegas does is bring you a tactical simulation experience unlike anything ever to grace the drive trays of a console. And it does it with a vengeance.

Your AI teammates are some of the smartest I’ve ever seen. The amount of babysitting we’re accustomed to with some tactical sims can be oppressive. These guys are smart, they enter and clear rooms very intelligently, and were — in some cases — better, quicker shots than I. One of the new tools you get in Vegas is a Splinter Cell-esque fiber-optic snake camera with which you can ‘tag’ a bad guy on the other side of a door or window and when you and your team enters a room, that’s the guy they kill first.

Your guys are crack shots and they do not mess around. They use and fire from cover efficiently and will run from a grenade thrown at them and return the favor with a fusillade of gunfire. 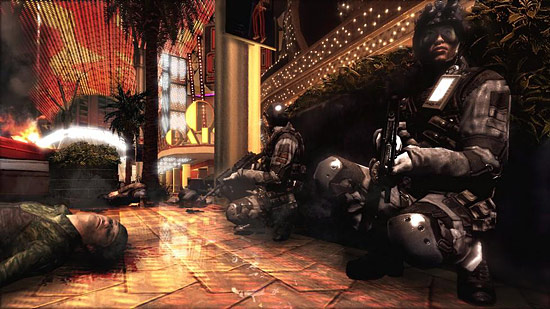 Gun battles in this simulation are ugly, vicious, and short. A Merchant-Ivory production it ain’t. What it lacks in subtlety it makes up for in excitement. Several times after an intense firefight, I had to dry my sweating palms off before taking up the controller and pressing on. They are also not clean affairs. Blood spatter is quite real as well as the steady torrent of obscenities streaming from the bad guys — and occasionally you own mouth. The protagonist, Logan Keller, sounds a whole lot like my cousin Danny in both speech pattern and accent.

The game’s premise is that some Latin-American terrorist organization has their hands on a ‘device’. I’ll leave it to your imagination. Hey, at least it isn’t Dr. Evil stealing warheads from Crapmenistan. It’s close, though. Anyway, they sub-contract out the grunt work to small army of disgruntled ex-special forces types. At least it wasn’t postal service employees. Then we would have really been up a creek, although you’d think the TSA guys at McCarran would’ve caught all the French-made assault rifles in the luggage.

Anyway, I’d have hated to see what kind of shape the rest of the world was in, because apparently all the Rainbow team can spare to clean up this mess is three guys. Those of you wanting to see all the team members there are going to be disappointed. Oh, yeah, by the way, John Clark retired and Ding’s in charge now.