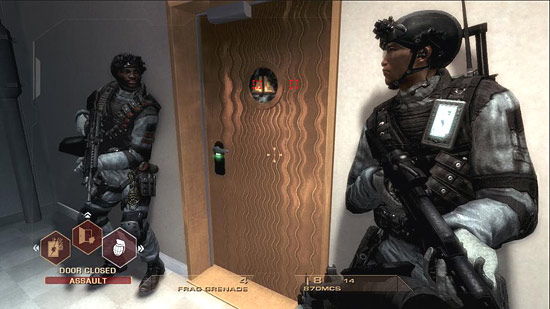 The gameplay mechanic is very similar to what you’ll find in Gears of War or Ghost Recon: Advanced Warfighter. That is, your approach should be ‘stop and pop’, not ‘run and gun’. You will die fast if that’s your approach. Cover is sprinkled liberally all over the maps you fight on and you ignore it at your peril. The best way to complete the game is to move from cover to cover, even if you think the area’s clear, because it isn’t. You won’t get far before the bad guys suddenly appear in front of you, or to the sides, or from behind…

Vegas throws a tremendous amount of terrorists at you. No silly boss battles, or ground/air mismatches with a Hind gunship, just lots and lots of people to shoot. The end is rather anticlimactic, too. However, these bad guys are not the same cream puffs you saw in Lockdown, these guys will, like your AI teammates, use and fire from cover fairly well. They will also throw smoke and flashbang grenades to blind you or cover their movement. You can’t circle-strafe your way out of this one. They like to flush you out with frag grenades and then fire at you while you beat a hasty retreat.

The ability to go back and replay missions is here and it is a very novel approach that I haven’t seen before. It works just like a DVD movie where you can select your ‘chapter’ and ‘scene’ and start exactly where you want to. Very slick, very cool. 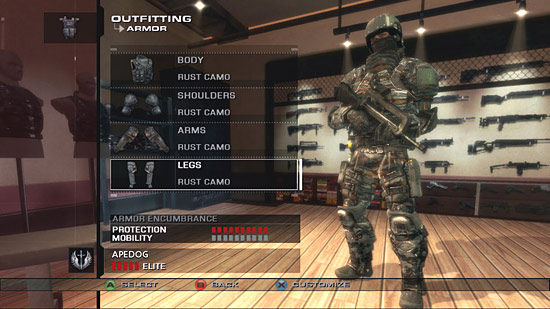 The health system in place is essentially the same as Splinter Cell: Double Agent and the Call of Duty games recently released for the 360. If you’re hit, the world begins to get very blurry and dark. Avoid fire for a short time, and your vision returns to normal, your health is restored, and you’re ready to press on. This would be the one giant failure of complete realism. What I would have liked to see was a gameplay mode (maybe call it ‘expert’) with a realistic number of bad guys and a return to the one-shot, one-kill style.

The guns have been cut down to a bare minimum, but this may be more real than you think given that you’ve only got one helo and your support staff consists of one person with a laptop. You have spaces for one rifle (and it can be an assault rifle, heavy machine gun, or sniper rifle), one submachine gun, and a sidearm. You can have only two types of grenades and you can carry three of each type. My favorite of the bunch very quickly became the H&K G3KA4 in semi-auto firing mode. You could really deal out a beat-down with it.

You can attempt the campaign on your own with the computer-controlled friendly AI to accompany you. Or, with Xbox Live, you can complete the campaign with your friends in Co-op mode along with several other multiplayer gaming modes like Attack and Defend, Sharpshooter, etc. You have complete menu that will allow you to set up your individual operative to your liking, giving you a very individual feel. Setting up your own multiplayer session has never been easier; the amount of replay it holds is tremendous.