Magnum: Will the player be able to issue commands to other tanks, and/or other units? Maybe a map view where you can lay and plan waypoints?

Nikita: All the commands concerning the actions on the battlefield are issued for the tank group at the beginning of the mission, or in the course of it by means of radio stations. A map with waypoints already exists when a mission starts and a player and other tanks of the group will have the map as a basis for actions.

Dmitry: The idea behind this approach is to make player as a tank commander act accordingly to general mission objectives and commands issued by some imagined army command. That is what tankers had to do in reality. The tanks under AI control will try to do the same in normal situation, but support of player’s non standard initiatives is also considered.

Magnum: Will the tanks’ armor specs and ballistic calculations be realistic based on WWII data, or is it a simple, hit it twice with this tank and it blows up?

Alexander: We have used the realistic armor specs and ballistic calculations. Our consultants provide us with relevant data about vehicles, ballistics and armor of WWII. We searched for such information in open sources and in books of respected Russian and German experts, and in German and Soviet army reports. We always compared the data to have an objective picture. So, all these specs were specified in accordance to the real data of WWII and a player will have to apply all his skills to hit the enemy tanks successfully before an enemy tank hits the player’s tank. Armor specs, its stability, shells specs — all such elements are united in one database. Calculations, in case of a hit, are done based on this data. In addition to armor thickness, armor penetration and shell penetration will take into account such factors as the approach angle between armor plate and a shell, the reduction of shell speed in accordance with the distance (reduction of shell penetration).

Magnum: Are proper armor slopes and different parts of the tank hit calculations modeled? Meaning is the rear armor of a tank weaker then the front, can tracks be hit and disabled? Can certain parts be damaged but continue operational?

Alexander: Unit armor is divided into zones of different armor thickness so the result of a hit into different tank parts will be different. In the process of creating the physical model we took in account armor slope and hit direction. There are calculations of crabbing from the normal of an armor plate and penetration is re-calculated. As for various kinds of damages — a player can fire engine compartment, hit a turret or try to blow up ammunition equipment. A player can damage or fully destroy tank chassis. And of course tank trucks can be broken and a tank can continue the battle as a steady fire point. As a whole damaged tanks will act differently in accordance with the damage. For example, a tank with damaged turret (if it can move at all after hit) will try to escape backwards. And an accurate hit from an enemy tank can stop the engine of the player’s vehicle. But the problem is solved very quickly — restart the engine and continue the duel. 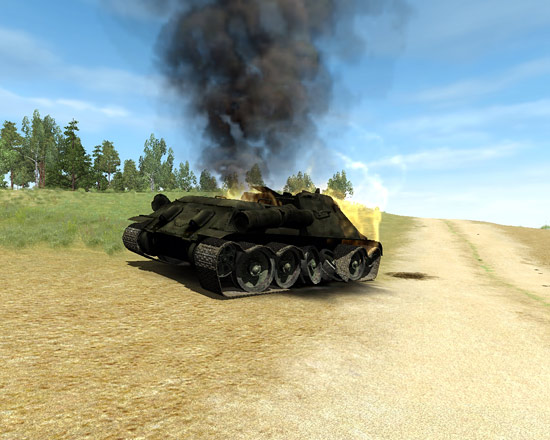 Magnum: Will smoke and other WWII era countermeasures be implemented?

Nikita: We implement some of the measures. For example, one of the most effective tactic tricks of the Soviet T-34s was ambushes. This tactic can be used widely in the sim due to the special game algorithm. It implies different tank visibility in different environments. A tank is fully visible in the open field and cannot be visible from a distance if it is hidden in the bushes, forest, etc. As for other war tricks such as smoke, night attacks, of course they bring some good fun into game play. But from the position of playability, such features are of less practical use.With smoke and night visibility, it is practically impossible to find the enemy through the lenses used in tanks in WWII. And the question is, what’ good is it in the battle if you can not see enemy units, and only hear them shooting some where else?

Magnum: How is the multiplayer gameplay going to be modeled? Will there be both LAN and Internet multiplayer? Will there be several game types, with different goals? Is it planned to have other types of units (artillery, infantry and tank destroyers) take part in the online fighting as support units, or will the multiplayer be just a tank vs. tank shoot-out?

Nikita: Multiplayer will be available both via LAN and Internet. We are working on two network game modes — “Skirmish” and “Team Play”. In the first mode based on common Death Match, players can fight against each other, up to 16 players at a session. The second mode implies better command in tactics and strategy — two teams struggle against each other with a common objective. One team tries to accomplish the task, the other tries to prevent it. In multiplayer mode T-34 and Tigers can fight side by side, players can add some BOT’s and play with them.

Magnum: What about air attacks and will infantry be modeled in and functioning, not just static? Will you have the choice of which side to play?

Nikita: Air attacks are also designed as an important element of fight. Aircraft will never let any tank act passively standing in one place — such a tank will be attacked from the sky for sure. So a player needs change positions from time-to-time. Infantry acts according to the fight flow and have the main tasks of the battle as primary no matter if it is attacked, counterattacked. A player can choose to fight in two campaigns taking each side: USSR and Germany. But when the player has chosen the campaign he will have to participate in the series of battles on that side.

Magnum: Why such a short time span (1944)? Any plans on making’ things start a few years earlier? I mean by 1944 the Tiger was becoming’ out gunned as there wasn’t that many to make a big difference at that time. Or is this basically a T-34 game?

Nikita: When we started working on the project we considered many WWII campaigns, battles and even countries to be reflected in the game. But of course such a range is too wide to be presented in one game. Of course we are willing to model such events as the campaign in Africa, operations on the western front of 1941… But from the positions of game balance it would have to be another game with different title — for example, Pz.IV vs T-34-76.

Dmitry: I would like to add that one more reason to narrow the setting is our desire to finish the game sooner. Several months ago we asked community if they wanted to get the first game sooner, start playing and wait for sequels/add-ons or wait longer for a wider expanded game. The community chose the first option. 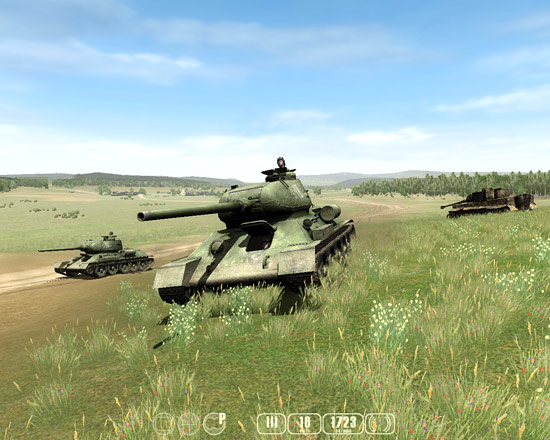