Magnum: Can you give us some more details on the campaign system? Will there be some effect of the previous mission on the next one?

Nikita: The campaign implies several missions based on war episodes of the operation “Bagration” in summer, 1944. So, we cannot create such a campaign structure in which a previous mission influences the following one because the main campaign events are dispersed in time. We do try to choose the most impressive battles and events of that summer campaign and I guess that it is far more important and interesting for a player than a clear, direct time sequence of consequential events. 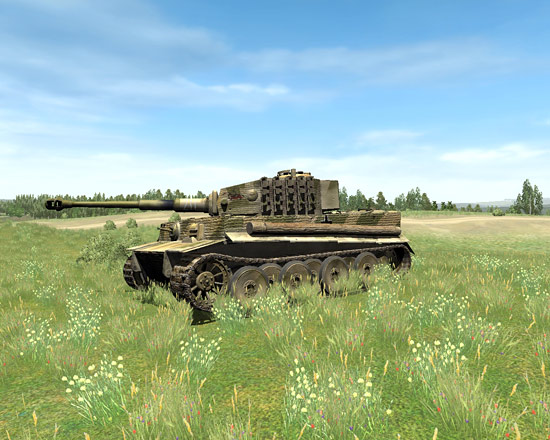 Magnum: What about supply shortage modeling (like lack of ammunition and fuel)?

Nikita: Supply shortages will be a problem for a player. At the beginning of the battle the tank is fully equipped with all the supplies in accordance with its technical specifications. So, I can say that the shells number is not so much to afford to shoot without proper aiming. A player should constantly check the supplies in stock.

Magnum: Will there be some morale and battle weariness effects simulated? Like if you destroy 4 of 5 tanks in the attacking unit, the last panics and starts retreating (like in Panzer Elite)? Or, if the unit is tired it has lower spotting, reloading and precision, etc.

Nikita: Well, looking back at your example, in “WWII Battle Tanks: T-34 vs. Tiger” the last tank will retreat in some missions, and in others will not because there is no way to retreat. Situations on the battlefield can be different. But besides such an effect there are effects of direct influence of damage on vehicle behavior. We simulate these effects of damaged tanks when such a vehicle moves slower, stays at one point longer, frequency of firing is reduced. As for retreat, it is more the task of scripted events than of some behavior model simulation. I suppose such a feature is a good one to replace the one you have mentioned. And really, I’m not sure that tanks having 4-5 casualties will be retreating. They will re-form under new conditions of the fight — and this will be in “WWII Battle Tanks: T-34 vs. Tiger”.

Magnum: Will senior unit commanders (tank CO’s for instance) be able to issue orders and/or command other force elements… that is, besides tankers?

Nikita: We began developing a tank simulation, which is supposed to be the first one in the line, and we concentrated at first place on the full simulation of units, the tank crew actions and interactions inside the tank. So in “WWII Battle Tanks: T-34 vs. Tiger” a player cannot give orders to other vehicles and to tanks from his unit. If such a feature were in the game it would be a game with a stressed tactic properties implying creation of a tactic map, control set, etc. As we think about possibilities to move further with a series of tank simulations, it is possible that such elements will appear in future games.

Magnum: Can infantry close support armor? Are there going to be “tank riders” for instance?

Nikita: Right now there are no tank riders and missions where tanks are used as a shield for infantry. We simulate the battles in which tanks are the main, or one of the major forces.

Magnum: What will be the basic unit elements for the sim… individual vehicles, heavy weapons, and infantry fire teams, or platoons, companies, etc)? What is the game’s basic unit level of command?

Nikita: The basic element of our simulator is effective command of the tank: solutions to any tactical challenge, proper use of guns and cannons, zeroing in and fire for effect, corrections and aiming-off calculations. And this level of an entire command of individual unit takes the maximum effort from the player if he wants his tank to be operated in the most effective manner. 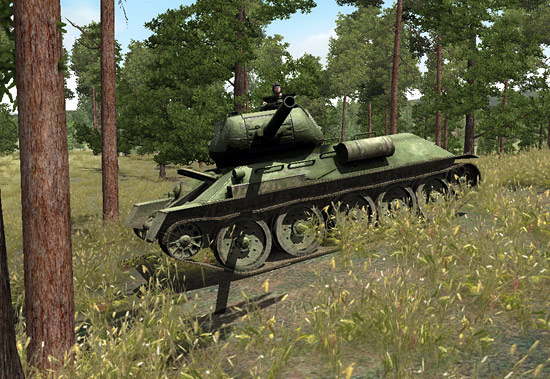 Dmitry: As the matter of fact release date outside the Russia depends more on the western publisher. Negotiations have been just started and I can not tell you anything definite now. The Russian release is planned for Summer-Fall 2007. All distribution methods and models are being considered.

Nikita: We expect high system requirements but we do our best to preserve all the game qualities on an average system. First we think about the gamers who will play “WWII Battle Tanks: T-34 vs. Tiger” in the future and we do not want them to have many limits connected with system specs. So, minimum demands are Intel Pentium IV 2.0 GHz, a graphics card with 128MB RAM and no lower than a ATI Radeon 9600 or NVIDIA GeForce 6600 class of card. The graphics card is always the most important question under discussion. 256MB on the card of the previous or last generation are always a plus. It best allows enjoying the full-scale potential of the game.

Magnum: Thank you for your time and the answers. A new detailed WWII tank simulation is long overdue. We’ll be following “WWII Battle Tanks” as it progresses.

Dmitry: Thank you and your readers for the interest in our new tank simulation.

WWII Battle Tanks: T-34 vs Tiger Page 5
A Last Noel for the IRLF