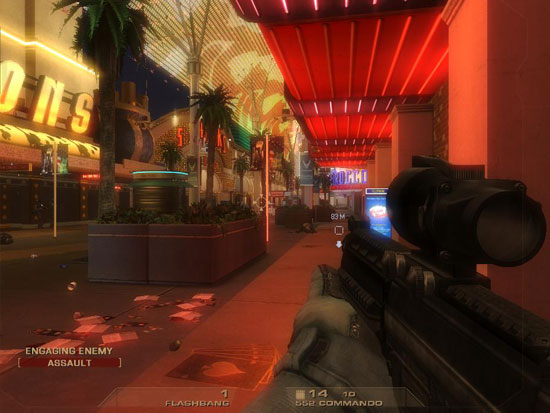 Well, another year, another new Rainbow Six game. Last year we were treated to one of the worst tactical shooters ever made. Rainbow Six: Lockdown for the PC almost unanimously got terrible reviews and negative opinions Internet wide. Ubisoft really shot themselves in the foot with that release. Will the new version, Rainbow Six: Vegas, be another shot in the foot, or will it redeem the otherwise fantastic series?

Rainbow Six: Vegas was first released for the Xbox 360; my good friend and SimHQ Console Sim Editor Chuck “PFunk” Bellows reviewed that version here. A few weeks later the PC version was finally available. I wasn’t really that interested in the game after the bad taste left by Lockdown until I played the Xbox 360 version — and loved it. If the PC version is just as good, then we may have a winner, I thought. That, of course, is the million dollar question.

First off, I must tell you that a Shader 3.0 enabled video card is a must with Rainbow Six: Vegas and it will not work with anything less. Period. This is a major strike against the game already, considering most gamers I’ve talked to don’t have a Shader Model 3.0 enabled card yet, it’s relatively new and on only the latest video cards.

As you can see the requirements are pretty high for this game, and as usual, the “recommended” is really the standard.

I ran the game with everything set on high and at 1024x768x32 at 75 Hz on my system and averaged around 30 to 50 frames per second. The only problems I ever had with my settings and frame rate occurred after starting a new mission. Once spawned in and before any action started, I would get a second long pause in game, then never had another issue until the next load up. The pauses always happened at a fresh mission load long before enemy contact so I was OK with it. 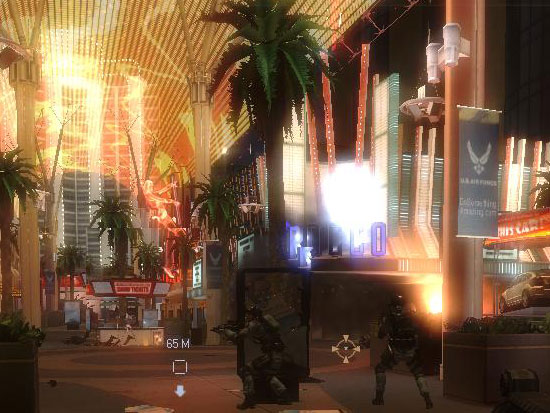 Rainbow Six: Vegas takes part in, well, Las Vegas. But that’s not all; you’ll be surprised to learn that you start the single player campaign in Mexico. And it looks almost exactly like Ghost Recon Advance Warfighter’s Mexico. Then after a little action south of the border, you move into sin city, and end up at, of all places, Nevada’s Hoover Dam.

Guess what? Clark and Chavez have retired and there’s a new Rainbow Six team — lead by you. You play as Captain Logan Keller, with a smaller team of operatives.

Terrorists have taken over America’s playground, and the entire world is watching it live on TV. You and your team have one night to bring order to chaos, and find out exactly what those terrorists are up to, and then put a stop to it. 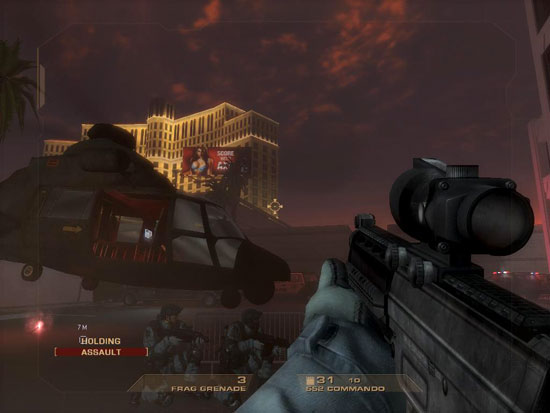