I believe Rainbow Six: Vegas is one of the best tactical shooters to come along in a while. Sure it has a lot of leftover console elements in it, but the game play, the storyline, and the tactical action makes this one any tactical gamer wants to experience, both online and offline. Now let me re-state that this is not the classic tactical shooter of yesterday. It is a new breed of tactical shooter, one with more of an action element. Sure it’s not perfect, but don’t miss this game just because it has more of an action mode. With the right gaming buddies, you can make it as tactical as you want.

I do fear that Ubisoft may have made a couple of huge tactical errors in the release of this product and their history with the series. We all know what a disappointment Lockdown was and that may have already cost Ubisoft sales. And then there is the required Shader Model 3.0 graphics requirement that’s going to knock off anyone without one of the very latest video cards. Again, this is going to cost a lot of sales. Then finally, the multiplayer service that is required. That’s three strikes — and in baseball that’s an out. It’s unfortunate because I really believe that this game could have been a contender for Game of the Year. But in the world of computer gaming, most games die within months of release. I feel this is what will happen with Rainbow Six: Vegas and that’s a shame.

If you want a great story, plenty of action, and can handle the computer requirements, then pick up this bad boy. Even if you’re a tactical diehard, I don’t think you’ll be disappointed. But if your only true interest is multiplayer, then I’d recommend you pass just because of the Ubisoft dedicated service and the lack of a dedicated server app capability. Then there is the difficulty in finding good, tactical game on open servers. Now of course if you belong to a fantastic gaming group like I do, as long as those members support and play the game, then you can’t go wrong with Rainbow Six: Vegas.

Like I said with GRAW, don’t look at Rainbow Six: Vegas as the next in a tactical series, look at it for what it is, the new generation of tactical shooters. There are plenty of tactics and techniques in this game, along with aninsane number of tangos which equal action. 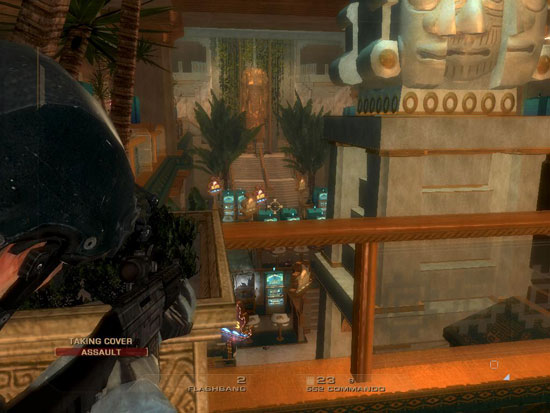