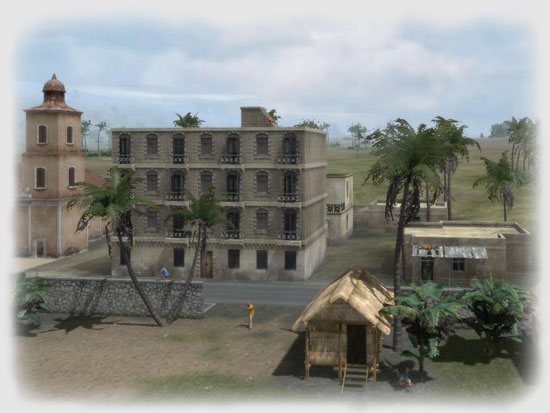 I’m going to start with something different for this review. Usually you talk about the package and set up, then maybe the graphics and sounds, then the single and multiplayer aspects of a game. But for this review I’m starting with the included mission editor. Why? Because just like in Operation Flashpoint, the editor is the secret to this games success. Armed Assault has the most detailed, most intuitive mission editor I’ve ever seen. You can do almost anything with this editor. I look at the mission editor for Armed Assault as a “virtual sandbox”. You take a piece of land, you place your units, both friend and foe, you assign waypoints, actions, combat modes, reactions, and then you play. Sure there’s a lot more to it than that, but that’s the basics. If you’re willing to research and learn by trial-and-error, mostly with the many script commands, then you can make a mission as detailed as you want. You can practically do anything with this editor if you know and understand the scripts involved. The mission editor alone would be worth the purchase because it’s like a toolset to make your own combat computer game.

In Armed Assault there are two land masses to use for your sandbox. For some reason only one of the land masses is used for all the missions in Armed Assault. The second land mass is just there, with one dogfighting mission made for it.

The one land mass is over 400 square kilometers in size. That is a lot bigger than the OFP land masses, but I still wish more than 2 were included. Maybe a desert and a snow covered environment.

Let’s not forget the popular “add-ons”. There’s already a hundred or so out for Armed Assault with plenty more to come. Add-ons are made and shared by talented artists and programmers in our gaming community. There are new add-ons being released daily that include new weapons, new vehicles, new aircraft, new armor units, new skins, and new terrain. Almost anything in-game can be an add-on or improved by add-ons.

So with the mission editor and the hundreds, if not thousands of “soon-to-be released” add-ons for Armed Assault, you can see the potential for this game. But don’t worry folks, Bohemia Interactive decided to share some single player missions, some multiplayer missions and a story driven campaign all for free… when you buy the mission editor! Just kidding!