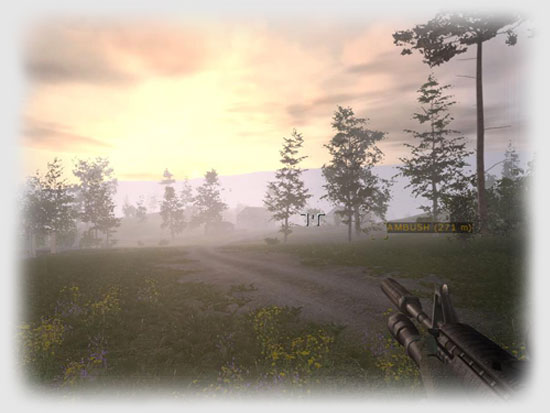 The graphics in Armed Assault are amazing. Everything from the 3D models, the animations, the grass, the sky, the moon, and of course the explosions are beautiful. All this beauty comes at a price and that price is potentially low frame rates on some machines. Armed Assault has some unique features like real constellations and tides. You can also see the waves hitting on the rocks or flowing over the beaches. Armed Assault has some incredible lighting effects too when using HDR lighting effects. The sun shines into your eyes — and the eyes of your enemies — which makes planning an attack or being involved in a firefight something to plan out first. The landscape and battlefield is an incredible sight to see. Bugs fly around your head, birds fly over head, trees sway, and buildings collapse. Yes, fire a few shots of SABOT at a building and it will crumble to the ground with a billow of smoke rising into the air. Incredible stuff to see and do, and it also has a tactical purpose.

Click here to see examples of the graphics in Armed Assault.

Not too much of a big deal, but there is one negative in my opinion with the graphics. When your character runs across the battlefield, the motion and movement seems a bit stiff. I also thought the first person view was a little too close to the ground, meaning I feel I’m about 4-5 feet tall instead of 6 feet tall.

Sorry to say, the audio in Armed Assault is just average. It is just not as strong as the graphics. Already there are a couple of sound add-ons released to punch things up. Also, there are some known problems with sounds stopping in-game. The realism and placement of some of the sounds are questionable. Many times I heard a convoy coming from a certain direction, only to learn the convoy really wasn’t moving. Or, there have been a few times where I would hear a sound that seemed to be approaching on my side, only to learn it wasn’t accurate and the enemy came from another direction. I really do hope they fix these audio miscues and fine tune the angle / direction of the sound effects.