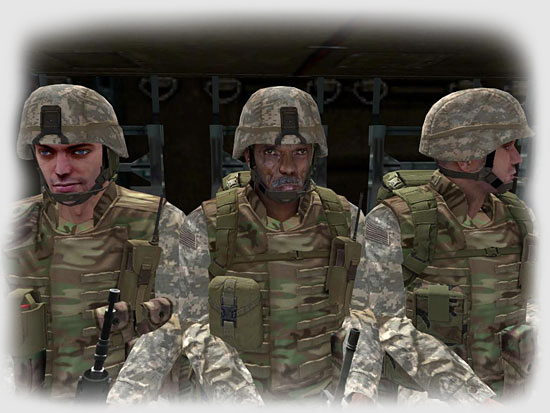 The Achilles heel of all tactical shooters in my opinion is artificial intelligence. Armed Assault is no exception. There does seem to be a slight improvement over OFP, but the friendly AI still get in the way, and don’t seem to be able to do much without your detailed control or input. Yet, the enemy AI continues to be incredibly accurate with their eye sight and rifles.

The AI programming is acceptable, and it doesn’t hamper (too much) the game play. But I have still noticed my fellow troopers walking in my line of fire, or moving out of formation, or exposing themselves and getting themselves killed then eventually the whole squad killed. You have to keep a sharp eye on your men, and constantly give them orders to fall back in formation, or to go prone. I really don’t think AI is ever going to be up to par for computer gaming needs. But the newest computer games, including Armed Assault, are doing a better job than in the past. More work needs to be done but I can’t pretend to understand how AI programming works in a computer game. I know that if I shoot at an enemy squad in Armed Assault, most of the time they hit the dirt and go prone, but yet my guys don’t seem to know to do that unless I tell them through the command menu.

The AI drivers still act like they broke into the wine cellar and consumed a few bottles before the mission. It is best to always try and drive yourself. The AI doesn’t understand basic stuff like hull down positions or getting out of an ambushed kill zone. Again, you have to control them to keep you and your men alive.

Its simple folks. Operation Flashpoint is arguably one of the top ten PC games in computer game history. Armed Assault “ups” that standard. If you are any type of tactical shooter fan, or a virtual battlefield fan, then don’t pass on Armed Assault. Sure you can wait for the US release in May, but then you’ll be missing out on two months of fantastic gaming. The UK v1.05, will surely be patched and updated to match and work with the US version when released.

Armed Assault has a fantastic editor, and is user friendly. There is already such a huge following for this game that it is almost guaranteed to be as big as OFP, if not bigger. More add-ons, more units, and more missions will arrive in time. I’m willing to wager a pay check on it.

Armed Assault looks good and sounds good, but is not perfect. Bohemia Interactive Studios really indicates they’re dedicated to this game, and I believe more support patches and updates will arrive in time. Maybe even official add-ons?

Once you pick up a few more missions, you have a ton of action included for you single player gamers. But no question the highlight and life’s blood of Armed Assault is the excellent multiplayer. A few minor bugs here and there, but I am fully confident that they will be identified and addressed.

My simple conclusion: If my wife (and she has tried!) told me I had to get rid of every computer game I had except for one. Armed Assault would be the one I would keep. I really believe do that Armed Assault will be my main squeeze for the next 3 to 5 years.

Piper Cub wheels, tires and hub. Used. For man cave display use only.
$50.0