Those of you that haven’t followed the progress of WW2:RTS through Wartime Command to Theatre of Warmay not realize that this game is built on the engine of Oleg Maddox’s IL-2 Sturmovik flight simulation. While this engine has been adapted quite well. It does have one problem. IL-2 does not run on Windows Vista. Our preview copy of Theatre of War had some problems running on my planned co-previewer’s Vista based computer. “Magnum” had some real issues getting ToW running, and ultimately threw-in-the-towel. After we realized “Magnum’s” problems running ToW, I scrambled to get additional serious time with the game to produce this preview.

We received confirmation from Battlefront that Theatre of War does indeed work fine on Windows Vista, so the problem “Magnum” encountered was probably related to his graphic card drivers.

It’s our plan that “Magnum” will do the final gold version review, so watch for that in the coming weeks.

This title is pretty well crafted, certainly well done and polished in its late beta form. It seems pretty stable as well. I only had one crash during my entire gameplay time. That isn’t bad for a beta!

Graphically, this is among the best of the real time strategy games out there. It certainly is head and shoulders above any other “true” wargame currently in production. This game will be compared to Company of Heroes for its graphic fidelity, and although I honestly think CoH is a better “looking” game, Theatre of War is by far easier to play and has a better “feel” than CoH. This is a true wargame, with true hit values and no building or mining for resources. 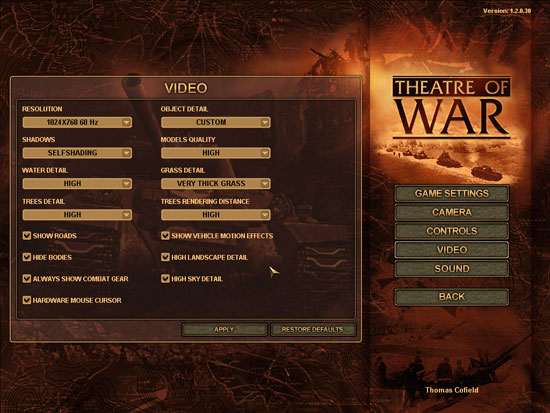 The maps look very good. Something like forty different maps are used in the creation of the game. I am not sure if that is forty maps for all missions, or forty general large maps where smaller games are put together. When you see a map, there is a lot of space outside of that map where you cannot travel to, but you can see far into the horizon. It doesn’t look like pseudo map filler, but actually drawn in maps that may be useable for other battles and missions.

Trees are represented as individual, well, trees. Forests are there, although relatively sparse. In IL-2 large forests were rendered in the “block o tree” style but in Theatre of War each tree is represented. This looks pretty good but some will find the trees somewhat sparse and very large numbers of trees I suspect may cause a graphical and performance hit on most machines. Water looks good as in the final stages of IL-2. I am not sure if fiddling with the .ini file in this game creates changes like in IL-2. I wasn’t willing to risk screwing up the game to try this. I am sure we will find out in due time.

Vehicles are very well represented and look amazingly lifelike. Vehicles show damage in appropriate places. Blow the track off a Panzer and you will see the damaged road wheels and drive wheels. If the crew bails out you will see the hatches open and you can watch them unload from the vehicle. They look pretty good and have realistic animations. IL-2 flight sim players would love to see the infantry somehow retro-moddled into their flight sim. 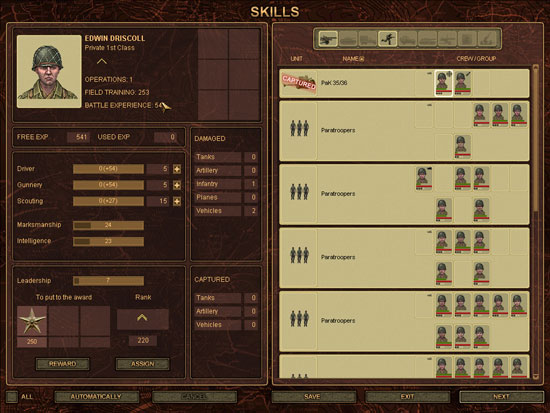 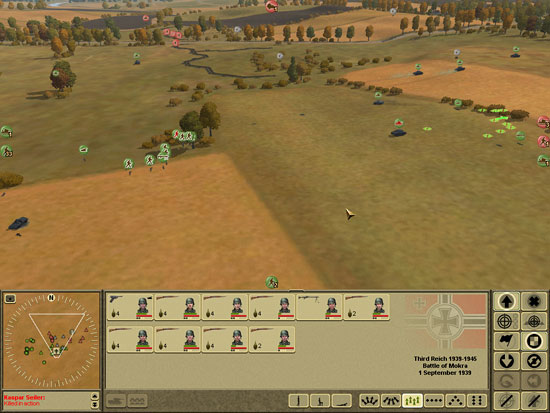 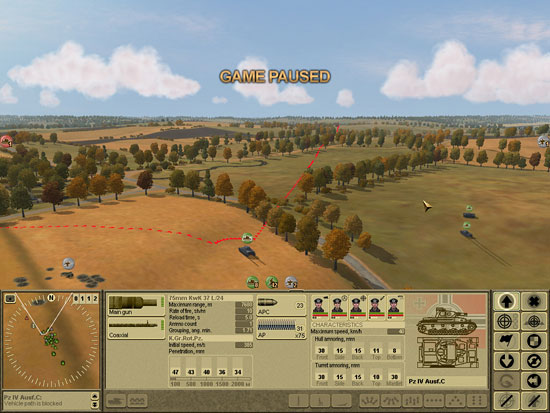