Well as you can tell if you read my review, this has potential for PC “Game of the Year” written all over it.

Graphics and sounds are incredible. Game play and execution is well done. The single player campaign is a must play. Multiplayer is very well done (if they will just fix the server finding issues…).

Yes, this is a run and gun game. Know what type of game you’re getting. But also open your mind. sure I can take tons of hits, back away and recover, but it’s a movie, an excellent movie that you are the star of. Go get your Oscar!

“Call of Duty 4 is the most intense, most emotionally charged computer game ever released, IMO and apparently many many others…”

“I just finished the SP campaign about 15 minutes ago, I’m still pumped with virtual adrenaline… the game ended in one of the most emotionally charged ways I’ve ever experienced in 25 plus years of gaming… I sat back in my chair, let out a big big breath and pondered the story and the ending… absolutely incredible… then I sat through the credits (because there is a special, and equally excellent mission after the credits), as I waited I got up and paced back and forth across my room… waiting, waiting for the final extra missions.”

“The scenes they have added in just get you emotionally involved with the game. I was so bummed when [spoiler]…”

“I’ve never played a shooter with a more well put together, well… everything, than CoD4. I finished it last night as well, if it doesn’t win more game of the year awards than anything else that came out this year I’ll eat my hat.”

“Man, was I wrong. After the 1st mission you are greeted with one of the most amazing cut scenes (that you actually are a part of) I have ever seen in any game.”

“However, it might also have the best interactive story ever put into a first person shooter… or any game for that matter (granted, the Splinter Cell games have a much deeper plot). It is the best war movie I have ever acted in.” 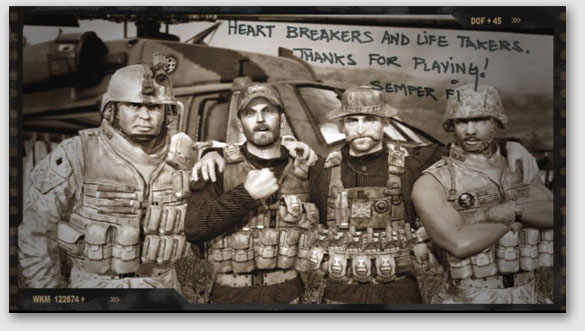 Check out our Land Combat Library! A percentage of the Amazon sales is paid to SimHQ.

26 AIRPLANE PLANS BUILD YOUR OWN VINTAGE ULTRALIGHT AIRCRAFT ON CD