Although a very polished single player experience, it is short. The real meat is the multiplayer experience and with a bunch of friends you’ll have a lot of fun online. There’s a class system which has a few preset classes with default weapons and perks, and the ability to create custom classes (this need to be unlocked first at level 4). Each class has three perks, which are enhancements. Some perks enables greater stopping power for bullets, better conditioning, extra ammunition, increased health and so forth, others add some sorts of explosive devices or extra grenades. But the majority enhances your skills, you’ll have the ability to see your opponents C4 and claymores, jam the UAV, and dropping a grenade when you die which may or may not take your enemy with you. Now, with the right perks, a player can do some serious damage, some might say this can unbalance a game, but there are ways to counter this. After being killed you’ll have first person view from your killer (entitled killcam) for a few seconds where you’ll see where he or she was, how they killed you and what perks that were used. So snipers will not stay hidden for long. 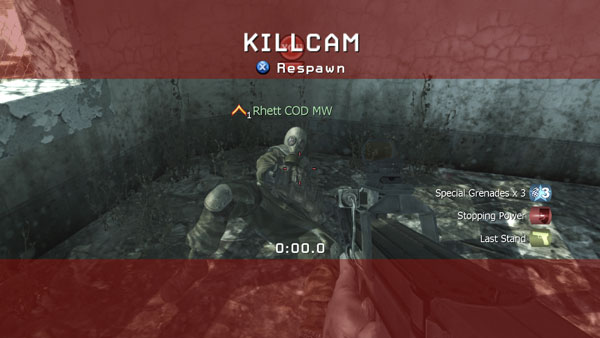 There are 16 multiplayer levels and a large selection of multiplayer modes for up to 18 players. You got the standard Team Deathmatch and Free-For-All, and some objective based modes like Search and Destroy, Domination and Sabotage. In Sabotage each team have a base and there’s a bomb placed in the center of the map. The goal is to retrieve the bomb and plant in your opponents HQ and guard it until it goes off. There’s a Team Hardcore-mode with a limited HUD, increased bullet damage and friendly fire. These and several other modes will give us players a lot of replay value, you will have “Tactical” versions of several modes for a small number of players, and there will surely be downloadable content of Live in the near future. What I really miss is Co-Op, I’ve become too spoiled with games like Rainbow Six Vegas, GRAW2 and Gears of War, and the ability to play Co-Op with a few friends in the SP campaign would have been the icing on the cake.

During online battle you will be able to call in various support units if you perform well by killing the enemy. UAV’s will be available after three kills for a short period of time. The area will be scanned and enemies will show on your radar (if they don’t use the UAV Jammer-perk), and these enemy contacts will also be shown for the rest of the team. After five kills, an air strike will become available and you will then designate an area on the map that will be carpet bombed. After seven kills an attack helicopter will roam the area. Enemy kills from either the chopper or jets will add to your total enemy kills and after you’ve used the chopper, no further support assets will be available to you until you die. But you will be able to keep any support asset if you die, but if you haven’t used any of the support units it will be overwritten if you get enough kills for the next support asset.