The single player story in Vegas 2 takes you to before the incident that occurred in the first Vegas, then during the incident (remember when they reported another team already in Vegas while you were in Mexico) and then wraps up the story and deals with a betrayal.

The single player story is good, with a lot of heart thumping action and good storytelling. I can’t help to compare this game and the story to Call of Duty 4 and you’ll notice a lot of similarities in the two. Both single player stories are on rails. Vegas 2 of course opens it up a little more by allowing different paths, different entries, but you still have to go from point A to point B to point C and so on, till you get through the scripted chapter. Back to the story. Vegas 2s storyline like the first Vegas is good. But it didn’t grab me by the… heart… and tug on the emotions like Call of Duty 4 did.

In the single player campaign, you are the leader of a 3 man team, and you order those men by pointing at a location and hitting a button, or hitting the D pad in a certain direction. You can also issue the AI teammates basic voice commands like “go go go”, “back to me”, or “fire at will”, if you have your headset and microphone hooked up. But I find it cumbersome and prefer to simply point and issue the command via the button D pad. You can order them to you, or to stack on a door, and then you can order them to enter and clear, or use flash bangs or grenades before entering. You can also order them to fast rope, or hook up for a repel down, or climb (which is always a fantastic thing to see and do.) You can also use a snake camera under the door and “tag” priority targets for the AI to engage first. Like hostage holders or leaders. Another new tool to Vegas 2 is the ability to occasionally call in a thermo scan of the whole map you’re in. This is done by the helicopter support you have overhead, but this is for a limited time and not always available. It also has to be “re-generated”. 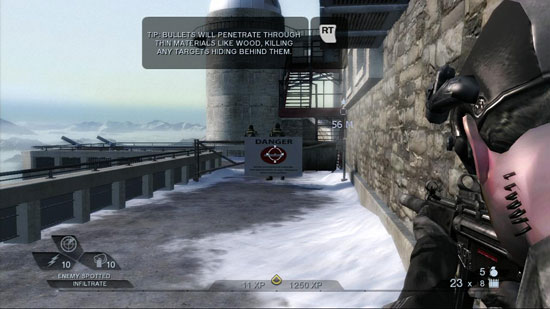 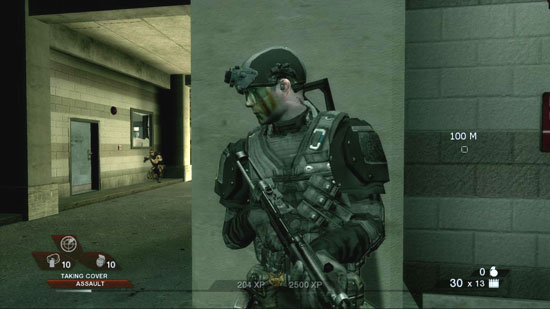 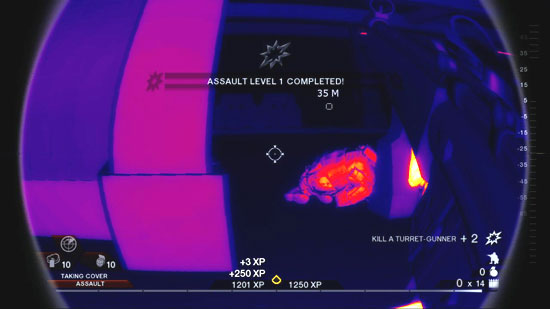 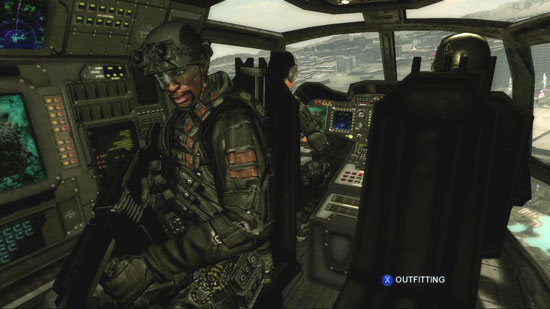 Also new to Vegas 2 is the ability for your character to sprint for a short time. Makes it nice to be able to sprint from a cover position to another cover position. Of course I’ve never seen the AI sprint, so sprinting is more for your survival, and multiplayer mode.

For the most part the AI does well, and properly clears and engages the bad guy. But AI is still not perfect, or even near perfect. Sometimes they get stuck on objects, sometimes they fail to engage the priority target, and even a couple of times I had a terribleLockdown flashback where the AI would throw a grenade and hit the door frame, then of course kill us all. AI, not only in Vegas 2 orRainbow Six games but all video games need some serious work. There were quite a few times I had an AI man go down, even though I know I ordered them into cover. It seems they will move to that cover but if they get engaged they stop to return fire. A better system for real players and AI is to use the great working Ghost Recon Advanced Warfighter (GRAW) slide behind cover, or dive behind cover. But you can’t do that. You also can’t go prone in Vegas 2 either. I understand why, but would be nice especially in multiplayer.

During a couple of the scripted missions in the single player game I did have some serious frame rate lag. At first I thought I was suffering from an extended flash bang, but it went on during the whole segment of that mission. It happened three times. One time being on the entrance way to the recreation building. There were bad guys stationed in the court yard, there were civilians ducking for cover, there was bad guys repelling into the fight, along with bad guys on the overhead walkway. It was a very busy scene and I could tell it was straining my Xbox 360.

Overall the single player campaign was good. No, better than good, but not great. It was a good story, good action, and good tactical decisions. While the friendly AI sometimes couldn’t keep up with the action and the story just didn’t pull me in. It is still very much worth doing once (or twice) but after that it’s pretty much over. Same as in Call of Duty 4.

It should be mentioned that Vegas 2, just like the first Vegas and most other console shooters, uses a checkpoint save system. Sure I would like to be able to save and load from any point in the SP story, but at least they give you plenty of saves, and I had to load up quite a few times on certain parts of the story.

Blurring the Line Between SP and MP

Vegas 2 blurs the lines between single player and multiplayer, and I for one applaud it. You can do the single player story with your 2 AI teammates all the way through. You can do a terrorist hunt on any of the multiplayer maps alone as a lone wolf. Or you can do the story campaign in co-op mode with one other player, and still have the 2 AI units. This is great but I still cannot and will not understand why they can’t make the co-op story at least 3-player (all the ops in the single player), or 4-player like you can in terrorist hunt.

What is great about all this is that friends can come and get into the game thanks to Vegas 2′s join in progress feature. It works great! Make sure you tell a friend you joined there game. A couple of times I was doing a joinable terrorist hunt game by myself, only to have someone pop in right behind me. I panicked and turned-to-engage. Lucky for them (and my score) I miss most of the time.

Another great thing about all this is that what you do in the single player story, the multiplayer co-op story, the single player terrorist hunt, the multiplayer terrorist hunt and the force-on-force game will all count towards your achievements, points, and rank. Now that is a nice feature. Of course, it can be abused by certain players, but if they want to spend hours upon hours on an easy map building points let them have at it.