Like I said previously, you and a friend can play the story campaign in co-op mode with 2 other AI units. The host of the game plays the man character, “Bishop”. The joiner plays the part of “Knight”, an extra man in the story because as “Bishop” you still control the two AI members named “Park” and “Walter”. You can still give the AI orders and call in a thermo scan, but the joiner “Knight” cannot control anything or anyone.

Here’s another nice feature about the co-op story mode. If you die, as long as the other real player is alive, you’ll spawn back in within 10 seconds. Cheap I know, but can come in handy instead of constant reloading.

And finally, “Knight” can come and go into the co-op story campaign as he wishes. There are set achievements for playing as “Knight”, so might be worth joining someone’s game to get those. 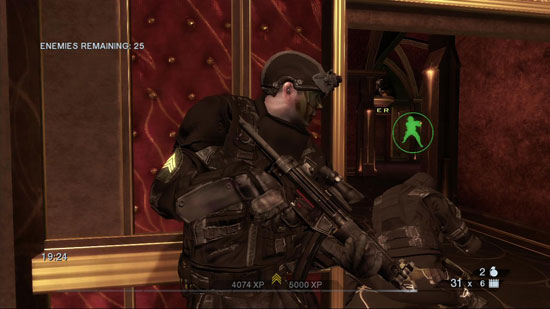 Besides the co-op story mode discussed earlier, there is also the 4-player co-op terrorist hunt. This is the most fun with a small group of friends when working together to exterminate all terrorists on the map. You can choose casual or realistic, both seem harder than the original Vegas which is a good thing. More tactics and teamwork are required. And you share kill points for unlocks and promotions. You simply load up a map, invite three friends, and start hunting down the bad guys.

By the way, with the 2 free unlock/download maps there is a total of 15 multiplayer maps. All are well done. I had read they were too small and yes, some of them are but for the most part they are adequate and a lot bigger than the CoD4 multiplayer maps. There is also four (I think) classic Raven Shield maps remade for Vegas 2. Playing them brings back some good memories of games from yester-year.

In addition to the co-op story mode and the co-op terrorist hunt mode, there are 5 different adversarial modes. One of those modes has 3 sub-modes.

Attack and Defend. Two teams of up to 8 vs. 8 fight for the control of an objective. One team is the assault team, the other the defenders. Then it switches. Attack and defend have 3 sub modes.

Item Extraction is where you have to locate and extract an item, briefcase, to an extraction zone. While the defenders try and stop you.

Hostage Rescue is the same principle but with two hostages that either team cannot kill or you automatically lose.

Demolition. One team has to plant a bomb on an objective while the other team needs to defend the objective and/or defuse the bomb once set.

Total Conquest. Where there are 3 satellites scattered throughout the map, each team has to capture all the satellites and then hold them for 30 seconds while a broadcast goes out. The team that does this is the winner.

The co-op modes are of course fantastic because it only requires 1 to 3 friends to play. The other modes require either a bigger friends list, or for you to join open servers.

There lies the problem, not with just Vegas 2, but most if not all shooters on console and PC servers sometimes. The immature or abusive players. Players who know nothing about tactics or teamwork, or players who are just there for themselves either to ruin others game, or to boost their own arrogant egos. The Xbox 360 with its built-in VOIP is a double-edge sword. On the one hand every game, including Vegas 2 has built in player comms and for the most part done very well, but on the other side is the dark underbelly of online gaming. The abuse of in-game comms is problem priority one. Sure you can mute other players but that takes time to do, and takes away from the teamwork theme. So the solution is, play with only people you know and on a closed server, but good luck getting the 6 vs. 6 game modes filled on that. 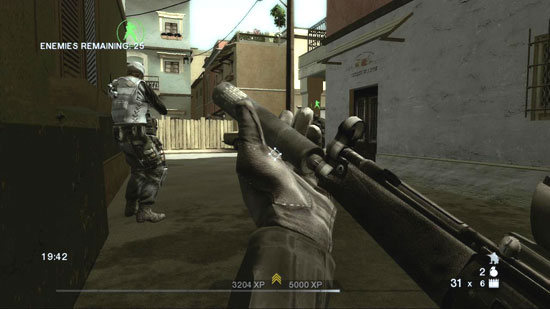 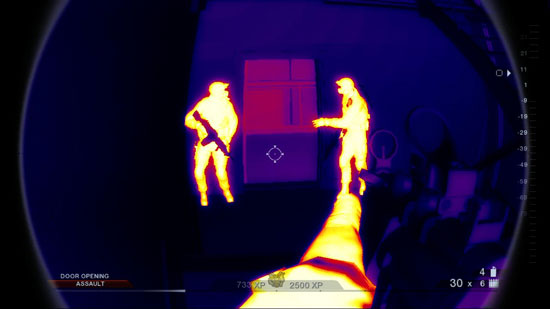 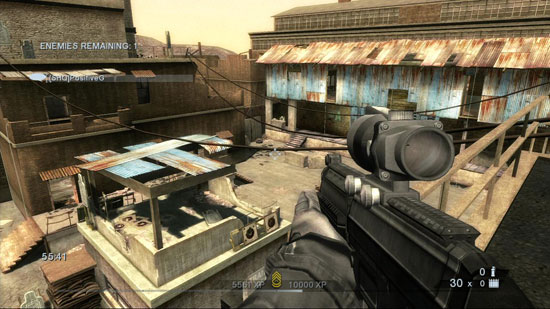 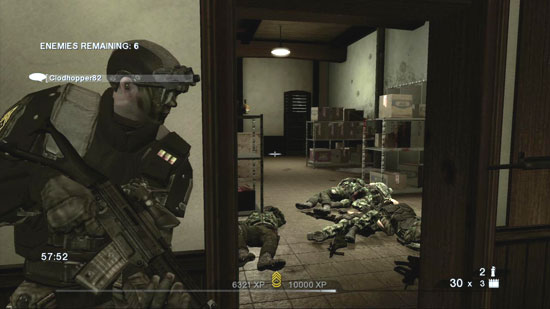 Another note about Ranked matches. I tried a couple myself for the first time ever. You would think ranked servers would have a better, more mature, more teamwork base of players, well it doesn’t. Not only that but after each game, you get kicked out of the rank server and have to spend about 30 seconds to a minute looking for another rank game. I understand why they do it, but this is just plain ridiculous, and I will probably never play a ranked game again. I’ll stick with player servers.