Then, It Was Over

“I really thought it was just a matter of time before we got the win. We knew where they were and we were coordinating an all out attack on the enemy base and HQ, but then Wepps unleashed hell upon our own base, including my HQ vehicle with an artillery barrage that was dead on. I lost 50% of all my buildings and defensives with that one attack.

I figured the enemy had us marked and it was time to pack up the HQ vehicle and move to a new, safer location before the next barrage. I loaded it up and began moving to a forest covered mountainous area, enroute I thought I saw a round, tracer fire or something fly right in front of my vehicle. I called out a possible target, but there was no confirmation on that. The second round slammed into my HQ vehicle, taking it and me out.

The war was over, because I failed to trust my defenses I built. It was later discovered that Dec with another KA-50 was floating out over the sea, at angels 2 plus and was just waiting for the chance to target and engage. The bases defenses, especially the 6 AA platforms could not see that far.”

“The plan was dangerous but it worked. The KA-50’s rule the skies and was the main reason for this victory, with help from the artillery that got Magnum moving.”

Click here to see a 10 image series of screenshots that show the battle maps. 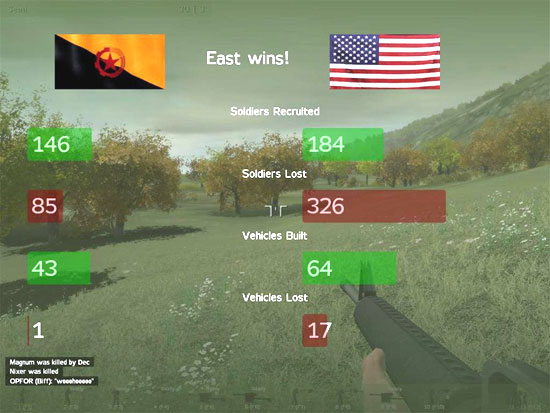 So that was it. It was over.

Well, not quite yet.