Magnum: Thank you for this opportunity, and let’s get right to it. Who is BlackFoot Studios? How big is the team, and what is your basic goal of computer and video gaming?

John: You are very welcome. Blackfoot Studios is a small dedicated studio that focuses on squad based tactical gaming. We love playing truly tactical games based in realism and saw a need in the market that just was no longer being served, so our purpose is to serve that need and enjoy making our games in the process.

Magnum: How big is the company, how many projects do you have going?

John: Our plan is to run a “high speed low drag” studio so our numbers are small compared to the mainstream developers out there. The team currently consists of 7 developers and we have plans to add a few more in the coming months. For me, the sweet spot for the studio is around 12-16 developers, while maintaining close relationships with a few dedicated and talented outsource partners.

Magnum: Is the game still called Sky Gods? And if so, what’s the meaning of the name, if any?

John: Yes, the game is still named Sky Gods (read the announcement here). It’s sort of a strange name really, but in all honesty, most video game names are…. unless it’s tied to a property or something. The name comes from “being a sky god”, a term sometimes used by HALO operators in reference to freefalling. It was originally the internal project name but sort of stuck. 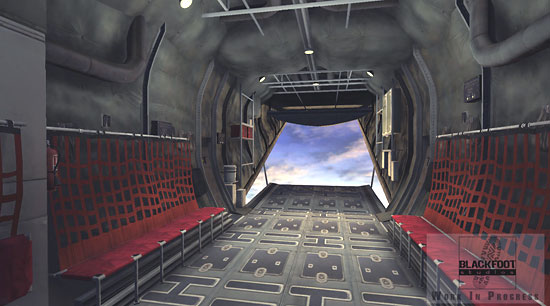 Magnum: Now is this separate from your Ground Branch project? Would you describe Sky Gods as an intro, or light version of ground branch or it’s own entity?

John: It is definitely its own entity even though all of our projects will be derived from the same basic foundation of game mechanics and design philosophy. There is a foundation that we work from, but each project will branch in its own direction from there. Players will get to experience our basic movement and shooting mechanics as well as overall design philosophy in Sky Gods but that is about where the similarities end.

Sky Gods is a string of separate and non-related missions that are played cooperatively or by yourself. There is no continuous campaign or real over arching storyline to follow. You will get the full campaign/story experience in Ground Branch.

Magnum: OK, so Sky Gods is a combat Skydiving game? How would you describe the game and purpose?

John: It is definitely a skydiving combat game but will also involve other aerial insertion methods, such as fast roping form a helicopter. The idea is that you are coming into a mission from above, whether it be via helo or HALO.

In HALO missions, players will start the mission in a C130 and be required to freefall and glide under canopy to their target landing zone. You will have full control while freefalling and under canopy and will be expected to steer yourself to assure a proper landing. It will also be your responsibility to watch your altimeter to pull your chute before it’s too late! We are not going for the huge “open world” approach so there will be multiple large designated landing areas to choose from. If you land outside of these areas then your mission will end, though it will still continue for those that were skilled enough to make a proper landing. This was heavily debated, but in the end we want to keep the project within our means and a super huge open world just isn’t feasible at this time. Once on the ground, you will be a typical Special Operations unit required to carry out missions in various environments. 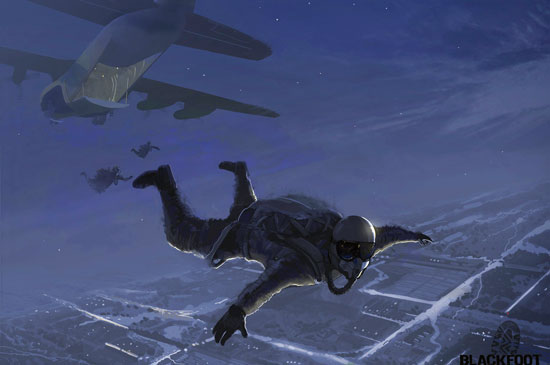 Magnum: Would this be more of a simulation, or training tool, or strictly entertainment?

John: Honestly, a little of all. We are designing the project as an entertaining simulation that has real training value. How is that for an answer!

We want to give the player a true feeling of HALO and other aerial insertion methods to missions as well as a compelling ground experience that conjures up feelings of some of the finest squad based tactical shooters of years gone by. Realism can be fun.
We are also keeping a true training component going that focuses on the events and procedures of HALO/Military freefall that take place. Others have done an excellent job of providing the military with exceptional infantry, mechanized and aerial combat simulation training tools so we are focusing on aspects that are not normally touched on in those circles. The plan is to develop a full courseware and training simulation package. I’d like to note though, that we are not under official contract to do so at this point in time.

John: It is a multiplayer and cooperative single player experience. The main missions are all playable cooperatively either by you or with others. There is no true single player component where it’s you and your controlled AI squad. There are also multiple MP modes and game types that will be available both at ship time and post ship. We plan to support the title well post ship.

Magnum: How will players connect for multiplayer games? Via a service or direct IP?

John: Our hope is to do it both via a service and direct IP. The service is yet undecided, but we are evaluating all the usual suspects.

A Modder’s Diary – Episode I: The Terrain Page 8
An Interview with Blackfoot Studios John Sonedecker Page 2