Right up front I’ll tell you we have a winner, folks…for possibly the worst attempt at a tactical shooter ever made. Yes, Rogue Warrior has dethroned the mess know as Rainbow Six: Lockdown. This one is such a stinker that it arguably competes with the worst of the worst SimHQ has ever reviewed. That would be the ill-fated, much anticipated title, Whirlwind Over Vietnam from back in May, 2007. Now that’s bad.

Please be advised that this write-up cannot be considered a full review. The game is so bad, I don’t care to finish it. I would call this more of a loud and clear warning not to waste your money on this title, even if they drop it down to $4.99 for the bargain bin to sell more than a handful of copies.

So this is a first impression (and probably a lasting impression) review.

I should have known. I should have listened to my gut. When I first saw this game presented at E3 2009, I knew this was not the tactical shooter I was hoping for. It was more of a cross between Doom and Assassin’s Creed, which would seem like a great game, but it is not.

The graphics are okay, but sub-standard for currently released titles. I think the graphics might have been made 2 or 3 years ago. Look at the screenshots below and my video. Caution. Be sure and play the video away from anywhere that you’re concerned about f-bombs and other assorted colorful language being overheard.

Further, I have the game maximized in settings, but get a hiccup every 5 seconds or so. I’m still getting a steady 50 frames per second even while using FRAPs, but the hiccup in gameplay is there. It is very annoying. It is visible in my video too.

Between the terrible background music, the terrible voiceover scripting (well-known actor Mickey Rouke does the main character voice) and the constant, very unnecessary f-bombs, a-holes, and assorted stupid one-liners, there’s nothing to like here. What a waste of Rourke’s professional narrative talent.

I played, or rather tried to play, Rogue Warrior using my Xbox 360 controller on my PC. I leave my gamepad plugged into my computer. So when I went to play the game, it assumed I wanted to play with the pad so it showed the control image of the 360 gamepad in the options and the tutorial overlays were using the gamepad. But the gamepad did not work at all. So then I unplugged the gamepad, then the game gave the keyboard commands, and I was able to play. It gives you Xbox 360 controller tips, but they don’t work. What’s worse than a console port sent to PCs? A console port sent to PCs that has squirrely PC and Xbox 360 controller problems. 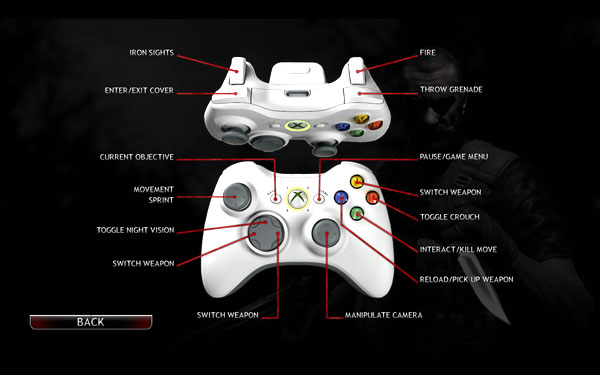 Let me walk you through the first mission.

You get a cut scene where Dick Marcinko (the protagonist) is talking about how bad he is and how bad ass his team is while they are inserting via chopper. You never see the chopper land or fast-rope down; the clip simply cuts to the team on the ground. 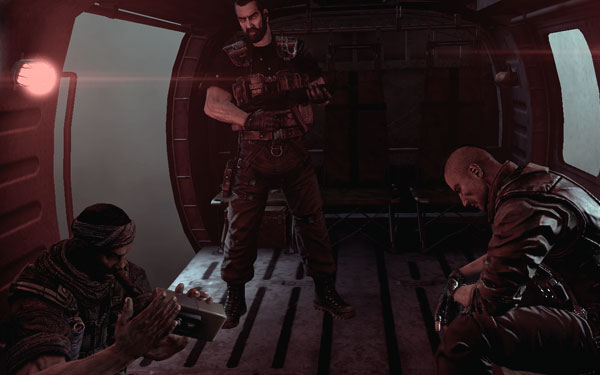 The cut scene continues; your team takes out a patrol of North Korean soldiers. But surprise… the last Korean pulls the pin of a grenade before he dies. Dick Marcinko dives for cover. All team members but for himself are wiped-out. He’s ordered to abort the mission, but says “NO!” and proceeds to add the f-bomb as a preface to every sentence and every phrase hereafter. How could the audio editors notthink this was cheesy beyond belief? Anyhow… so Marcinko takes over all alone to continue the mission. 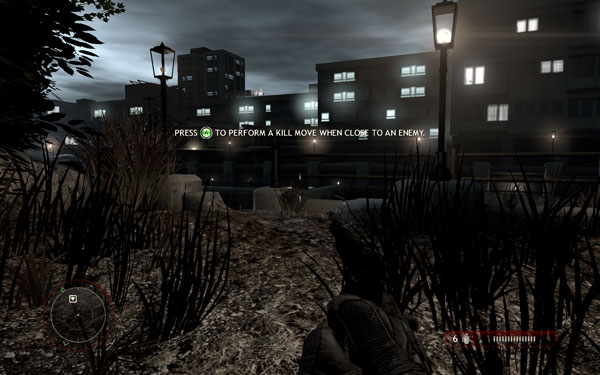 Now there was just a huge grenade explosion 30 seconds earlier not more than 50 yards away from the compound. But no one heard a thing. Guards are standing around, facing the inside perimeter, or patrolling back and forth in set paths. You sneak up behind each one and hit your special kill button (let’s call it “auto-kill” mode), which of course prefaces with the compulsory f-bomb laden phrase. Then you perform a special kill move — you slam a dude’s head into a wall, cut a bad guy’s throat, head butt someone and toss them out a window to guards below. All of the other guards see and hear… NOTHING! You eventually get into firearm combat, but the only AI engaging you is the one you see; the guy next to him, or right behind him, continues his patrol unfettered until you finally kill him. 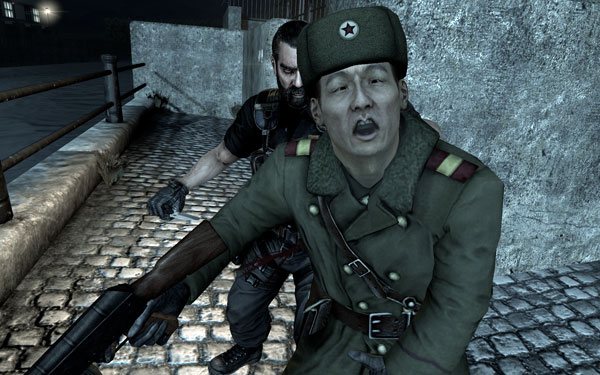 You eventually maneuver into a building, get to shoot out a fuse box to cut the lights and power. Notice in the screenshot below the guard proceeds on his predetermined path without any acknowledgement of the gun blast or fuse box noise. 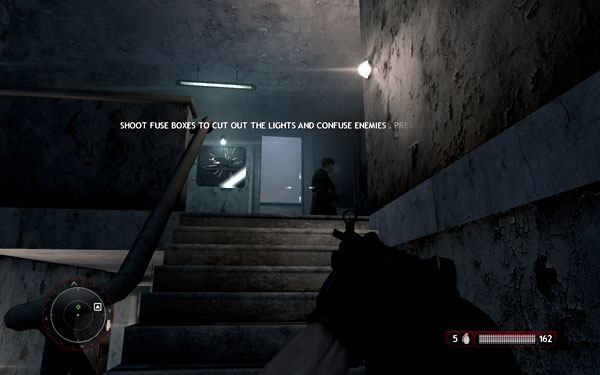 You activate your night vision — which are some of the worst night vision effects I’ve ever seen in a game — and continue to hunt the bad guys. 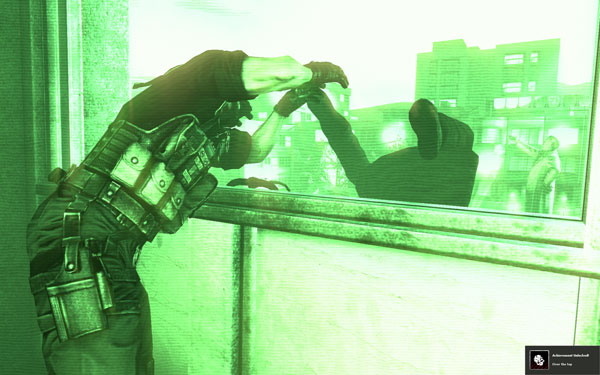 You make your way through the checkpoint save system to the objective. That’s it, mission accomplished. Mission two is structured as a repeat of mission one.

What jokes I could add here! AI? There is none. NONE. Check the video clip below from YouTube, and advance it to 3:00 minutes. Now watch it to 3:30. Caution. As said earlier, be sure and do this away from anywhere that you’re concerned about f-bombs being overheard. Replay that 30 seconds again. Yes, what you thought you saw was correct.

It’s there in-game, ranked and unranked, a leaderboard, death match and team death match. I’ve been trying to join multiplayer — any multiplayer — all day long over the past 12-hours of checking, and haven’t found a single game yet. No kidding. I will let you know if I hear of someone able to connect and play multiplayer. 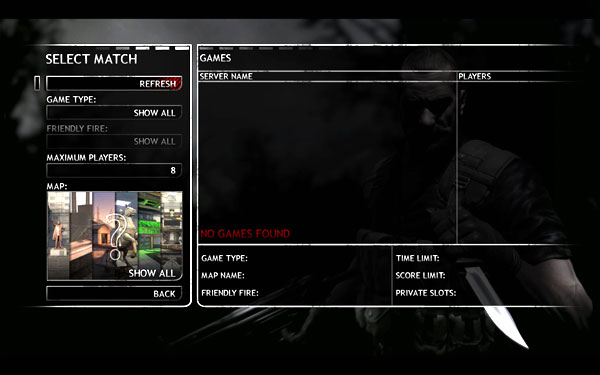 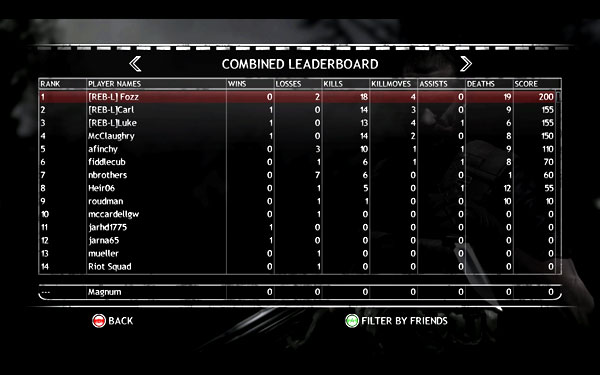 How does a respected game publisher like Bethesda Softworks — who have brought us titles like Fallout 3, and for the elves and dragon fans, Elder Scrolls and Oblivion — release a mess such as this? Do yourself a favor, and DO NOT buy this game. Be smart. It is my worst experience with a shooter since Rainbow Six: Lockdown. There is nothing more for me to say. If you buy it, I’m going to say I told you so, and stick my tongue out at you.