The game comes with an excellent looking Mission Editor, with a good pdf of the editor manual in your “doc” folder. It looks pretty advanced for just an average gamer, but I’m sure the tread heads will love it. I have not used or tested the editor due to a lack of knowledge and time constraints. I play missions, I don’t make them. [Editor’s note: look for an extended mission building article soon]. 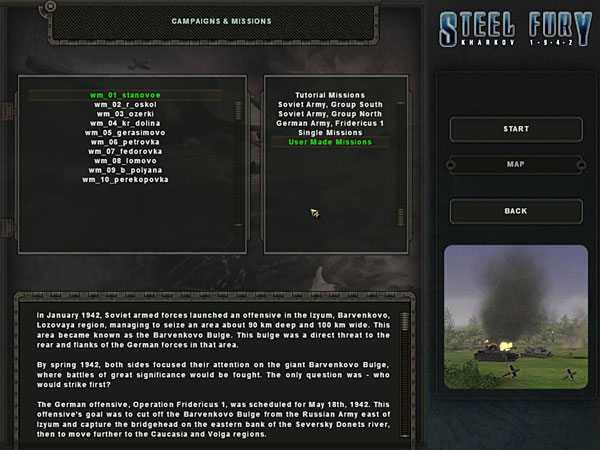 The graphics are incredible, the terrain and environment is modeled well and gives you that WW2 battlefield feel, along with villages and small towns. No major structures like huge concrete buildings or cities. Woods and wood lines mark the battlefield, trees move and sway, and can be up rooted by tanks and vehicles, along with simply being blown up by tank rounds, machine gun fire, artillery and/or air support bombs.

The tanks and vehicles are modeled well and accurate from what I’ve read and seen on the History Channel, in WW2 footage, and books. Smoke and particle effects are well done, without being over the top. When a tank or vehicle takes a hit you’ll see the particle effects from the blast, you may see them burn, flames billowing out, or you just may see them not move anymore.

The game models night missions with dynamic lighting from your tank lights, fire, or aerial flares. You also have adverse weather effects like fog and light rain. The game’s particles allows for realistic smoke and water effects, as well as debris from explosions and equipment.
The sounds are just as good, but maybe not great. The environmental sounds are strong, even with the birds chirping during an artillery strike. The roar of the tanks, the sound of the gears shifting and the engine pushing forward are well done, though a little under powered compared to the rest of the sounds. The sound of the round being slammed into the bore, the firing of the main gun, the different sounds of machine guns. All very well done. Crew men yelling contacts and orders in their native tongue, while the English text appears at the bottom of the screen. More than two speakers shows some weakness with surround sound effects. More could have been done to improve the overall surround sound of the game. 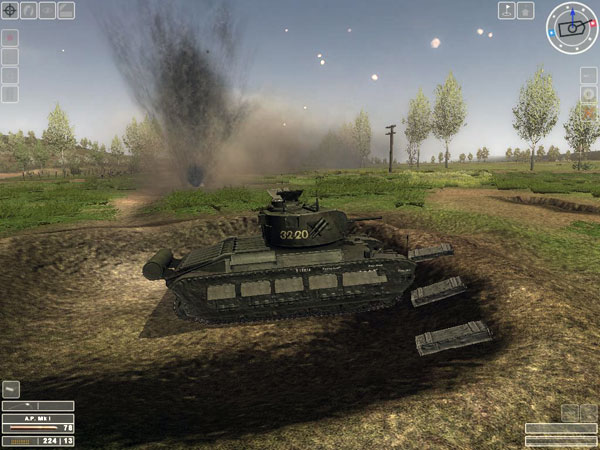