The game’s presentation is pretty good. The PC version utilizes Games for Windows Live, while of course the console versions use their own service. So even though you’re doing a single player campaign or mission, by default you’re signed in and your friends (and friends only unless changed to public) can join any mission in progress and leave at any time, replacing one of your AI fire team mates. Pretty great idea and works really well. Very nice to have a friend join in, take over an idiot AI, help me progress my campaign or mission, then leave. Built in comms via games for windows is utilized, or XBL for the 360, and PSN for the PS3. 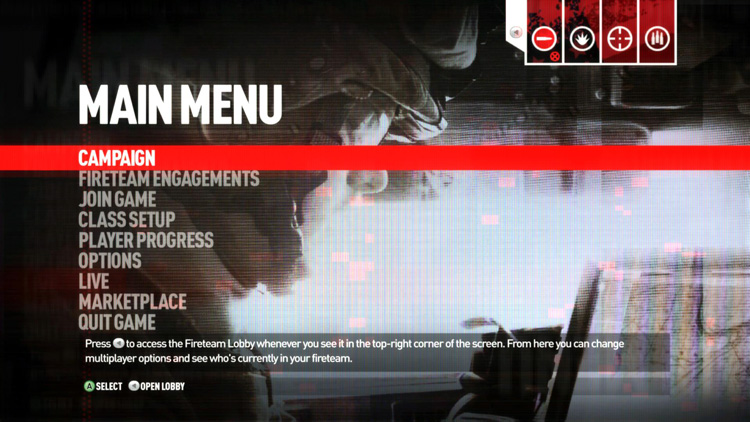 You get a 10 mission campaign, and each mission is about 30 to 45 minutes long, even more if you have to restart over and over again because of too few automatic saves and idiot AI. You also get a series of quick battle engagements that are about 30 minutes long, 4 different types of missions with only 2 missions in each category. With no included mission editor this time, I believe this is too few of provided missions. 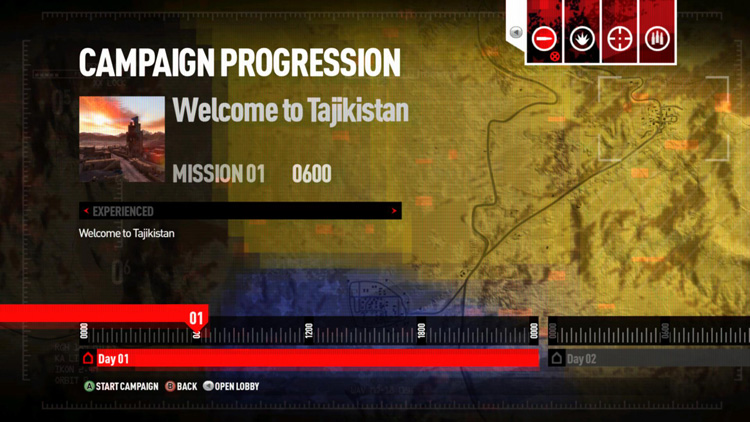 In Red River, Codemasters has dropped the mission editor and provided limited missions to play, and though it does seem that the missions are slightly random in the placement of the enemy units, they are still pretty much the same over and over. In my opinion the cost of this game based on content should be cut in half. I imagine they plan on releasing mission packs for a price, but again they should either be included or free.

Red River does have a simple yet interesting RPG type feature. As you complete missions you receive points and levels. You use those points to add and build up your character. You also level up and as you do you unlock weapons and tools for that character. So I guess in a way this does add to the replay value, because as you level up and unlock new weapons and tools, you can replay missions with the new weapons. A nice idea that really isn’t necessary. And there are 4 characters per fire team to play and build up. 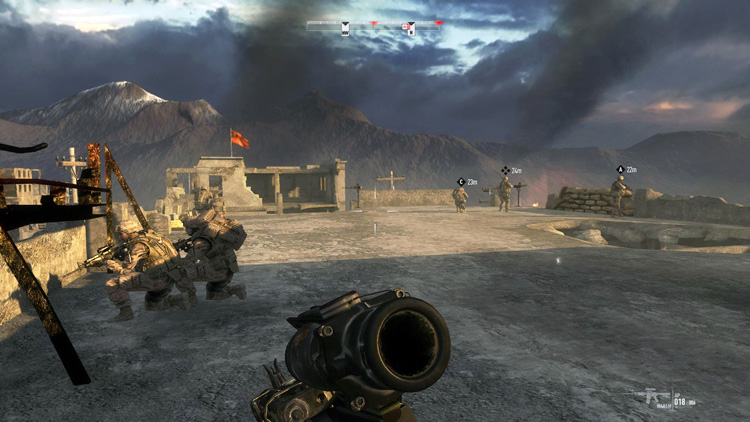 The infantry combat simulated in this game works well and are really fun, especially when you have your 3 AI team mates replaced with real word friends. You’re one fire team leader, Bravo, in a squad of Marines under command of SSG Knots. The sergeant, between his tirades, gives the fire team’s good tactical orders, and Alpha and Charlie team do what they need to do, while you, Bravo team, carry out your part of the battle plan.

The first half of the campaign is taking on insurgents and the missions are actually pretty well done, fun and easy. The second half of the campaign you take on the largest army in the world, China, or PLA in game. And they kick ass with armor, helicopters, and fighter aircraft. Unfortunately due to your team mates being complete idiots when it comes to combat tactics and self preservation, the second half of the campaign is a lot harder and you’ll spend most of your time healing and reviving your teammates. You do have a nice interface to issue commands to your team, like move, flank, suppress… etc., etc., and they do a pretty good job on what you tell them to do. You also have the ability to pull up the tactical map and issue commands to your team via the map controls including clearing buildings and securing locations — both are done pretty well in game. 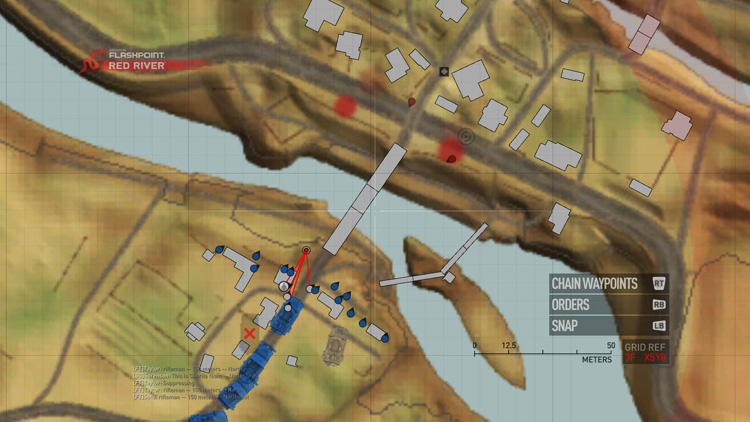 You do get to drive a HUMVEE, especially in the convoy missions, but that’s about it with Red River. Gone are the armor and air units for you to control. I did get a side order to drive a LAV from point A to point B, but I couldn’t find it, so I skipped it.

Combat in game is pretty good and very intense. A lot of action and tactical killing going on including mines, hand grenades, and an assortment of weapons. In game I’ve seen armor and air battles that look beautiful, I’ve called in artillery and rockets, along with A10 close air support. I’ve lobed grenades, smoke, and used many of weapon systems provided. I’ve seen the enemy AI cower, drop to the ground under suppression, and cover their heads in fear. I’ve seen enemy turn and flee, and I’ve seen enemy get wounded and what appears to be another soldier performing first aid. Just like you will do with your AI teammates over and over and over again.

Here is a video of the gameplay.

But I’ve also seen enemy just stand out in the open waiting to be shot, I’ve seen them get stuck behind obstacles, and I’ve seen the dead on both sides disappear within seconds, ruining the battle field feel. You can pick up battlefield weapons, but you have to do this pretty quick because they also disappear.

You do have 3 levels of difficulty, and the only true way to play is hardcore mode, where there is no HUD, no mission markers or hints. But with the idiot AI, without friends, you might be forced to drop it down to experienced or normal difficulties, which give you HUD items, mission icons, and more saves. There are no “saves” in the middle of missions in hardcore mode.

The video below shows the setup, stats, and levels.