A “First Impressions” Look at the Much Anticipated RTS

Empire: Total War introduces a host of revolutionary new features, including true 3D naval combat. For the first time in the Total War series, you will be able to intuitively command single ships or vast fleets upon seascapes rich with extraordinary water and weather effects that play a huge role in your eventual glorious success or ignominious defeat. After pummeling your enemy with cannon fire, close in to grapple their ship and prepare to board, taking control of your men as they fight hand-to-hand on the decks of these wooden behemoths.

In addition, Empire: Total War will see further enhancements to the Total War series’ signature 3D battles and turn-based campaign map. Real-time battles will pose new challenges with the addition of cannon and musket, challenging players to master new formations and tactics as a result of the increasing role of gunpowder within warfare. And the Campaign Map — for many, the heart of Total War — introduces a variety of new and upgraded elements, including new systems for Trade, Diplomacy and Espionage with agents; a refined and streamlined UI; improved Advisors; and a vastly extended scope, taking in the riches of India, the turbulence of Europe and, for the first time, the untapped potential of the United States of America.”

Excerpt from an Atari Press Announcement about Empire: Total War

Empire: Total War™ is a huge cross-bred, turn-based, real time strategy (RTS) game mixed with real time strategy battles. It is one of the most anticipated RTS games of 2009, and by the many comments and reviews I’ve read so far, I’d say the developers succeeded with the game design and game play goals. This will be played for many months, maybe even years to come. Empire: Total War is too big of a game for me to give a proper play and review in a set time, so instead I simply played the heck out of every mode, took tons of screenshots, and will give you my first impressions of this very deep and detailed strategy game.

Both versions come on DVD with a 37-page manual. It does a good job explaining how to install and play, and even some background information of the campaigns and missions. But no information on exact unit types, game play, tactics, or strategies. I would anticipate at least one strategy guide would be produced and released at some point in the future.

Installing is easy and typical. Very easy if you bought it via steam. You simply highlight the game in your game list and click install. Steam will keep it patched and updated. I had no install issues or tech problems besides a replay crash which I’ll mention later. Some people, via the forums, are complaining of crashes due to audio and video drivers. And the unofficial word is a patch is in the works to address this.

This game, even if not bought via Steam, requires a Steam account and utilizes the excellent Steamworks features. Some people don’t care for Steam, and do not like the fact that Empire: Total War is attached to Steamworks, but I love it. It is the answer a lot of my friends and I have been asking for in PC games. A Xbox Live similar program that lets us have achievements in game, in-game comms, friends list with the ability to join games directly and see who’s online and what they’re playing. I for one, praise Steam for what they have done for PC gaming and try and get all my games via Steam now. The biggest beef people seem to have is the inability to resell the game. I don’t see that as a problem and reselling games is probably not good for our support of game developers, but that’s a whole different article for a different time. 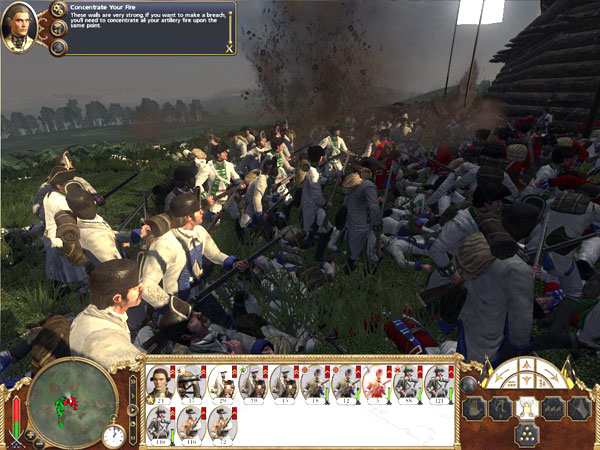