Each of the four maps included with Iron Front show a similar attention to detail. The number of enterable buildings is shocking. Many buildings have operational doors. In the larger city areas, the representation of damage from battle is well modeled and creates countless areas for infantry or mounted guns to hide. Farther in the country, the rolling fields of crops and small farm dwellings seem almost peaceful, until you see the occasional bomb crater or shattered barn. Throughout each of these maps, the trimmings and fixtures do a good job of establishing and maintaining a sense of the era. 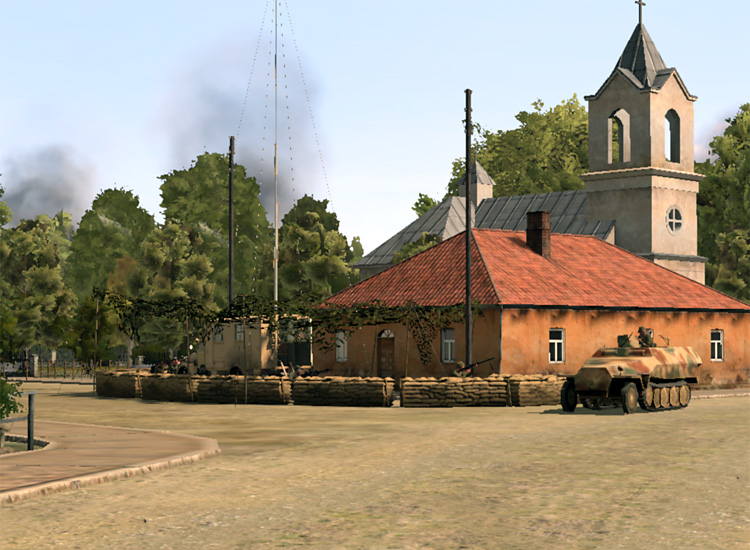 The audio presentation is solid, with convincing sounds for weapons fire, vehicles, and even small things like bullets whizzing nearby. I thought the sounds of distant explosions were very atmospheric. During the campaigns, there are orchestral music backgrounds which sometimes play during peaks of action. The only notable annoyance with the sounds is also pretty frequent… The sounds of your characters footsteps while running often seems much too fast. While relatively minor in the grand scheme of things, hearing my footsteps doing comically high speed does sometimes draw my attention out of the overall presentation.

Performance on my lower spec PC has been better than expected. I am even able to enjoy slightly higher settings (still middle to low) inIron Front that I typically can on Arma 2 maps like Chernarus. And while some players in the forums have reported crashes, I have yet to experience even one. All the screenshots you see in this article were taken with my actual playable settings.

Iron Front: Liberation 1944 is a solid package based on the long running and well supported Arma engine. The content speaks of a close attention to detail and quality, throughout. It includes a base of single player and multiplayer missions that provide a decent start, and the well known Arma 2 style mission editor for quality third party mission options. Iron Front’s unique tank combat experience has been fun so far, and a high point of my multiplayer experiences. Those looking for some World War II based infantry and armor gameplay can find a lot to enjoy in this product.