Robert: First thing I would like to thank you for granting time from you busy day to allow an interview to SimHQ. Would you please give us a little background on your company and the software your company has produced to date?

Vladimir: The company was formed in 2004 on July, 4th. Our main office is located in Kharkov, Ukraine. Our finished projects include: Garden Planner 3D; Armored Car BRDM-2, a training complex for a military customer; Steel Fury: Kharkov 1942, our well-known tank simulation. Projects-in-progress include Steel Fury: Operation Blau, tank simulator; and Front Roads: Kharkov 1943 (working title) tactical war game. Also, our company worked on and is still working on many other projects as an outsourcing provider.

Robert: What is your vision for Graviteam?

Vladimir: We plan to develop further games in the tank simulation and tactical war game genres. Our main interest is in the area of hardcore simulation of military techniques.

Robert: What do you feel are the differences between your products and your competitors?

Vladimir: We try to do historically authentic games, with a accent on a physical component and realistic modeling of damages and shell ballistics. In our games the big attention is given to reconstructing landscapes, destructions and terramorphing.

Vladimir: Right now 5 patches are available, which are made by us. They correct a number of errors and mismatches, add new features, such as destruction and deformation of guns, realistic interaction of techniques with trees and posts. Additionally, the AI has been improved.

Game fans have made a lot of mods that changed and improved various game characteristics. Significantly these include:

Robert: Could you please briefly discuss the reason Steel Fury: Kharkov 1942 has official and unofficial patches?

Vladimir: The publisher did not convert the unofficial patches made by the developers to official. The reason why they did not is unknown to us.

Robert: In your own words, please describe what game elements are implemented in Steel Fury: Kharkov 1942 that you are the most proud about including?

Vladimir: Exacting physical models, including technical details (for example, broken caterpillar modeling), terramorphing and destructions, modeling battles with many tanks in action such as the APCs, SPGs, guns, mortars and infantry units.

Vladimir: Sorry, but I should defer this question to the producer, Discus Games.

Robert: What would be some of the differences we would notice between Steel Fury: Fall Blau and Steel Fury: Kharkov 1942?

Robert: The next big release coming from Graviteam will be Front Roads: Kharkov 1943. Will it be an armor sim as previous titles?

Vladimir: No, it will be a genre tactical war game — a tactical simulation in which the player should operate several platoons, support squads and units.

Robert: What features will Front Roads: Kharkov 1943 include?

Vladimir: Features will include:

Robert: Will the simulation feature multiplayer? What types of modes will be included?

Vladimir: No, it is not planned to be included in the first version. 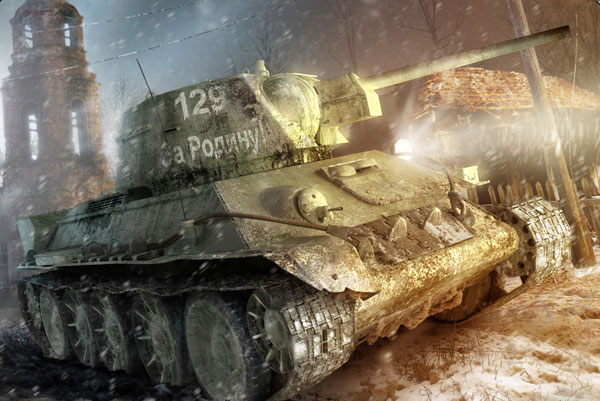 Robert: If you could pick one feature of Front Roads: Kharkov 1943, which one do you think will most excite the simulation community?

Vladimir: The absence of distance scaling. All distances, speeds, sizes, and other parameters of the world correspond to the real world distances.

Robert: When can we expect to be able to purchase Front Roads: Kharkov 1943?

Robert: There have been some discussion that another simulation in the genre of Steel Fury: Kharkov 1942 is planned after the release of Front Roads: Kharkov 1943. Could you confirm if indeed there is a new simulation planned, and does it have has a working title?

Vladimir: Yes, we plan to develop a new tank simulator. But the name has not been decided as of yet.

Robert: Can you tell us of some of the new or expanded features this game will have compared to Steel Fury: Kharkov 1942?

Vladimir: First of all, increased landscapes size, instead of 2х2 km, it will be 6х6 km. A bigger quantity of soldiers in the battlefields with tactical elements and other features taken from the war game.

Robert: Thank you again for allowing us to interview you. We will look forward to the new titles in development.

Vladimir: Thanks to you too! We will try not to disappoint armor simulation fans with our new titles.