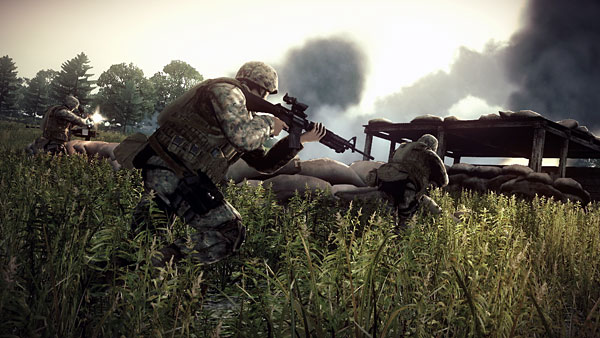 Magnum: Is the PC version a clone of the console version with the only difference being hit gamepad buttons in menus instead of mouse clicks?

Tim: Not at all. The game was developed on both titles in tandem so it is neither a PC game ported to console nor a console game ported to PC. We wanted to make the most authentic tactical shooter we could for both PC and console and though a very ambitious task we feel we’ve accomplished just that.

Magnum: Is the aim more auto-lock with a pad or more precise because of the mouse.

Tim: I’d say you can be far more precise with the mouse. The console version does have what we call aim-assist which slows down the movement when over an enemy. This just allows the player to aim more accurately and can pick out body parts. This is especially useful when you consider that a bullet in the head guarantees an enemy is not going to get up again.

Tim: The orders you can give the AI have been taken directly from the USMC training manual. You can give suppression orders, flanking, defensive and assault orders. On top of this you’re able to control the spread of you fireteam and change their formation to best suit the situations you’re in (or about to be in).

Magnum: Is the urban warfare modeled well, with proper enters into houses and buildings?

Tim: The AI will stack up when entering buildings and they do simulate house clearing as they move through rooms. As our fictional island isn’t densely populated a lot of the fighting is fought over large areas but I think players will be pleased with the CQB areas they’ll come across in some of the abandoned villages, fuel depots and other areas of interest we have in the game.

Magnum: Have you addressed the over-the-top, excessive weapons bounce seen in the E3 demo?

Tim: This was something we were already working on before we took code to E3 but it hadn’t been finished. These issues have now been address so the excessive bounce on the weapons movement when running and sprint has been toned down to something that looks and feels natural.

Magnum: Will there be progressive rank & stats in the game?

Tim: Yes, players will be able to check on lots and lots of stats not only for the multiplayer gaming but also for their single and co-op campaign modes.

Magnum: What copy protection is being used for the PC version?

Magnum: Is there optimization for 2-core processors?

Magnum: Is there optimization for 4-core processors?

Magnum: Is there additional graphics capabilities for video cards supporting DirectX 10 and the upcoming DirectX 11?

Magnum: Will NaturalPoint TrackIR™ 6 DoF support be included with the PC version?

Tim: We do support Track IR but not all of the 6DoF

Magnum: What controllers are supported? Are gamepads, flightsticks, wheels, and HOTAS for the PC version supported?

Tim: The Xbox 360 controller is fully supported. We’ve used several different joysticks as well for testing and they worked fine.

Magnum: Can the PC version be played with the Xbox 360 gamepad?

Tim: Yes you can plug in the Xbox 360 controller in the front end and the game should automatically recognize it and change all of the iconography for extra accessibility (it will revert back if you remove the pad).

Magnum: Will the PC version have in-game comms?

Tim: Yes we support VOIP and type chat for people who don’t have (or choose not to use) mics.

Magnum: Will there be a dedicated server capability for the PC?

Tim: The game will not ship with dedicated servers however it is something we’re considering support at a later date.

Tim: As well as some bonus content that some player will be able to access with pre-order offers and with the codes obtainable by playing the Operation Flashpoint: Dragon Rising web based mini game we do plan to release more single mission content in the very near future.

Magnum: With only the PC getting the mission editor, how will replayability effect the console versions?

Tim: Due to the open world nature of OFP:DR we feel that there is plenty of replayability what with being able to play through the entire campaign co-operatively with 3 other friends. Additionally we plan to fully support the community with lots of downloadable content.

Magnum: How many total missions are in the campaign?

Tim: There are 11 campaign missions in total.

Magnum: How many hours to play the campaign?

Tim: To just do the primary objectives (there are additional secondary and bonus hidden objectives) each mission should take between ¾ of an hour to 1 hour 15 minutes.

Magnum: Are the campaign missions replayable?

Tim: Absolutely. As I mentioned before you can play through the entire campaign and the additional FTE’s, co-operatively with 3 other friends. Also the player can approach each mission from a completely different style and see how it works out for them.

Magnum: Do the campaign missions have random activity and events, or will they play out the same each time?

Tim: No the AI is very reactive to what the player and the friendly AI forces do so players will often have different experiences with the game. The game also allows you to attempt to complete objectives in all manner of ways which will add to its replay value.

Magnum: What is the number of players that can play co-op multiplayer for both the consoles and the PC?

Tim: We allow up to 4 players to play on both platforms co-operatively.

Magnum: Can a full squad of 8 to 12 humans play MP co-op missions?

Tim: Not currently though it is something we’re looking at expanding on possibly for the future.

Magnum: Why does each human player have to have a fire team of AI with him, can’t it just be a group of human players?

Tim: Actually you can have an entire fireteam of humans in multiplayer. The fireteam leader would also act as the squad leader though so they would be in charge of the other AI controlled fireteams.

Magnum: Will console gamers be able to lock the game room, and only invite friends to a closed session?

Tim: Yes they can. We know that there are plenty of console gamers out there that player clan matches so we deliberately made sure that they would be able to have completely private games if they wanted to.

Magnum: Will either version allow join the game in-progress for the co-op campaign?

Tim: We don’t support join in progress. However should a player drop out in the middle of the game rather than you being 1 man down the AI will take over that position.

Magnum: Will all three platforms be released on the same day?

Tim: They are October 6th in the US, October 8th in Mainland Europe and Australia and October 9th in the UK.

Magnum: Will the PC version be sold as a digital download and by whom?

Tim: Yes the game will be hosted on Direct2Drive and Steam.

Tim: Yes we have plans for DLC and more details will be coming soon about that.

Magnum: Are you already planning add-on modules, or is it dependent on sales of the core OFP:DR game?

Tim: We can’t really say any more on this other than all avenues are being considered and we’re already working on lots of DLC for the future.

IL-2: Cliffs of Dover: An Interview with Oleg and Ilya