Battle Academy is a WWII turned based strategy game. It was released a while back for the PC and Mac platforms, and since has spawned a good following. The iPad version was released in April 2012. The initial price of $20.00 for the app put-me-off since most game apps are usually $5 to $10 USD. But after some serious time with Battle Academy on iPad they deserve every dollar. Battle Academy is not some “dumbed-down” mobile version of the PC and Mac versions, it is a full version with all the add-ons and updates. The interface is designed in comic book art style (or graphic novel style as it is better known). It works well with the content.

Battle Academy is a turned-based game, where each side — whether it be against the AI or a human — orders his / her units based on movement charts, and action charts. Engaging targets or withdrawing them. The gameplay is a lot more detailed than you might expect. It covers things like ambushes, line of sight, artillery barrages, air strikes, scouts, morale, APCs, flame throwers, heavy bombers, snipers and suppression. The total package has you controlling one of five countries, along with over 100 different units in different battles, different areas, and different terrains. 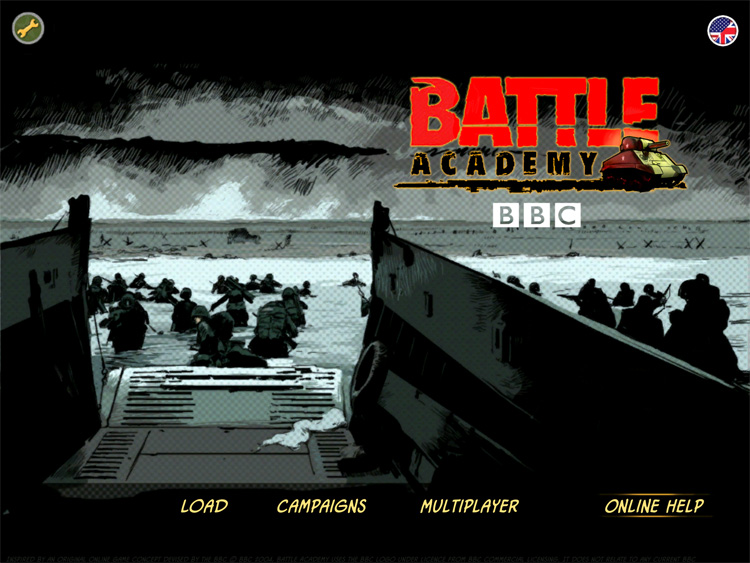 The single player starts with a well done tutorial mission that explains the ease of use. You double-tap a unit to activate it, click on a terrain, location, or enemy and other icons pop up like attack, bombard, or movement types. It is unit sensitive, and you make your selection. After the tutorial you click on one of the 9 campaign packs, which open up a nice illustration of the overall campaign, then you click on one of the provided missions, which opens up another illustration showcasing the mission, followed by a map explaining the objectives. It explains enough to get you into the mission. 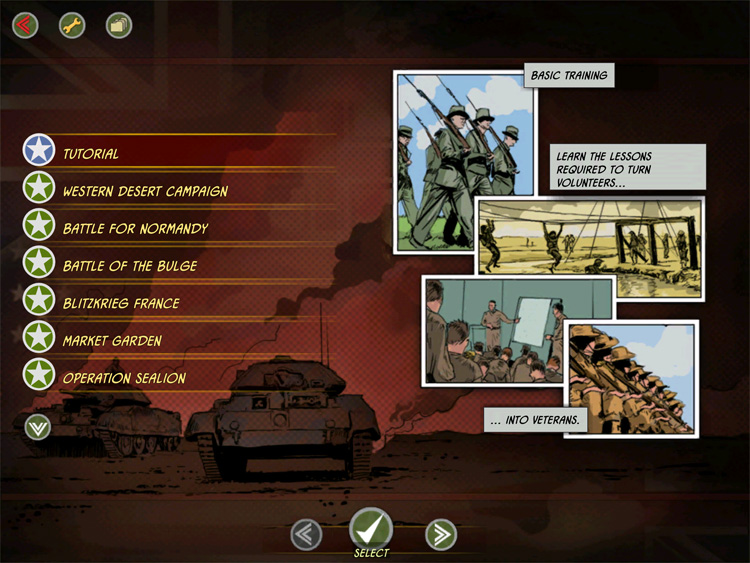 Multiplayer mode is provided by Slitherine’s servers. Whether you play your turn on the PC or the iPad, the end turn gets uploaded and your gaming partner gets it in their turn list. It is well done and quite easy. You can type a message before you upload to the server that your partner can read upon opening it.

The missions are well done, and maybe realistic, but at times they do feel a little unbalanced.For example, in a mission I just completed with SimHQer “Airdrop”, there a battle over a bridge and surrounding areas. It seemed I got a lot more armor and support units then he did, and by the end of the game it seems unfair — I still had 4 tanks in the rear and he had none.

Another example was a game with fellow SimHQer “Kludger”. I was in a defensive position with 3 tanks, 2 guns, and infantry. He steam rolls over me with quite a few armor units, and now with 5 turns left I’m down to two infantry units to stop the assault. You just know you’re doomed and have nothing to counter attack with. That just didn’t seem balanced from the start to me. Maybe that is how it was for that battle, based on data or history? 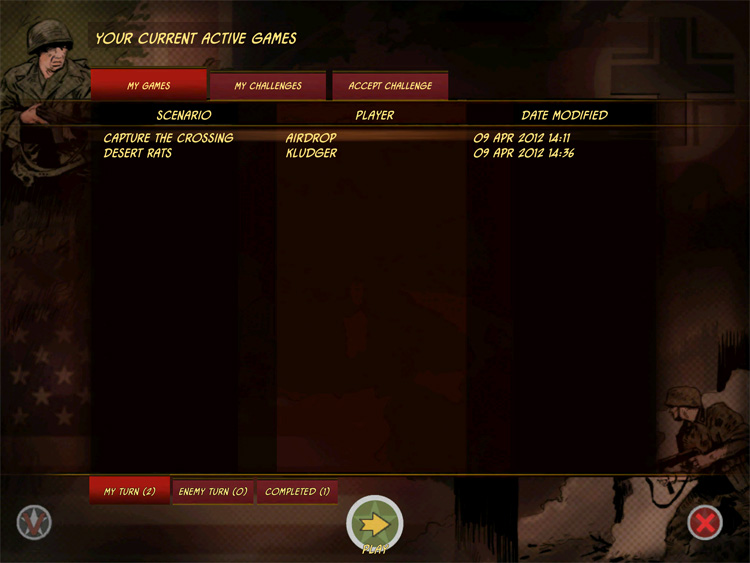 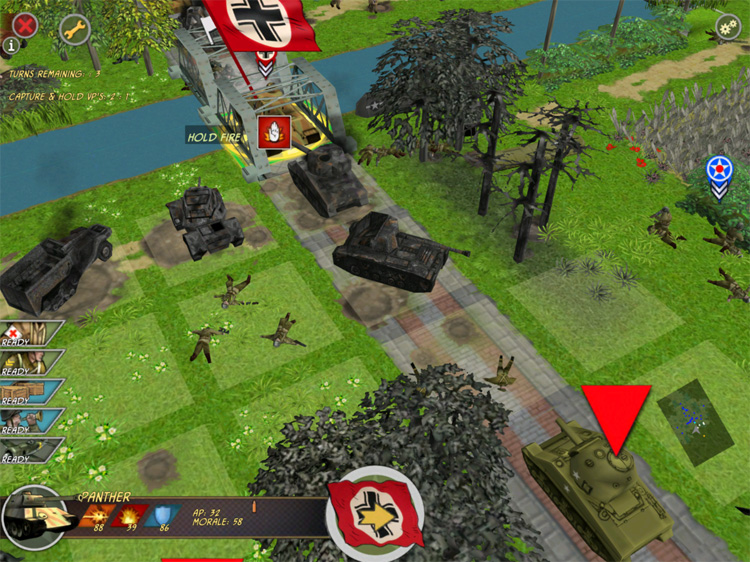 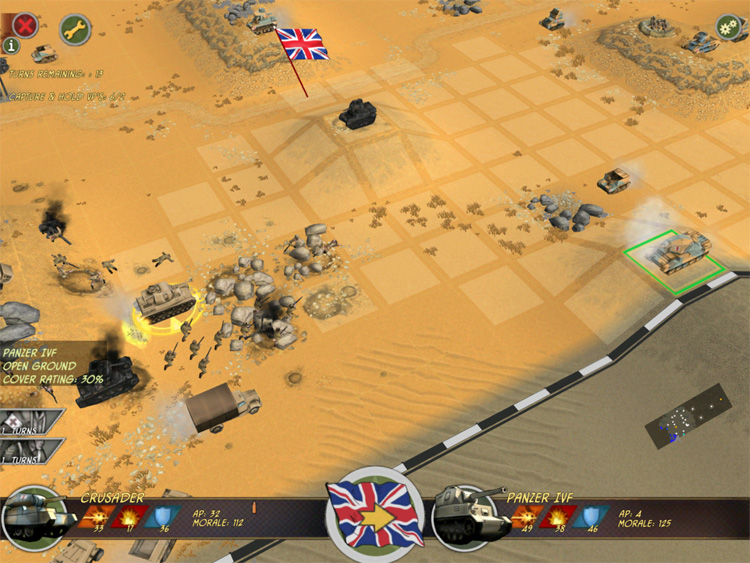 The PC version can be modded, and custom missions created. There are three add-on packages for the PC and Mac platforms. These are included in the iOS version, but for more money via in game purchases. I think they all should of been in there and unlocked for the full price of $20 USD. What is nice, even for the iPad version, is the ability to download user made missions for both singleplayer and multiplayer. So even though Battle Academy contains around 30 missions, you can always get more.

In my opinion, to date, this is hands down the best gaming app ever made for the iPad. Its success has a number of other Sliterine games coming to iOS.

A patch came out within days of release that fixes a few problems and even added better quality to the graphics for the iPad 3. This is no watered down version, this is the full thing. You can play your turns either on PC or the iPad (if you have both versions). The graphics are great and very do-able. The sounds are very good including audio clues on troops morale and conditions. Though if I hear “we’re doomed” one more time I’m going to shoot them myself.

Gameplay is easy and realistic, and plenty of content is provided.

The $20 USD price might scare you off, but you do get what you pay for. I think after the patch’s release this “app” is well worth it.

The only complaints I may have about the game are minor. For example, mistakenly doing something and not being able to undo it before submitting my turn. Or thinking I have one unit selected and move it to a position, only to see the last unit I was dealing with still selected moving. Also once in awhile it takes time to double tap the right unit when they are close together. But that’s more my big, fat fingers than the game itself.