Sonalysts adds a few more goodies with each iteration of the 688(I) series. There appears to be a real “if it ain’t broke, don’t fix it” philosophy that adds on to existing, working software new features. Unlike other developers, they add and build on proven product, which is a business software development model I’m surprised we see so little of in entertainment software. Oleg Maddox’s IL-2 series is about the only recent series that develops in this fashion, though Igor Tishin’s Eagle Dynamics company is beginning to go the same way with Lock On, and it’s an exciting trend in my book. When Sub Command came along, the Los Angeles class were joined in the virtual controllable sea by the Seawolf and Russian Akula attack submarines. This development brought Russia, a major player in military submarines, for the first time into the sub sim world and allowed a player to captain an operational Russian attack submarine. This brought simmers to their feet and Sonalysts got just kudos for their work. Even Americans like to fly the military hardware of non-American countries. It’s cool to see the world’s military hardware in action. We see our nation’s best and boldest in action on the PC frequently, and though we love our F-16s, F/A-18s, nuclear subs, and Abrams tanks, the chance to drive an Akula, fly a Mirage or MiG, or roll around in a T-72 is a sort of fun military voyeurism that most of us will never get to do for real. 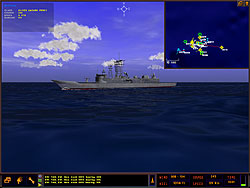 DW adds some interesting things to the Sub Command arsenal. First up is the Oliver Hazard Perry class guided-missile frigate. Of all the choices of Western surface-warfare units, this one is probably the best one Sonalysts could have made from a sheer public-appeal standpoint. Why? Because everyone likes to virtually sail for his or her own navy, and thePerry class is in service with navies all over the world, including but not limited to Spain, Australia, New Zealand, the U.S., and Turkey. It’s almost the universal good-guy, the F-4 Phantom of ships. The Perry frigate in game boasts the “one-armed bandit” Mark 13 missile launcher, capable of firing Harpoon anti-ship missiles or SM-2 “Standard” surface-to-air missiles. Standard also has a limited anti-ship capability and this appears to be modeled; in playing the beta I was able to target a Standard onto a surface unit and fire, though I was out of range when I did so. The Perrys also boast the U.S. Navy’s OTO Melara 76mm automatic cannon, wire-guided torpedoes, and two, count ‘em, two SH-60 LAMPS III helicopters. You can call “green deck” on the helos and launch them, and plot courses and give orders to the pilot through your ASTAC, the air controller aboard the ship. Several stations are modeled, from the bridge, to the radars, and sonars, and damage control. All stations will operate by AI unless you take them over yourself. You can even control a .50 Ma Deuce yourself for taking on small ships. 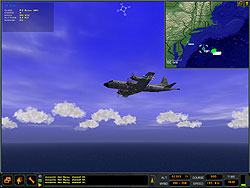 Also modeled is the P-3 “Orion” four-engined aircraft. Its function is antisubmarine patrol, and you can drop sonobouys, stream the magnetic anomaly detector, and hunt for enemy submarines, and drop torpedoes form the internal bomb bay. You can attack surface targets with Mavericks, and loadouts are player controllable. A word of warning, players-you can take the cockpit of the P-3 but this is not a flight simulation. The P-3 handles poorly and the views and cockpit controls are not realistic in any way. That’s not the purpose of the P-3 in game. If you want a flight sim, get a flight sim. The purpose of the P-3 is to take command and order your crew to get the job done. Command is the name of the game. You’ve got the systems at your fingertips, and they’re incredibly detailed. Also controllable is the LAMPS III MH-60 Seahawk helicopter. Like the P-3, you can control it and fly it. However, I have to stress that this is not a flight sim, and you don’t have the control fidelity that you may be used to from games like the Enemy Engaged series or Longbow II. As in the P-3, its systems modeling is excellent. You can drop sonobouys and employ its various weapons systems. But the goal in this sim is tactical comand rather than pilotage. 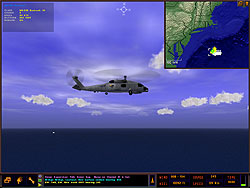 If you’re an old Sub Command or 688(I) hand you now what I’m talking about. Let’s be frank about this: DW’s greatest strength is in submarines. The old players are here in all their glory and their systems modeling has been fine-tuned. If you’ve ever wondered what it’s like to be a sonarman on a sub, here’s your chance. Sounds are well done, and you have tools at your command to identify and classify contacts and intelligence funneled to you by your electronic and visual sources. You can pick up the USNI Reference, a tool Sonalysts designed to give you fingertip access to the platforms in the game, and use it to identify and classify your potential foe. We’ll take a look at how it works with the third and most interesting of the new platforms, the Kilo class diesel-electric submarine.

Kilo is billed by its Russian builders as the quietest fish in all the seven seas. More silent even than an American attack sub, and cheaper to acquire and operate. It is in service in at least four navies, those of Russia, Iran, India, and China. I’m going to turn this story over to a friend of ours who’ll introduce you to the Kilo class submarine Novorosslysk, a deadly killing machine, and her crew.

Well, my friends, we meet again, yes? It is a quiet time today. We are taking a break between missions, and I have another relative who has come to call. We are a close-knit family, all of us in the military in one way or another. You have met my grandmama already, who has taken a temporary apartment in Sochi, near the sea. You did know that Sochi is Russian soil, no? You see why we are so interested in the Sheikh and his depredations just over the border in Georgia and now we find that the dog Basayev in Chechnya is allied with him. War is close around us. And I have found that I, my grandmama’s erstwhile protégé’, am not her only reason for visiting our fair city.

Recently, I perused intelligence files in our Commander’s office. I can tell you of this now, because their subject is now no longer a threat. I now know why this is, and so shall you. We were planning a preemptive strike on Alvand, a Vosper Mk V frigate of the Iranian navy. You may wonder why. Our Turkish neighbors are the reason why. They are now playing at strict neutrality, because their mullahs are about to fall from power. We are often heartened by the Turkish desire for freedom. Once, they nearly joined the European Union, after all. Even though they follow Muqtadeh’s religion, the Turkish public has no stomach for a war in Georgia and they are tired of it. We gladly hear that the Ataturk faction is rising in power. I think often of my friend Kemal, of that faction, to whom I owe my life and my escape from the Suhumi airbase. I hope he is well. But I digress.